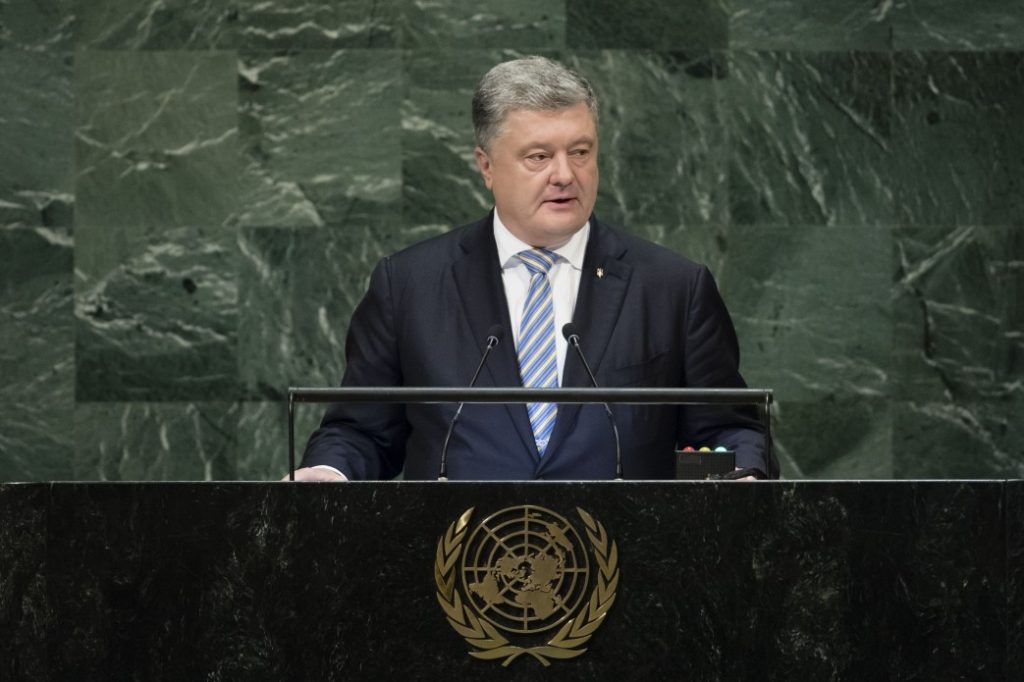 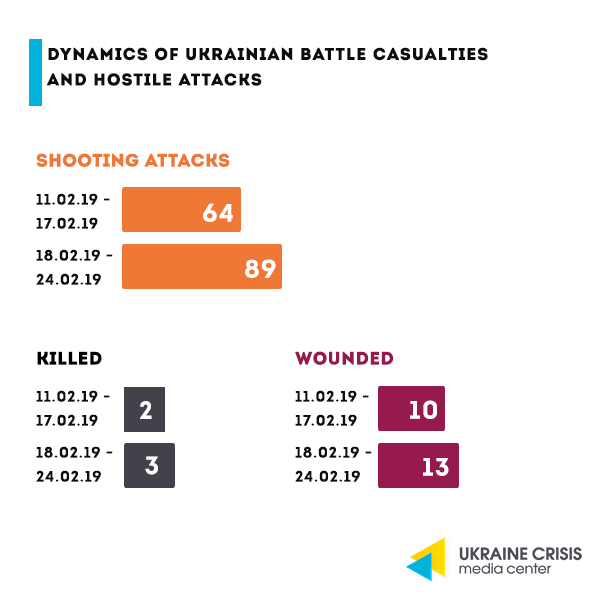 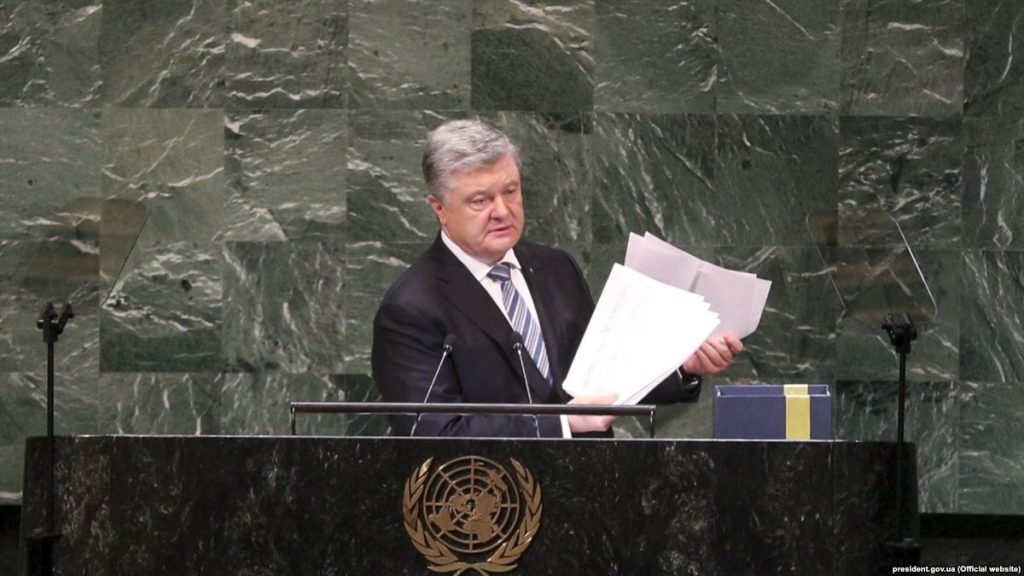 On February 20 the President of Ukraine Petro Poroshenko made a statement at the United Nations General Assembly on the Russian aggression against Ukraine touching upon the most painful issues for Ukrainian society – the annexation of Crimea, the war in Donbas, Russian propaganda and the deaths of Ukrainians as they stand against the aggressor. We herewith quote the highlights of the President’s speech.

The war in the east. “Russia has started the war against its neighbor, whom it calls ‘brotherly’, and it is showing no intention to stop. (…) First, Russia grabbed Crimea, then it turned Donbas into a battlefield, and then it continued its aggression in the Sea of Azov, the Black Sea and the Kerch Strait. As a result, 44 000 square km, or 7% of Ukraine’s territory, including Crimea and eastern parts of the Donetsk and Luhansk regions, are currently under occupation,” Poroshenko said. The President also reminded that Russia’s armed aggression had already claimed 13 thousand lives and had caused over 28 thousand injuries. The number also includes 298 passengers of the MH17 flight downed by Russian troops from the Buk missile system in July 2014. Over 1,8 million Ukrainians living in Crimea and Donbas were forced out of their homes.

Regular Russian troops in Crimea: “I witnessed it”. “The vote was held at a gunpoint, and it was nothing but part of the Russia’s aggressive plan. Let me repeat: the referendum in March 2014 was a fake. I witnessed it myself when I was in Crimea in late February 2014. I came right at the door of the Crimean Parliament to talk and to stop the farce. Alone. Without any security. I saw myself that it was encircled by the Russian military. It has absolutely nothing to do with democracy, nor with the free will of people,” the Ukrainian President said.

Militarization of Crimea. President Poroshenko said that as of February 2019 Russia has deployed up to 32,5 thousand troops, 88 artillery systems, 52 multiple launch rocket systems, 372 armored fighting vehicles, 113 fighter aircraft, 62 attack helicopters, six warships and six submarines equipped with Kalibr naval cruise missiles in the occupied Crimea. ”One cannot exclude eventual deployment of nuclear weapons in the peninsula. The infrastructure is already there, and Russia has used the past five years to restore and modernize it,” Poroshenko added.

Peacekeeping contingent. “I am still a strong believer that an UN-mandated multinational peacekeeping operation with a clear objective to end the Russian aggression and restore Ukraine’s sovereignty and territorial integrity could be a decisive factor in bringing peace to Donbas. We are ready for a constructive discussion of this initiative,” the President said. He also emphasized that it is crucial for Ukraine that the peacekeeping mission in Donbas has its mandate cover the entire occupied area including the state border and that the respective decision to deploy it will also foresee the withdrawal of Russian troops and their weapons from Ukraine’s territory as well as dissolution of all illegal agencies and armed groups.

How Russia is laundering money in Swedish banks

On February 20, 2019 the Swedish television broadcaster SVT released investigation results – a TV show and a dozen of articles exposing the money-laundering mechanism in Sweden also in use by Russia to launder the money. The Ukrainian media “Ukrainska Pravda” translated into Ukrainian the investigation’s key findings of which we are quoting the main ones.

Turns out Swedbank – one of the biggest banks of Sweden, has been involved in a large-scale systematic money-laundering for years. The money in question – USD 5,8 billion, was transferred from Swedbank’s branches in the Baltic States.

In the past five months the SVT TV channel analyzed the classified documents describing the interaction between Swedbank and Danske Bank – another Scandinavian bank already charged with multi-billion money laundering. Swedbank’s 50 clients simultaneously falling into several money-laundering risk indicators, transferred USD 5,8 billion through the bank between 2007-2015.

Russian money: Magnitsky trace. There is evidence that USD 26 million is linked to the Russian tax evasion once discovered by lawyer and auditor Sergey Magnitsky that led to his death in the Russian prison. In 2012 the US approved the so-called “Magnitsky Act” introducing sanctions against the Russian citizens involved. There’s a recent discourse suggesting that the law should be also implemented to bring liable the Russians involved in the attack on Ukraine.

Back in 2007 in Russia it became known that USD 230 million was spent from the Russian budget as fictitioustax return. The money in question was paid by the investment fund Hermitage Capital Management of the US financier Bill Browder.

The fund’s tax accountant Sergei Magnitsky was tasked with the investigation of the fraud. He discovered that there were judges and law enforcement staff involved in the crime. He passed the information he found to law enforcement and was arrested by police. Some time after, during the pretrial detention in “Byturka” jail Magnitsky fell ill with acute pancreatitis. After a year in custody he was found dead in the prison cell with traces from handcuffs and of the physical assault. Whether he died because of the lack of treatment or he was murdered is unknown, but there’s a general opinion by the international community that the Russian authorities are to blame for his death.

Despite the unprecedented coverage and international pressure, no one was held liable for it and the theft of the USD 230 million was not investigated. Judges and law enforcement staff, against whom Magnitsky had collected the evidence are still in office. 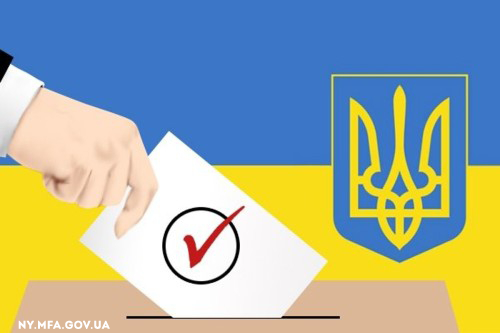 At the presidential elections Ukrainians are ready to cast the majority of votes for the showman Volodymyr Zelenskyi (23,8 per cent), the actual head of the state Petro Poroshenko is running second (20,3 per cent) followed by the Batkivshyna party leader Yulia Tymoshenko (15,9 per cent). These are the results of the recent opinion poll by the Center for social and marketing research “Socis” released on February 22. The numbers refer to the respondents who said they will vote and made up their mind. The ranking continues with the “Opposition Platform” leader Yuriy Boiko (11,5 per cent), “Civic Position” (Hromadyanska posytsia) party leader Anatoliy Hrytsenko (6,6 per cent) and the “Radical Party” leader Oleh Lyashko.