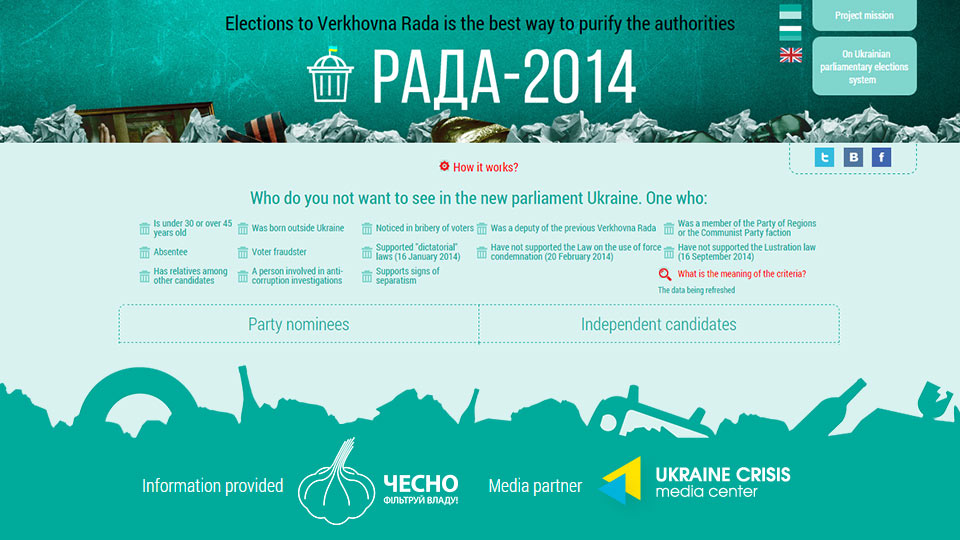 On 26 October 2014 votes of the Ukrainians are going to establish the way the country is to follow after the Revolution of Dignity. This year became a milestone for cardinal change in the country. The primary objective is not only electing a new parliament, but changing history.  Purification of authorities as well as efficient and open politics conducted by newly elected members of parliament are at stake.

RADA-2014 website /rada2014.com.ua/ has been created in order to help a voter learn who is who among the candidates for people’s deputies of Ukraine and make his reasonable choice.

Rada-2014 is a simple interactive visualization instrument for the parliament of 8th convocation.  The web-site gives a possibility to see the “seamy side” of each parliamentary candidate, evaluate potential of members of a party force and build your own picture of the future Verkhovna Rada of Ukraine as well as people’s deputies’ “purity”.

The candidates’ evaluation is made on the basis of information from open sources and documents that candidates presented to the Central Election Committee or provided upon request of “Chesno” movement. Publishing information on parliamentary candidates, the project coordinators adhere to principles of objectiveness, balance, validity, reliability and accuracy of the distributed information.

The project has been developed by the Marketing communication agency RAM 360, with the support of”Chesno” civil movement and Ukrainian Crisis Media Center (UCMC).

Sorry. No data so far.