Kyiv, September 29, 2014 – “Within the last 24 hours due to the implementation of President Poroshenko’s Peace Plan 30 more Ukrainian servicemen were liberated from captivity. 27 of them are the servicemen of the Armed Forces, 2 of the National Guard, 1 border guard. Over 1000 Ukrainian citizens in total have been liberated during the ceasefire. At the same time regardless of the ceasefire mode ATO forces in Donetsk and Luhansk regions are being continuously shelled by terrorists and Russian mercenaries. Yesterday terrorists shelled Donetsk airports with mortars, afterwards made an attempt to capture it. Within the last 24 hours our servicemen repelled two powerful attacks. During the evening attack a Ukrainian APC with the crew and troopers on board was directly hit by a tank. Intensive combat started. Our troopers suffered losses. Nine Ukrainian servicemen died, 27 wounded in the last 24 hours,- reported Colonel Lysenko, the National Security and Defence Council Information Center spokesman at his press briefing at the Ukraine Crisis Media Center. 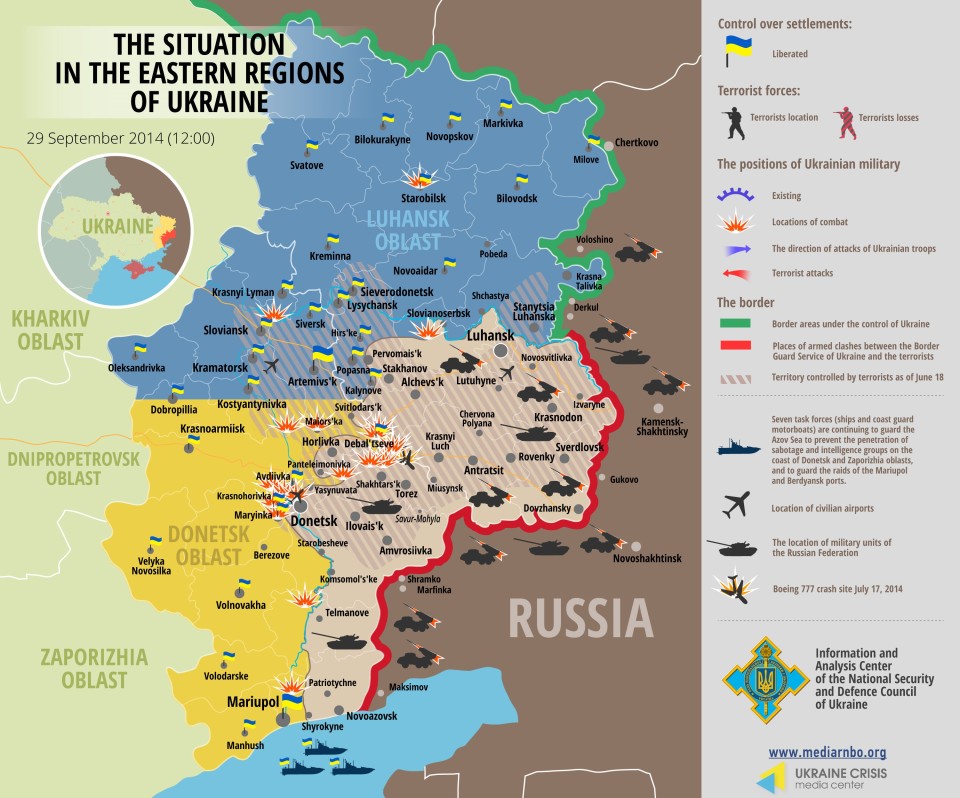 Colonel Lysenko underlined that despite heavy ongoing fighting, Donetsk airport was, remains and will always be Ukrainian.

In an extremely complicated situation our servicemen demonstrated true heroism. They fought back the enemy and destroyed the tank earlier hit by our APC. Within the last 24 hours 3 enemy’s tanks, 2 “Tyulpan” self-propelled mortars, one mortar unit and approximately 50 militants were destroyed.

Russian mercenaries also attacked twice ATO strongholds near Debaltseve and near Trudovske village in Marjinka district. All attacks were repelled.

Starting from 7 am today shelling of Ukrainian positions in the ATO zone stopped. Only shootout between the gangs is audible.

The State Border Guard Service is setting up and reinforcing the safety line along the area controlled by ATO forces. Interagency cooperation between law enforcement agencies and local authorities is set. New consignment of vehicles including those armoured was received, the units are getting ready for service in the winter time.

There was no engagement between border guards and terrorists.

Trilateral working group of the joint center on ceasefire control and coordination continues its work. Joint analytical groups were created at most critical directions. Thus, a group for missile corps and artillery and a group for anti-missile armament were established. 56 Ukrainian officers make part of the above groups, they are to arrive at monitoring spot marked with OSCE flag.

Commenting on the situation in population centers in the ATO zone, Colonel Lysenko reported that terrorists and Russian servicemen keep ruining Donbas infrastructure and shelling with artillery residential blocks on the territory they temporarily control. Resulting from artillery shelling building of the Kyiv district state administration in Donetsk was damaged, power generator substation of Novoazovsk wind power plant was destroyed in Bezymenne village of Novoazovsk district.

Due to the cold weather in Donetsk terrorists and Russian servicemen relocate from the “so-called “green area” to residential blocks and locals’ private apartments.

Yesterday near Stakhanov and Bryanka there was no connection for several hours. Russian electronic warfare unit was spotted in action, they covered redeployment of terrorists’ units in the region.

In Mariupol National Guard units continue engineer and fortification reinforcement of checkpoints, strongholds and city defense part. Civil organizations and workers of big industrial plants are constantly assisting the military in their efforts to reinforce the checkpoints. Ukrainian military are provided with engineering equipment for bolstering their positions, anti-tank “hedgehog” obstacles, diesel fuel and gasoline, metal slabs to reinforce fortifications, food and clothes for service under the stormy weather. Local plant supplied another vehicle for ATO HQ.

During the briefing the NSDC spokesman informed on the reaction of international community to the events in Ukraine.

Carl Bildt, Minister for Foreign Affairs of Sweden stated that the conflict in Ukraine is being frozen, there’s a constant threat on the part of Russia that it will use further force. According to him the West needs to pursue the path of restraining the conflict until an opportunity for its resolution in the long-term perspective arises.  Former NATO Secretary General Anders Fogh Rasmussen stated that the Western states won’t agree to accept attempts of the Russian Federation to redraw Ukraine’s borders. He underlined that Russian aggression against Ukraine follows Kremlin’s line as to the breach of international law that “started in Moldova, continues in Georgia, and is now in Ukraine”. “Unless Russia changes course, there can be no business as usual, and I expect that engagement with Moscow will remain a considerable challenge for the foreseeable future”, he said. Former NATO Secretary General also added that because of the Moscow’s political line the Alliance will maintain a continuous presence in Eastern Europe.