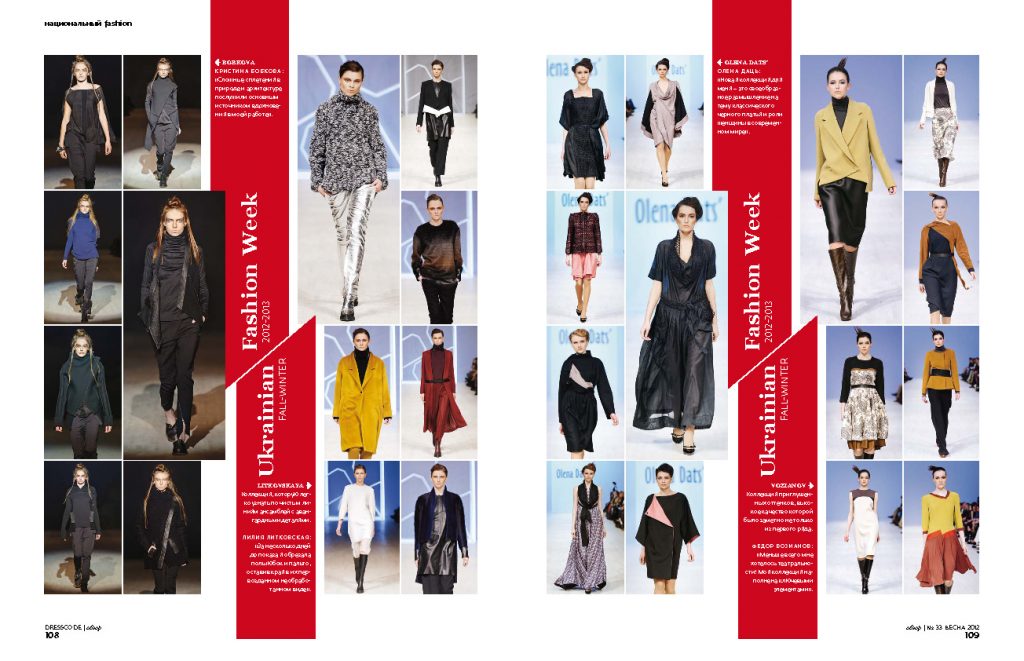 Since the end of November 2013, Ukrainian designers have been vocal about their stance on the latest events in Ukraine. They took active part in the public protests against the violence of government forces. They also volunteered at Euromaidan, helped the wounded in the hospitals, and worked at infocenters, making bullet-proof vests, and other necessary supplies.

During the 34th Ukrainian Fashion Week, designers once again demonstrated their active social position. “We couldn’t ignore the latest events which took place in Ukraine,” said the curator of the project Ukrainian designer Fedir Vozianov.

Each designer having lived through the events of the past four months has come up with his or her own creative way of expressing their emotions and attitudes in their collections. Some used colors, others – music, some – special accessories.

The event opened with a special exposition Ukraine Inspired. Designer Katja Bereznitsky presented her ARMS project where art bordered on fashion. “The demonic essence of the arms as a means of killing and destruction is extenuated with their amiable and protective function. Pacifists work to stop arms production, as it kills the innocent, yet history glorifies the role of arms in bringing peace and justice. Arms in general are an indispensable part of routine life,” said Bereznitsky.

To express his support of Ukraine Stefan Siegel, the owner of on-line boutique NOT JUST A LABEL, which features a hundred Ukrainian brands, agreed to hold a special seminar for Ukrainian designers. Another world-famous brand BOB BASSET presented a new collection called Mashrabiya (Shanasheel).

“It was our duty to show these collections to the world. We had to give a chance to Ukrainians to be proud of their talented compatriots,” reads the post release of the 34th UFW.

“Now it’s high time for a Ukrainian Renaissance, a time for creation, the time for constructive actions,” stated the event organizers.

The Ukrainian Fashion Week was established in 1997, becoming the first professional fashion event in Eastern Europe. Each year UFW presents prêt-à-porter collections from leading Ukrainian designers as well as from the fashion industry’s newcomers. The 34th Ukrainian Fashion Week presented 38 fashion shows and featured 46 designers, and was attended by about 15, 000 guests and more than 200 media outlets from all over Ukraine and abroad. Interestingly, the event was also live streamed and watched throughout the world, including by guests at the Ukrainian Institute of America on 5th Avenue in New York City.