Kyiv, October 9, 2014 –“Terrorists continue infringing the ceasefire. The biggest number of assaults is recorded nearby Donetsk airport, Debaltsevo and Schastya. The airport remains the main target of the terrorists who outshot it 5 times for the last 24 hours using mortar guns and light weapons. Positions of the Armed Forces of Ukraine nearby Tonenke populated locality were attacked twice using “Grad” rocket launchers. Within last 24 hours 1 Ukrainian military serviceman died and 4 servicemen were wounded as a result of bombardments”, – reported Colonel Lysenko, the National Security and Defense Council Information Center spokesman at his briefing at the Ukraine Crisis Media Center. 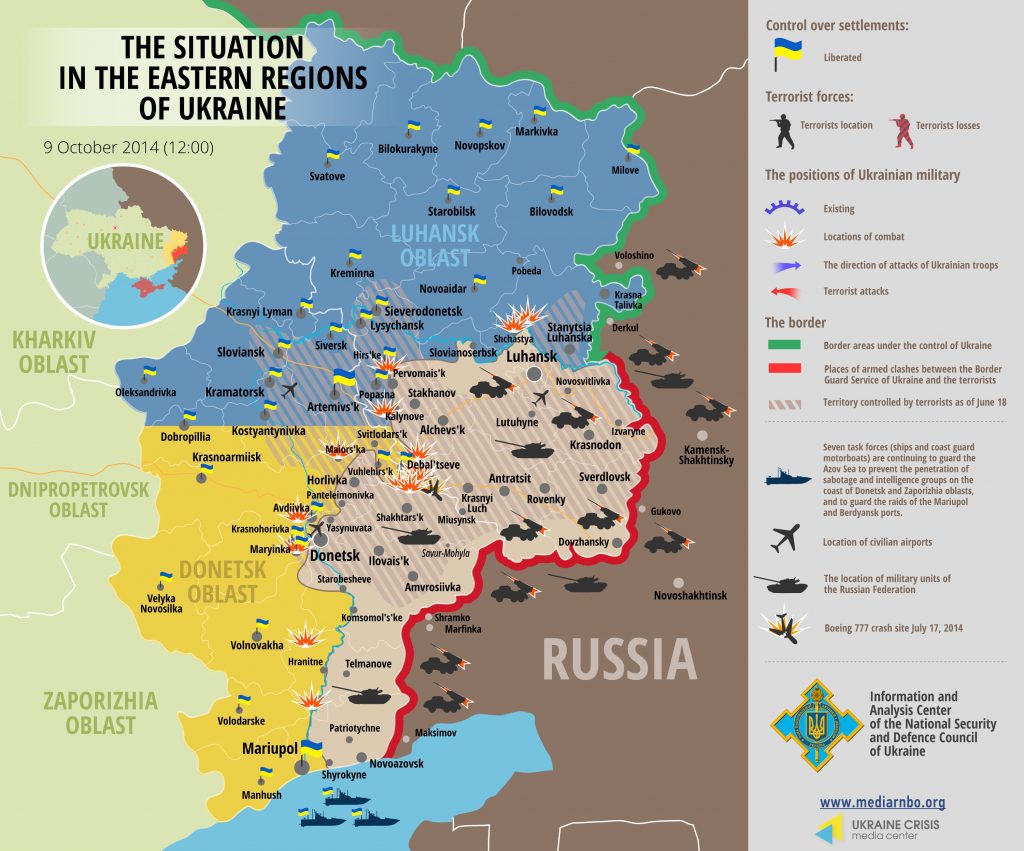 There were no military clashes recorded at the border beyond ATO area.

According to Lysenko, another fact of air reconnaissance conducted by a Russian pilotless aircraft in Mariupol direction was recorded yesterday. In connection with this we would like to inform that officers of militia garrison in Donetsk region developed a package of measures in order to neutralize potential threat nearby Mariupol. It includes cooperation with troops drawing duties at 1sr and 2nd defence lines. Works on equipping checkpoints of the 3rd defence line which would serve as support area and reinforcement for checkpoints of the 2nd line continue at present.

Colonel informed that terrorists subdivisions rotation was recorded in the area.  According to the information received, professional Russian servicemen are withdrawn from the front line to the border line with Russian Federation and replaced by terrorists from self-proclaimed Donetsk People’s Republic and Luhansk People’s Republic who had received training in field camps of  the General Staff of the Armed Forces’ Main Intelligence Directorate  of Russian Federation nearby Rostov-na-Donu. For instance, several military convoys consisting of approximately 10 vehicles each went out yesterday to the territory of Russia through border crossing checkpoint “Uspenka”.

We would like to emphasize that the reconnaissance recorded switching military equipment with Ukrainian marking which had been seized in occupied Crimea.  Apart from being an open theft of Ukrainian property, we should mention the possibility of provocations if the form of Donbas populated localities bombardments using presumably Ukrainian weapons.

Colonel Lysenko noted that that ATO zone extension is not planned, according to the Security Service of Ukraine official information.  Mass media messages on the extension are misinformation.

Terrorists continue outshooting residential quarters in Donetsk. Yesterday Kyivskyi and Kuybyshevskyi districts in Donetsk were being outshot from 5:00 pm till midnight. At present, regardless of being exposed to direct danger, repair teams are doing their best to renew gas supply to consumers in north part of Donetsk. They are also taking technologic measures to stabilize pressure in gas networks.

40 trucks with humanitarian aid from Germany out of 112 have already been unloaded. The unloading works continue. We would like to remind that this humanitarian freight contains modules for building of mobile towns for temporary stay of refugees.

Colonel Lysenko informed that terrorists taking out anything they can plunder from Ukraine to Russia – coal, metal junk, vehicles etc.  At present these facts were recorded by OSCE observation mission. In particular, the mission basing in Russian border crossing checkpoints “Hukovo” and “Donetsk” in Rostov region, recorded a fact of coal transportation by trucks from Luhansk region to the territory of the Russian Federation.

The Mission report published yesterday reads that freight convoys are transporting coal from Luhansk region to the Russian Federation while the border railway is out of function.

At his briefing the NSDC spokesman informed on response of international community to the events in Ukraine. The USA intend to enhance the ability of Ukraine to strengthen the security of its borders and preserve its territorial integrity and sovereignty under conditions of Russian occupation of Crimea and deliberate actions of separatists supported by Russia aimed at destabilization of the situation in Eastern Ukraine. The president Obama approved the decision on provision of additional aid in the defence and security sphere to the sum exceeding 46 million USD since August, in addition to the previously annunciated 70 million USD of security aid.

The Assistant Secretary of Defense for International Security Affairs Derek Chollet also specified that the USA are working out the program of lethal aid provision to Ukraine.

It will become the subject of NATO trust funds activity aimed at supporting Ukraine in four spheres: cyber security, logistics, command, control and communications system, wounded servicemen rehabilitation. Practical implementation of the abovementioned trust funds is to be initiated during the meeting of NATO Foreign Affairs ministers which will take place in December this year.

The Ministry of Foreign Affairs of Ukraine filed a note of protest to the Monostry of Foreign Affairs of Russia related to Russian opening of five ports for foreign vessels in the temporarily occupied territory of Crimea. The document lays emphasis on the fact that actions of the Russian party is another flagrant violation of the sovereignty of Ukraine as well as infringement of international legal commitments in compliance with provisions of the 1982 Law of the Sea Convention of the United Nations Organization, 1974 Convention of the Safety of Life at Sea and International Ship and Port Facility Security Code. The Ministry of Foreign Affairs demands that Russia should cease its abusive practices, in particular cancel the abovementioned decree of the Russian government, respect sovereignty and territorial integrity of Ukraine and stop military occupation of a part of the Ukrainian territory.

We would like to remind that Ukraine notified International Maritime Organization of the preparation of decision on Crimean ports closure as early as mid-May. Ukrainian sea ports in Evpatoriya, Feodosiya, Yalta, Kerch and Sevastopol are officially closed since July 15 of this year up till renewal of the constitutional order of Ukraine and termination of military occupation on the side of the Russian Federation.

Practically speaking, such decision means that any vessel entering sea ports of the peninsula does so at its own risk and peril as any ship owner or captain disregarding such prohibition may face serious troubles (penalties or even imprisonment).

The US Secretary of State John Kerry and the Secretary of State for Foreign and Commonwealth Affairs of Great Britain Philip Hammond stated that actions of Russian within recent month were challenging most basic principles of international system and called upon Russia to fulfil the commitments it took in respect of peace in Donbas. According to John Kerry, Washington and London “agree that Russia is to withdraw its troops from Ukraine immediately, stop providing terrorists with material support and fulfil its obligations within the framework of Minsk agreements”.

The USA Secretary of the Treasury Jacob Lew pointed at the possibility to increase sanctions against the Russian Federation in case the armistice in the East of Ukraine was being infringed.

Deputy Minister of Foreign Affairs of Poland Rafal Trzaskowski stated that Poland would not agree to possible mitigation of EU sanctions against Russia taking into consideration present developments in Ukraine. “Russia does not demonstrate any interest in practical de-escalation of the situation in Eastern Ukraine”, – he stated.

Spokesman for OSCE Special Monitoring Mission Michael Bociurkiw informed that the OSCE monitoring mission in Ukraine was prolonged by six months.  “Our mandate lasted six months. At present our mission has been prolonged by another six months basing on decision of all 57 mission member countries”,  – he stated. According to OSCE special mission spokesman, the mission presence is planned in the territory of 10 towns, 90 observers are working now and sonn their number will increase to 300 people”.