Kyiv, October 13, 2014 – “Terrorists’ activity in the ATO zone is localized in approximately 5 points where assaults and provocations are taking place regularly. In particular, these are Donetsk airport, outskirts of Debaltseve town as well as Yasynuvata district where terrorists’ activity revitalization has been recorded. Yesterday militants made three unsuccessful attempts to assail Donetsk airport which remains under our troops’ control. According to intelligence data received, due to considerable losses incurred by militants, they encounter difficulties replenishing their subdivisions with manpower as more and more people are refusing to take risks”, – reported Colonel Lysenko, the National Defense and Security Information Center spokesman at his briefing at the Ukraine Crisis Media Center. 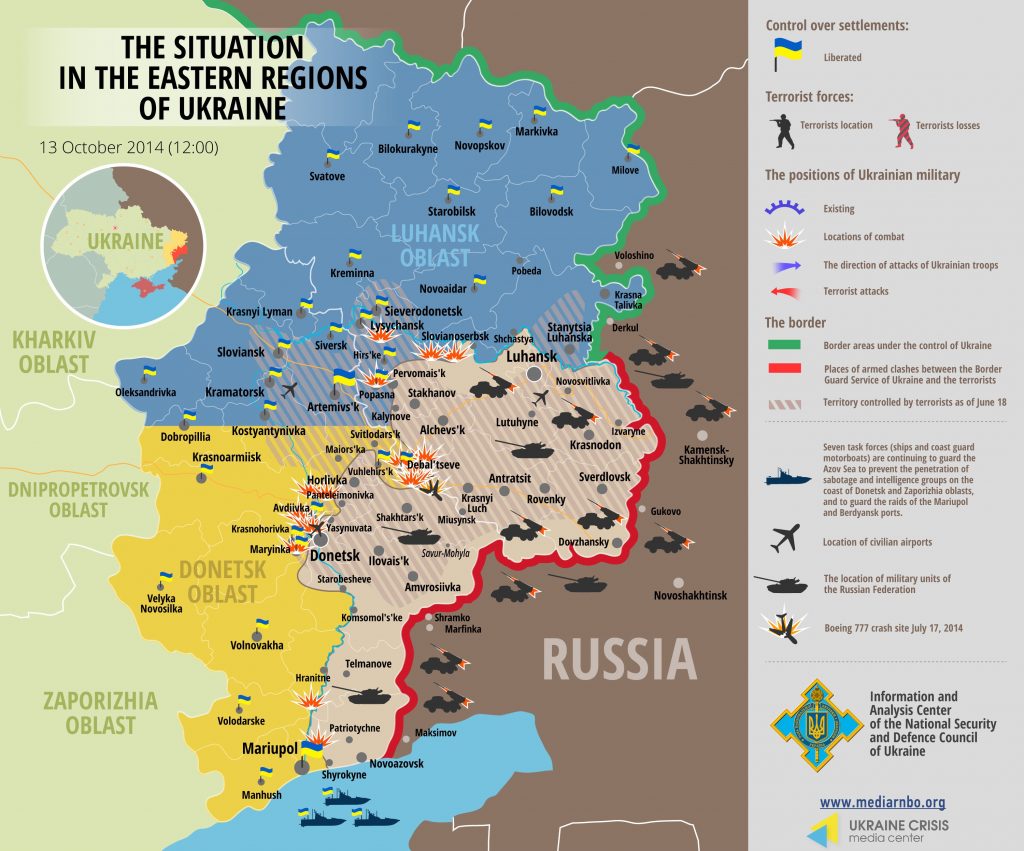 According to Lysenko, one Ukrainian serviceman died within last 24 hours as a result of bombardments.

Andriy Lysenko informed that terrorists and Russian troops continue active air reconnaissance of positions of ATO forces and border guards. 4 pilotless aircrafts were spotted and attacked by fire in Mariupol direction, 2 nearby Donetsk and 3 on the administrative border with the territory of temporarily occupied Crimea. The situation being what it is, Ukrainian troops continue taking measures to improve their defence capability and prepare to winter.

In particular, as of October 13, servicemen of the National Guard of Ukraine have been supplied with winter clothes in full. Proper preparation to drawing duties in winter time is one of the primary tasks set by the command for October. The soldiers are going to receive warming facilities: portable furnaces, cold-proof tents and modular frame constructions with heating and ventilation.

Inspection visit from the Ministry of Defence continues in the ATO area monitoring winterization of units and subdivisions and taking measures on shortcomings elimination.

According to NSDC spokesman, yesterday the President of Ukraine Petro Poroshenko made a statement on the Peace Plan implementation and national defence capability improvement.

In particular, the President emphasized that owing to implementation of the Peace Plan provisions and ceasefire mode setting we succeeded in bringing a Russian troops’ offensive to a halt, minimize losses among our servicemen, release more than 1500 Ukrainian citizens who had been kept hostage as well as introduce a package of measures aimed at restoring our troops’ combat capability.

Subdivisions rotation will take place, the troops received new and rebuilt equipment.  Plants providing the army with armor are operating on a three-shift basis now.

Moreover, owing to the ceasefire we managed to build the whole system of fortifications and equip standpoints in the territory of ATO zone with the aim to localize terrorist threat and prevent its possible spread to other regions.

Final settlement of silence mode which is still being infringed by terrorists, withdrawal of heavy armament from the limiting boundary, settlement of 30 km safety area and establishing efficient control over Ukrainian-Russian border are the primary tasks for the nearest future.

The President drew special attention to human resources strengthening both in military and civil authorities. New heads of regional state administrations in Luhansk and Donetsk regions have been appointed and system of intelligence agencies coordination has been improved. In compliance with the most urgent tasks, new heads of the Ministry of Defence and State Border Service will be appointed in the nearest future. In particular, the President is expected to suggest a nominee for a Minister of Degence position as early as today.

The head of the state emphasized that the work on peace process introduction will proceed despite any challenge or resistance. Renewal of usual life in the liberated territories will happen in the nearest future. Ukraine will be consecutively working in order to re-establish the sovereignty over the whole territory of Donbas and temporarily occupied Crimea.

Special emphasis should be laid on the fact that during the whole time of the ceasefire the Armed Forces, border guard detachments, the National Guard and the Ministry of Internal Affairs continues receiving new domestically produces weapons and non-lethal equipment from abroad.

Commenting on the situation in populated localities of the ATO zone, Colonel Lysenko said that terrorists continued outshooting residential quarters of towns in the territories temporarily controlled by them. For instance, yesterday terrorists outshot Debaltseve town using heavy artillery. As a result of the bombardment a local inhabitant died and one female resident of the town was wounded.

Number of armed clashes between “Luhansk People’s Republic” militants and cossacks of “Great Don Army of the Russian Federation” (chieftain—M. Kozitsyn) for the right to control certain populated localities for further plundering is increasing. Militants continue placing pressure upon entrepreneurs. Besides, Russian Cossacks are interested in gaining control over “coal-bearing” districts of the region in order to secure unhindered transportation of raw materials to the Russian Federation. We repeatedly reported the facts of illegal transportation of coal to Russia. Facts of the plundering were recorded by the OSCE mission as well.

According to Lysenko, situation in Mariupol town is calm and controllable. Military detachments of the National Guard of Ukraine continue securing access control arrangements in checkpoints surrounding Mariupol. It should be pointed out that there were no bombardments of ATO forces positions nearby Mariupol within the last fortnight. However, permanent observation is conducted with the aim of timely detection of the enemy’s preparation to possible attacks, bombardments of checkpoints, defensive lines of support points and defensive area.  Engineering and protective works on strengthening all types of fortifications around the town continue.