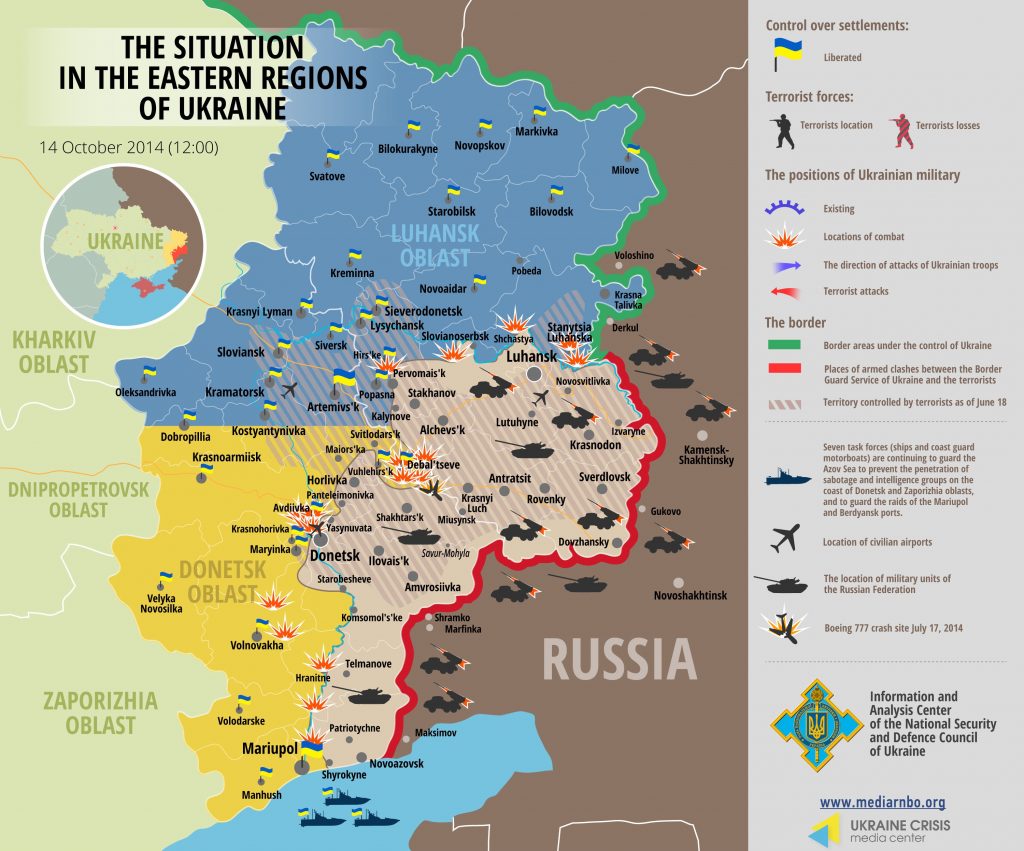 Andriy Lysenko informed that over past 24 hours there was no full-scale engagement between ATO forces and terrorists. Militants are most active near Donetsk airport, Shchastya and Debaltseve. In separate regions terrorists keep violating ceasefire regime and shelling our positions. In particular ATO positions in population centers of Pisky, Komuna, Tonenke, Olkhovatka in Donetsk region and Chornukhyne in Luhansk region got shelled with Grad MRLS. Yesterday our servicemen successfully repelled attacks on the airport and attacks on positions near Smeele Luhansk region.

Lysenko reported death of 7 Ukrainian servicemen in the ATO zone over the past 24 hours. It is worth mentioning that 6 our servicemen got exploded on mines and trip wires installed by the terrorists while conducting counter-terrorist actions.

In this regard NSDC is calling on locals on liberated territories and districts under terrorists’ control to be cautious. For the time being mines and hidden explosive devices installed by terrorists as well as shootouts between various militants’ gangs constitute the biggest threat to people.

Locals are encouraged to call at 101 hotline in case they discover trip wires, suspicious items etc.

Colonel Lysenko stated that amassing of manpower and machinery of illegal armed formations continued at Southern direction. In particular yesterday large special unit for military reconnaissance of the Russian Federation arrived near Novoazovsk. Military of the above unit do not hide the fact they are part of the Armed Forces of the Russian Federation. The tendency for active aerial reconnaissance remains. 6 UAVs spotted within the last 24 hours near Mariupol.  In Mariupol the situation is calm, public transport and municipal services work in regular mode.

No engagements occurred on parts of border controlled by Ukrainian servicemen.

Colenel reported release of 18 Ukrainian servicemen from captivity over the past 24 hours. 6 officers and 11 servicemen of the National Guard were held captive by the enemy over a month in Donetsk and Snizhne.

Within the last 24 hours Ukroboronprom repaired 5 infantry combat vehicles and airborne fighting vehicles BMP-1 and BMP-2 as well as an APC BTR-70.

The NSDC spokesman informed that yesterday first 10 vehicles of humanitarian cargo from Germany provided to Ukraine according to accords between the German Chancellor Angela Merkel and President of Ukraine Petro Poroshenko arrived in Kharkiv. This humanitarian aid includes household appliances, medical equipment, medicine, clothes and other essentials. The cargo is currently located in warehouses close to the future transit mobile settlement that is being constructed for internally displaced from Eastern Ukraine. 15 more vehicles with humanitarian aid are expected to arrive in Kharkiv.

Colonel Lysenko commented on response of the international community to the events in Ukraine. In his statement President of Finland Sauli Niinistö said Finland supports EU sanctions against Russia and condemns annexation of Crimea. He called on Russia to respect the ceasefire regime and to approach in constructive manner talks on the future of the Eastern Ukraine.

Head of the German governmental press and information agency Steffen Seibert said there are no grounds to have sanction against the Russian Federation cancelled or softened despite claims of Moscow on withdrawal of regular army units from the Ukrainian-Russian border. The German civil servant called the end of exercises an important but insufficient step on the way to have the Ukraine crisis settled.

French Ministry for Foreign Affairs claimed it is currently not possible to supply the first of the two Mistral class amphibious assault ships to Russia due to the situation in Ukraine.