Kyiv, 21 October 2014 – Ukrainian military have not been using munitions prohibited by international agreements. “Within the whole time of the anti-terrorist operation (ATO) in the East of Ukraine Ukrainian military were not using prohibited weapons including cluster munitions. We would like to address the representatives of the international organization to produce a more detailed report quoting respective facts and proofs. If we are talking about use of cluster munitions on peaceful residential blocks of Donetsk I have to say that Ukrainian military are not using weaponry on peaceful residential blocks in the cities. It is prohibited by the President of Ukraine, the Commander-in-Chief,” informed Colonel Andriy Lysenko, spokesman of the Information Analytical Center of the National Security and Defense Council of Ukraine (NSDC) at a briefing in the Ukraine Crisis Media Center disproving the accusations by the Human Rights Watch. 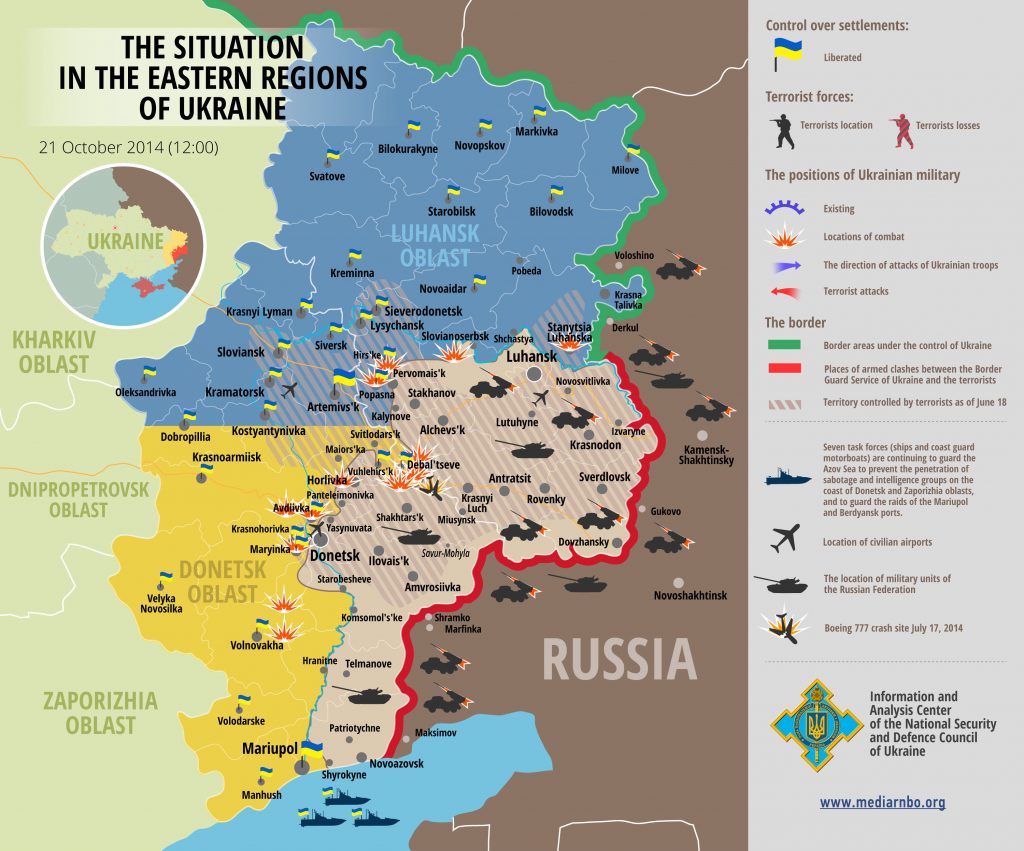 According to Colonel Lysenko the militants are constantly creating provocations and are spreading untruthful information. “May be this information got to the international organizations. If there are proofs on the use of prohibited weapons please do provide them. We are waiting for the proofs as well as for the experts’ assessment of the munitions in question,” added the NSDC spokesman.

Militants’ activity concentrated near Donetsk and Debaltseve as well as in Popasnyansky district of the Luhansk region. Within the last 24 hours there are no Ukrainian military killed in action, 4 servicemen got injured.

Andriy Lysenko explained the reasons of yesterday’s blast that occurred on the territory of the Donetsk chemical plant seized by terrorists: “After the militants seized the plant that had its storages full of large number of high explosives, terrorists attempted to set up own production of explosives. As per the field data and according to the estimation of experts on explosives the blast on the plant occurred most likely due to incompliance with the production technology by militants.”

Resulting from yesterday’s session of the EU Council on Foreign Affairs as to the implementation of the Peace Plan conclusions have been published on the Ukraine situation, assistance by the OSCE Special Monitoring Mission and further EU aid to Ukraine. As per the conclusions the European Union puts responsibility on the implementation of the Minsk accords on Russia. EU calls on Russia to withdraw illegal armed formations, military machinery, militants and mercenaries as well as provide safety at the Ukraine-Russia border for constant OSCE monitoring. The EU Council supports swift amplification and extension of OSCE Special Monitoring Mission mandate to the border crossing points with Russia to provide effective and full control at the Ukrainian border. Brussels does not accept holding of the so-called elections in the so-called “Luhansk-“ and “Donetsk People’s Republics.”

The conclusions also state that the European Commission and the European Union member states will provide EUR 63 million of aid to the population affected by the conflict in Donbas.

EU Council condemns worsening of the situation re human rights on the Crimean peninsula persecution and intimidation of the Crimean Tatar community in particular.

After the meeting of the Heads of Foreign Affairs Ministries of EU member states Catherine Ashton, EU High Representative for Foreign Affairs and Security Policy stated that the EU has no intention so far to soften the sanctions against Russia.

Head of the Polish Ministry for Foreign Affairs Grzegorz Schetyna also underlined that softening of the sanctions is not being considered. According to Schetyna sanctions need to be “consistently kept” unless Russia demonstrates the change of its position towards Ukrainian conflict. “All participants of the meeting were unanimous as to this issue,” he remarked.

On 24 October UN Security Council plans to hold a session on the Ukraine situation. UN Security Council meeting has been called by the Great Britain. It is expected that in the course of the meeting latest report of the Office of the High Commissioner for Human Rights published on 8 October will be discussed.