Kyiv, 22 October 2014 – “Yesterday President of Ukraine Petro Poroshenko spoke over telephone with the President of the Russian Federation Vladimir Putin. In the course of the conversation the need to ensure regime of complete ceasefire and of artillery silence was underlined. After the silence regime was announced intensity of shelling decreased by several times. However in some districts of anti-terrorist operation (ATO) zone terrorists kept violating ceasefire regime. Their highest activity was spotted near Avdiivka, Donetsk airport and Debaltseve. Ukrainian military repelled two attacks on the Donetsk airport. Terrorists suffered big losses. Our positions on the spot were shelled four times. Over the past 24 hours no Ukrainian serviceman was killed, 5 servicemen got wounded,” – reported Colonel Lysenko, spokesman of the Information Analytical Center of the National Security and Defense Council of Ukraine, at a briefing at the Ukraine Crisis Media Center. 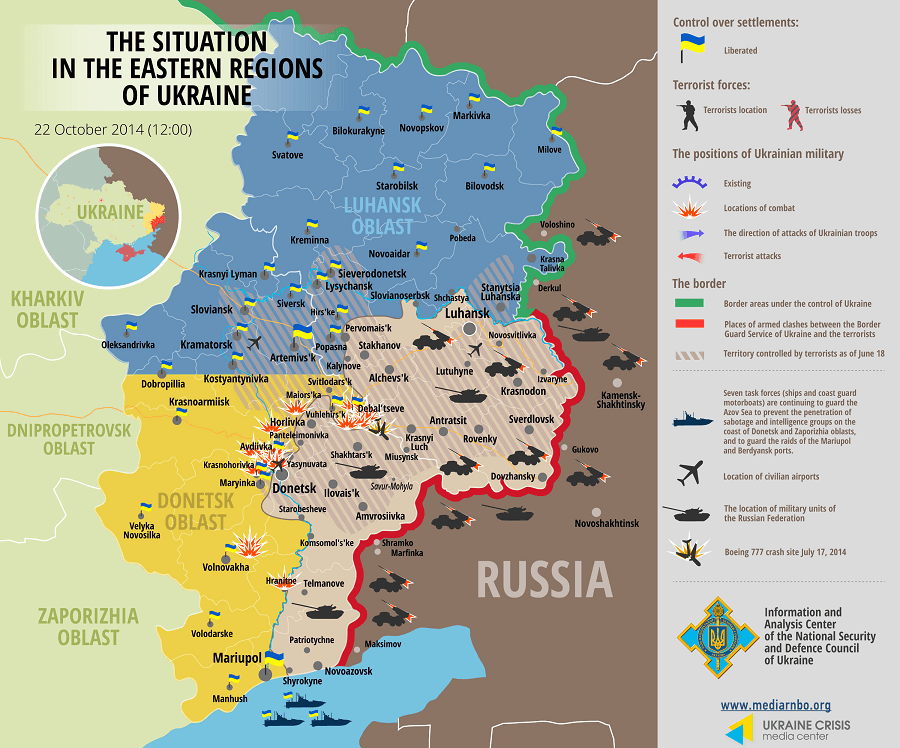 President of Ukraine Petro Poroshenko signed the decree to award 172 military and servicemen of internal affairs agencies for courage and heroism demonstrated in combat in the ATO zone.

According to Colonel Lysenko outside of ATO zone there were no engagements at the border. One case of aerial reconnaissance with UAVs occurred at the border with occupied Crimea.

At the same time according to intelligence data manpower, armament and ammunition continue being supplied from Russia through parts of the border controlled by terrorists.

US Senator (Democratic Party) Carl Levin, Chairman of the Senate Committee on Armed Services and US Senator James Inhofe (Republican Party) stated that the US have to provide defense assistance to Ukraine including weapons.

Yesterday during his working visit to Dnipropetrovsk region the President of Ukraine Petro Poroshenko visited the State Pivdenne M.K.Yanhelia enterprise. Based on the visit conclusions the Head of the State instructed to include products of the State enterprise “Production Association O.M. Makarov Southern Machine-Building Plant” in the state defense order for 2015.

In particular it was ordered to start financing production of high-precision weapons, cruising missiles, complex that will be providing tactical weapons. To remind there was no state order in place for high-precision weapons from 2009. “We need to be sure that our army, Armed Forces and their equipment corresponds to the best international standards,” noted the President of Ukraine.

The Head of the State particularly stressed on the need to provide voting opportunity at parliamentary elections for ATO servicemen. Despite the Parliament did not introduce respective changes to the legislation according to the President’s instruction 10 thousand servicemen were included in voters’ registry based on their dislocation places. They will be able to implement their constitutional voting right.

In the framework of Ukraine President’s Peace Plan implementation the State Border Guard Service acts to set up the safety zone along the combat line in the Donetsk and Luhansk regions as well as applies security measures in the districts controlled by ATO units.