Kyiv, October 30, 2014 – The terrorists keep attacking the positions of Ukrainian military servicemen. Terrorist activity has shown the largest increase in the south of Donetsk region. “The situation in the east of Ukraine is characterized by the increased activity of reconnaissance and sabotage units of the enemy and intensification of more numerous attacks. The positions of ATO servicemen on the northwestern perimeter of the outskirts of Donetsk and at the Donetsk airport were shelled with “Grad” multiple rocket launchers, artillery, tanks and mortars. “The airport is under the control of our men, “said at a press briefing at the Ukrainian crisis media center the spokesman of  Information-Analytical Center of the National Security Council, Colonel Andrei Lysenko. 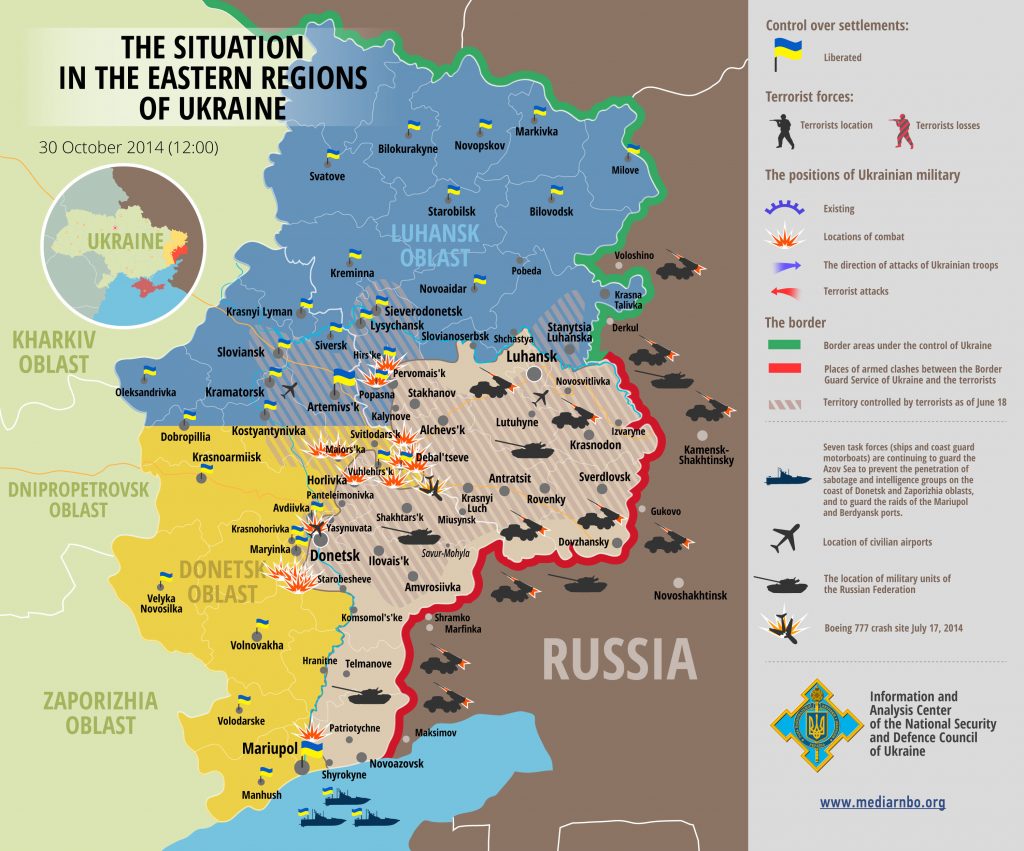 Now terrorist activity is concentrated in the area of Crymske-Sokilnyky towns of the Novoaydarsky district. On the outskirts of the same locality terrorists hфave twice shelled Ukrainian platoon key point with mortars. Outpost near Crymske town was shelled with mine-throwers for 7 times. “Near the village Petrivske of Volnovasky district a covering unit supporting a moving column of ATO forces has found a diversionary terrorist group and engaged the enemy. Some terrorists were destroyed instantly, the rest retreated. During the battle 3 our soldiers were killed, one was injured. In total overnight 7 Ukrainian soldiers were killed and 11 were injured, “said a spokesman of the National Security and Defense Council.
New waves of confrontations arise among the terrorists. Yesterday there was a skirmish with small arms and mine-throwers between troops of armed opposition groups in areas of Kominternovo and Vodiane in the Donetsk region. According to current information, the leader of the so-called DPR ordered to redeploy all terrorist units from Donetsk to Shakhtarsk, except  “Oplot” group. “This caused a new wave of confrontations between terrorists of ‘“Oplot”’ and other departments. In order to “restore order” among terrorists a subversive Fedaral Security Service of Russia special unit “Vympel”, consisting of 100 persons, has arrived on the territory of ATO in order to conduct punitive operations among terrorists “, – said Andrey Lysenko.
Terrorists are going to distribute resources of another so-called “humanitarian convoy” from Russia among the locals during the self-proclaimed “elections”, which are to take place on November, 2. According to current information, the head of the “DPR” terrorist organization  Alexander Zakharchenko pledged to shoot bandits for stealing and resale of humanitarian aid. “Moreover, Zakharchenko said that the residents of Donbass should not rely heavily on humanitarian assistance, as it is not going to suffice for everyone. In addition, he suggested that local residents should “earn their meal by themselves.” In fact, Zakharchenko admitted facts we have reported earlier: the lion’s share of humanitarian aid does not manage to reach the civilians in the occupied territories. It is obtained by terrorists for their own consumption or for sale through shops “- said a spokesman of the National Security and Defence Council.
UN Secretary General Ban Ki-moon has condemned plans of armed groups in the east of Ukraine to conduct their own “elections” on November, 2. Holding such elections violates the Constitution of Ukraine and its laws.
A spokesman of EU High Representative for Common Foreign and Security Policy, Catherine Ashton said that the EU regrets the statements of Russian Foreign Minister Sergei Lavrov about Moscow’s recognition of so-called local elections in Lugansk and Donetsk “People’s Republics”, which violate the Minsk agreements.
The United States have supported the position of France on the suspension of the decision on the transfer of “Mistral” to Russia. French Finance Minister Michel Sapin said that the conditions are currently unaccetable for the transfer of helicopter carrier “Mistral” to Russia.
US Ambassador to Ukraine Geoffrey R. Pyatt said the United States will supply Ukraine with military high technologies to help troops fighting in the East to protect themselves. “For example, antimine-thrower radiolocation radar systems that we will supply in the coming months along with respective staff training”, he said.
US State Department spokesman Jen Psaki expressed concern over the decision of the Russian Court to keep Nadiya Savchenko under the detention in custody for several months more. However, she stressed that the allegations of the Russian court of Savchenko having illegally crossed the border of Russia “are outrageous and contrary to logic.” At the same time, she said, we know that “Savchenko was kidnapped in eastern Ukraine by terrorists and secretly transported to Russia against her will.” Psaki said the decision of Russian court to keep Ukrainian pilot under the detention in custody until the 13-th of February is a violation of Russia’s obligations under the Minsk Agreement. “We call on Russia to release her immediately,” said a spokesman of the US State Department.