Kyiv, November 01, 2014 – Militants keep violating ceasefire agreements. Their activity is mostly localized in several districts. Russia-backed terrorists were attacking Ukrainian troops’ positions with mortar fire, grenade guns, AA mounts and light weapons 6 times on the territory of Donetsk airport and Ukrainian army disposition in Pisky settlement. “Militants are outshooting our positions nearby Debaltseve, Orlovka-Ivanivka and Maloorlivka in Shakhtarskyi district. Relocation of terrorists’ equipment and manpower is recorded in the area of Shakhtarsk and Torez. Certain revitalization of militants’ activity has been recorded in the south of Donetsk and Luhansk regions. The only case of “Grad” rocket launchers delivery to outshoot ATO forces positions has been recorded nearby Chornukhine settlement in Popasna district. 6 Ukrainian servicemen died and 10 were wounded over past 24 hours”, – informed a deputy head of the Information Center of the National Security and Defence Council Volodymyr Polevyi during his media briefing at the Ukrainian Crisis Media Center. 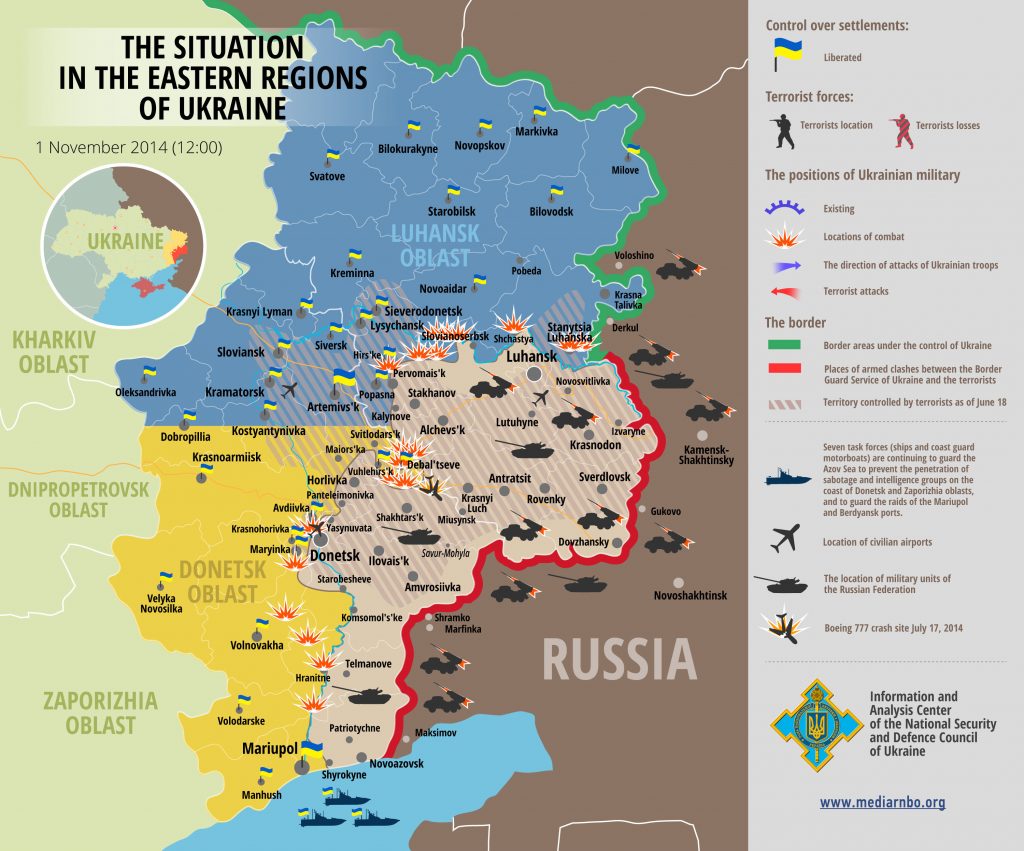 Command of the Armed Forces of the Russian Federation continues providing militants and Russian subdivisions acting on the territory of Ukraine with logistic support. The highest activity is being observed in Rostov-Donetsk direction where regular movements of motor convoys are recorded. According to Volodymyr Polevyi, militants are doing their best to block the process of efficient monitoring of the state border between Ukraine and Russia. “Armed Forces of the Russian Federation continue conducting air reconnaissance in the border area. Yesterday a MI-8 helicopter flight along the state border line from the side of the Russian Federation without infringement of Ukrainian aerial domain was recorded opposite several border segments in Chernihiv region”, – added the NSDC representative.

The United States of America is not going to recognize any outcomes declared as a result of these so-called elections, stated the USA ambassador to Ukraine Geoffrey Pyatt.  “We are calling upon all the members of the world community to do the same”. If the Russian Federation recognizes the militants’ pseudo-elections in Donbas planned to be held on the 2nd of November, sanctions against it are going to be intensified.

The President of Parliamentary Assembly of the Council of Europe Anne Brasseur criticized the decision of self-proclaimed government of “Donetsk People’s Republic” and “Luhansk People’s Republic” to hold so called elections on the 2nd of November. The President of PACE called upon Russian authorities to fulfil their commitments in compliance with Minsk agreements and refrain from recognition of DPR and LPR elections results which may undermine peaceful process of stability in the region.

On October 31 the Russian Federation blocked statement to the press of Head of the UN Security Council condemning illegal “elections” in Donbas planned for the 2nd of November.  The draft document acknowledges sovereignty, independence and territorial integrity of Ukraine and contains appeal to all the signatories to comply with Minsk agreements to the full extent.