Kyiv, November 2, 2014. “Elections” held by the terrorist organizations, the so-called LPR (Luhansk People’s Republic) and DPR (Donetsk People’s Republic) in Donbas contradict Minsk arrangements and will not be recognized by the international community, noted the spokesperson for the Information and Analytical Center of the National Security and Defense Council of Ukraine Colonel Andriy Lysenko during his press briefing at Ukraine Crisis Media Center. 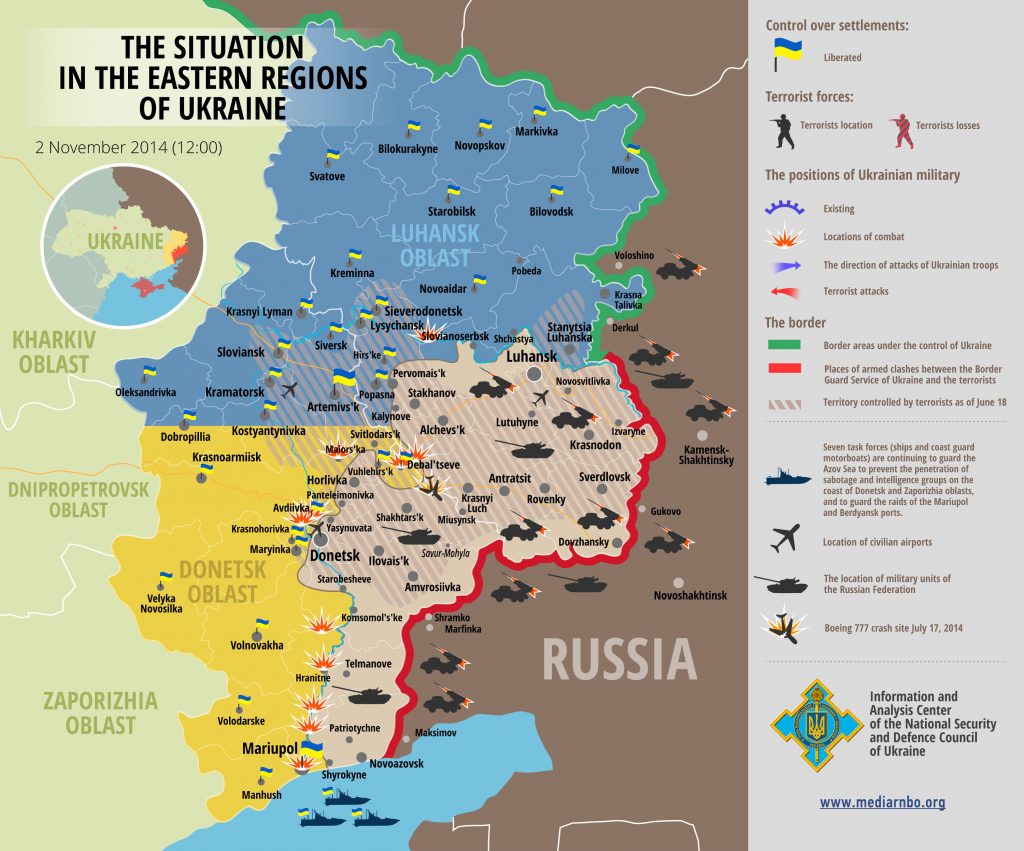 Colonel Lysenko has also informed of a terrorist act, which took place at 7:30 am today at a checkpoint near Mariupil. It resulted in two Ukrainian soldiers killed and one injured. Preliminary data suggests that this was the remote detonation of the radio-controlled explosive device.

Terrorists continue to violate the ceasefire regime by attacking and shelling the positions of ATO forces. Within the last 24 hours the terrorists focused their activity in the south of the Donetsk region, particularly around the city of Donetsk, as well as in the areas of Novoaydarsky and Popasniansky districts of Luhansk region.

The Security Service of Ukraine (SBU) has opened criminal proceedings on the issue of the so-called “elections” held by the terrorist organizations “Donetsk People’s Republic” and “Luhansk People’s Republic.” The grounds are the violations according to Article 9 part 1 of the Criminal Code of Ukraine.

Andriy Lysenko said that yesterday 25 Ukrainian soldiers, who were kept hostage by the terrorists for about two months, had been released. Seventeen of them were the servicemen of the National Guard of Ukraine battalion from Kherson; they have already been delivered to Kharkiv to receive comprehensive care. No armed clashes were reported to take place beyond the ATO zone. Three Ukrainian servicemen died and seven got injured in the last 24 hours.

On November 2, 32 vehicles of the so-called “humanitarian convoy” passed through the checkpoint “Donetsk” (Russian Federation) and entered the territory of Ukraine. Ukrainian interdepartmental group did not take part in the processing of the cargo. Notably, at the Russian checkpoint “Perekop”, which is located on the administrative border with the temporarily occupied Crimea, some unidentified persons wearing civilian clothes carry out a survey among the drivers on the location of military forces and equipment of the Ukrainian Armed Forces and Border Service.

Andriy Lysenko announced that the Ministry of Defense has decided to include the representatives of volunteer organizations into the structural units of Ukrainian MOD and General Staff. They will provide food and clothing supplies for Ukrainian army, purchase fuel and lubricants, as well as work in the awards department.

German Foreign Minister Frank-Walter Steinmeier said that Russia should demonstrate recognition of the unity and respect for the territorial integrity of Ukraine through real actions. “Elections” unequivocally contradict Minsk ceasefire arrangements, and that’s why we do not recognize them, said Steinmeier.

Special OSCE monitoring mission denied Russian media reports on the participation in the monitoring of the so-called “elections” on November 2 in Donbas. This is another example of the cynical lies the Russian media, noted Lysenko. To observe the “elections” came several right-wing politicians from Italy and Austria, which represent an organization, called “Association for Security and Cooperation in Europe” – ASCE.