Kyiv, November 06, 2014 – Increase in quantity of Russian troops is observed on the occupied territories in the east of Ukraine and on the border with the Russian Federation. “According to intelligence data, about 60 units of armor were shifted from towards Rostov-na-Donu to the areas bordering with Ukraine over past 24 hours. A troop train arrived to Kamensk-Shakhtynskyi railway station carrying 50 T-64 tanks and 10 unmarked armoured command vehicles.  Convoy serials proceeding through Molodohvardiysk town in Luhansk region have also been observed.  Command of the Armed Forces of the Russian Federation placed separate units of military transport aviation in the Moscow area in operational readiness. It provides a possibility of immediate delivery of additional units and military equipment to the border with Ukraine using ІЛ-76 aircrafts”, – informed a spokesman for the Information and Analysis Center of the National Security and Defence Council Andriy Lysenko during his media briefing in Ukrainian Crisis Media Center. 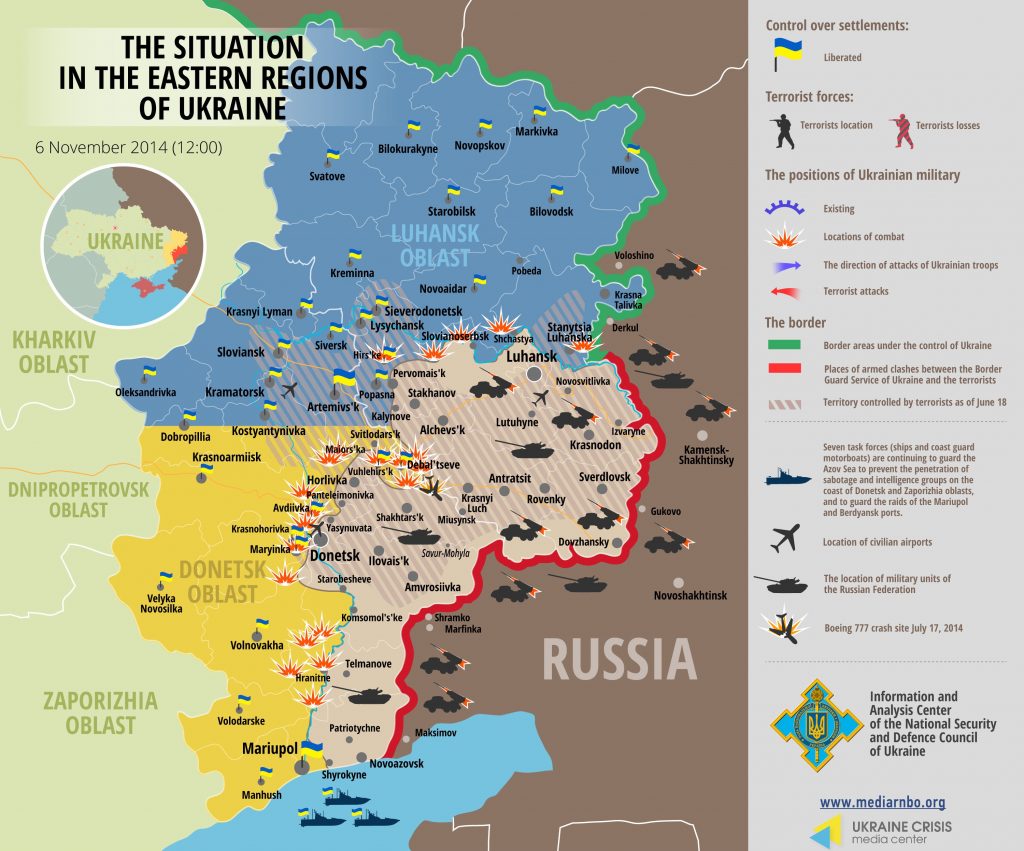 Russian troops continue conducting air reconnaissance on the border as well as in the controlled areas along the line of combat clashes. 6 pilotless aircrafts and one helicopter were spotted over past 24 hours. The pilotless aircrafts were deployed over Mariupol and in the vicinity. The helicopter has been spotted on the border with the occupied Crimea. “Intensity of shelling over ATO forces dispositions did not decrease. The enemy demonstrates the highest activity in Donetsk direction. Militants outshoot positions nearby Pisky, Maryinka, Avdiyivka, Taramchuk, Novokalynove, Orlivka and Mayorsk populated localities using mine throwers, grenade launchers and other light weapons”, – added colonel Lysenko.

There were no fallen among Ukrainian military servicemen over past 24 hours, 9 servicemen were wounded.

Militants delivered another mortar attack on the airport in Donetsk and continued outshooting residential quarters.  Two teenagers died and 4 were wounded as a result of an artillery shell explosion in sports ground of a general education school No.63 launched from the militants-controlled territory.  “According to the intelligence data received, the shell came from Makiyivka direction where terrorist groups are located. The Security Service of Ukraine has already opened criminal proceedings on the fact of this”, – explained the NSDC spokesman.

President of the European Commission Jean-Claude Juncker stated that sanctions against Russia would remain as they are now and would depend on development of the situation in Ukraine.

The USA Secretary of the State John Kerry stated that if “Minsk agreements” are fulfilled in their entirety, sanctions against Russia might be mitigated, but if it did not happen and infringement of the agreements continued, “the pressure would only increase”. John Kerry also added that the USA were appealing to Russia and its puppets in Eastern Europe to terminate combat actions nearby Mariupol and Donetsk airport, fulfill the ceasefire conditions and start working on Ukrainian re-establishment of control over its border.

The Minister of External Affairs of Canada John Bird stated that the authorities of the country are deeply concerned about the information of Russian troops presumably moving towards Ukrainian border. Head of Canadian Department of External Affairs called upon the Russian Federation “to withdraw troops from border areas straight away”. He pointed out that Canada would continue monitoring the situation development and continue working with its partners and allies to decrease pressure over the Russian Federation aiming at termination of its aggressive activity.