Kyiv, November 8, 2014. The recent trends persist in the occupied territories of the Donbas region: the terrorists violate the ceasefire, while Russia increases its military presence in the territories controlled by the rebels. Moreover, concentration of military equipment and manpower is taking place in the cities of Shchastia, Pervomaysk, Popasna and Slavyanoserbsk of the Luhansk region. This was stated by the Deputy Head of the Information and Analytical Center of the National Security and Defense Council of Ukraine Volodymyr Polevyi during a press briefing at the Ukrainian Crisis Media Center. 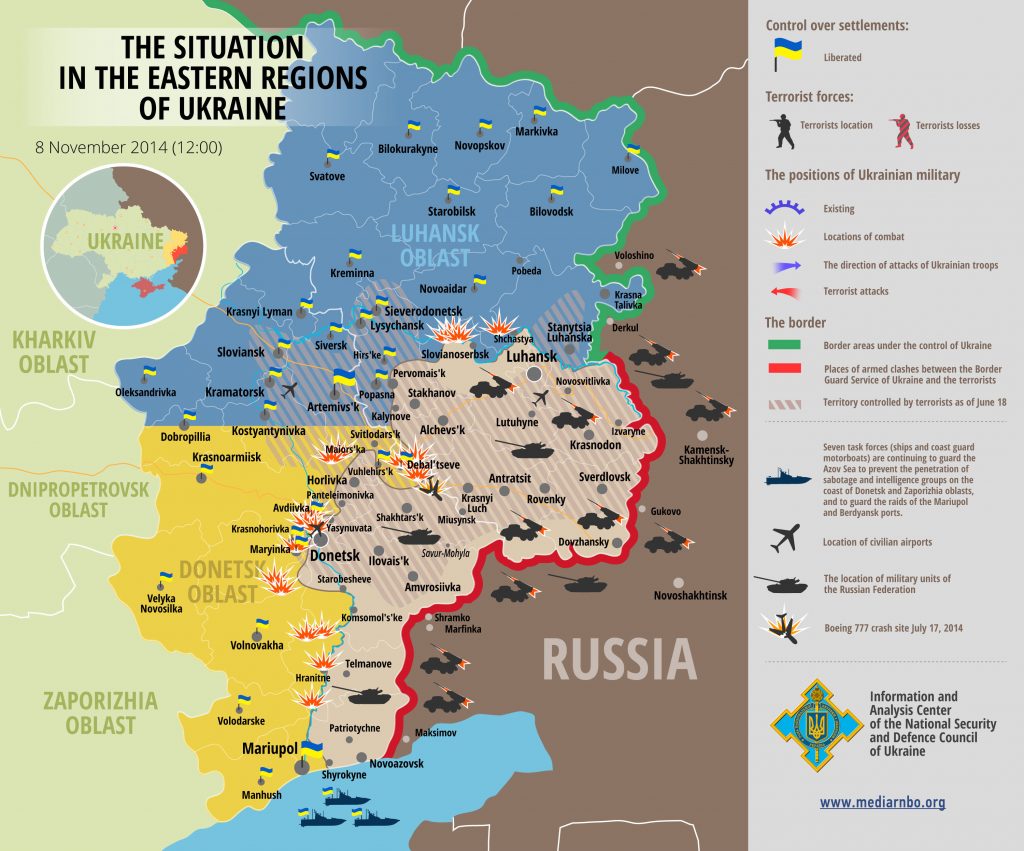 In the last 24 hours the militants launched their most active attacks in the direction of Donetsk, in particular, the Donetsk airport was shelled twice with grenade launchers, small and sniper arms. The terrorists used mortars, tanks and artillery to fire at Ukrainian forces’ positions in the settlements of Maryinka, Berezove, Novomykhaylivka, Pisky, Avdiyivka, Mayorske, Leninske, and Dzerzhynske. At the same time, in the Debaltseve direction, the terrorists fired artillery, mortars, grenade launchers and small arms at the Anti-Terrorist Operation (ATO) forces’ position near the settlements of Nikishyne, Ridkodub, and Debaltseve. Near Chernukhine village, Ukrainian forces were fired at from rocket launchers “Grad”.

In Mariupol direction, the rebels used artillery, mortars and grenade launchers to shoot at Ukrainian military positions near the settlements of Starohnativka, Novolaspa, Granitne, and Zamozhne. In the area between Pervomaysk and Luhansk, near Tryokhzybenka and Kryakovka towns, militants shot at ATO forces’ positions from rocket launchers “Grad”. Mortar and small arms were fired at ATO position’s near the settlements of Staryi Aydar, Krymske, and Donetske. Artillery fire of Ukrainian forces destroyed a detachment of occupants near Krymske.

Yesterday nine Ukrainians, who were kept hostage in the Luhansk region, were freed, including seven soldiers and two volunteers. One of the liberated military men is a representative of the “Aydar” battalion, the other six are soldiers of the 80th and 24th Brigades of the Ministry of Defense of Ukraine.

Regarding the situation in the settlements in the ATO area, Volodymyr Polevyi reported that the militants carried out forced emergency mobilization among the populations of Khartsyzk, Snizhne, Shakhtarsk, Zugres, Mospine, Ilovaysk and Amvrosiivka.

Moreover, the so-called “humanitarian convoy” from Russia which illegally entered the territory of Ukraine, imported simulators for training militants, as well as a variety of equipment to launch training fields for the militants directly on the Ukrainian territory.