Kyiv, 13 November 2014 – The situation in Donetsk and Luhansk regions is consistently aggravating.  Ukrainian military observe constant movement of Russian military equipment with terrorist marks to the delimitation line. Russian military units (including anti-aircraft systems for long-range targets, aviation brigades) are being concentrated along the Ukrainian-Russian border. “Biggest military activity was spotted at the Luhansk direction. Here terrorists shelled with Grad and mortars at two strongholds near Stanytsia Luhanska. Our positions near population centers Vilkhove, Shastya and Kryakivka got shelled with Grad six times. Strongholds near Stary Aydar and Artem were fired at with mortars and small arms. Our military repelled an attack at a stronghold of anti-terrorist operation (ATO) forces near Sokilnyky, the enemy suffered losses in manpower. Within the last 24 hours 4 Ukrainian servicemen got killed, 19 injured,” informed Colonel Andriy Lysenko, spokesman of the Information Analytical Center of the National Security and Defense Council of Ukraine (NSDC) at a briefing in the Ukraine Crisis Media Center. 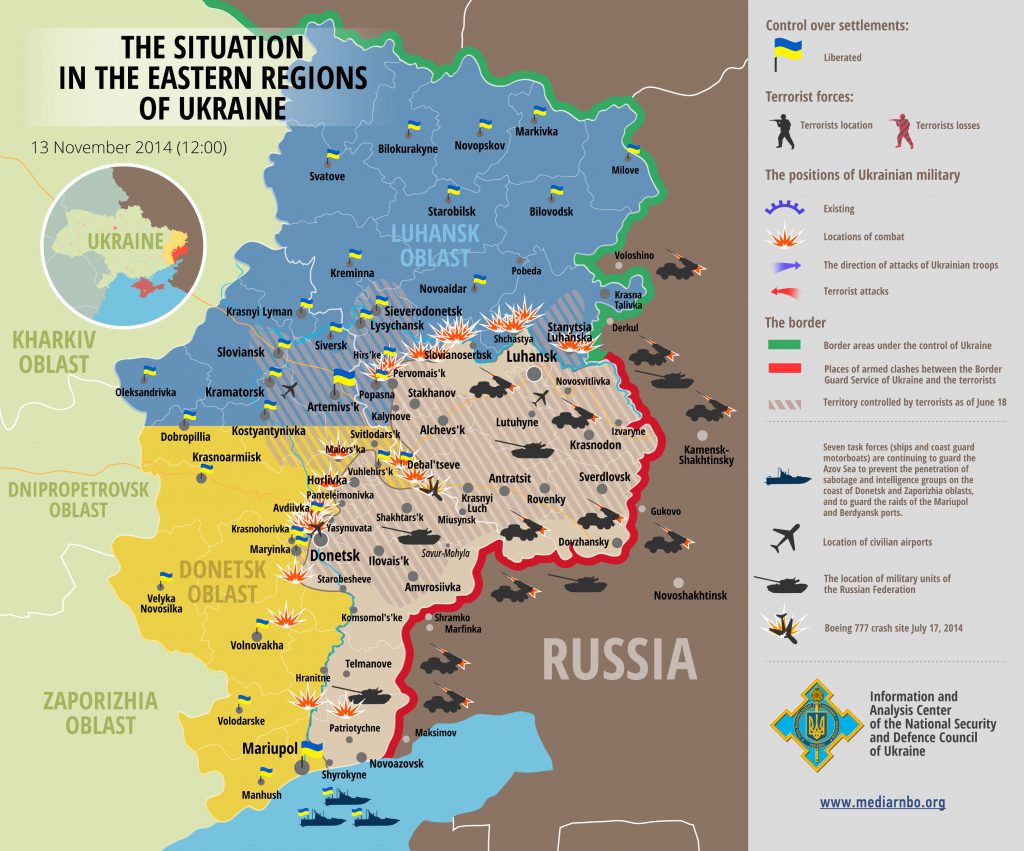 At Pervomaysk direction militants shelled two National Guard checkpoints near Krymske village and a checkpoint of Ukrainian Armed Forces near Frunze village with Grad MRLS and mortars. Positions near Zolote population center were shelled with mortars. “Russian occupants are firing both at the military positions and at the population centers,” added NSDC spokesman.

Residential blocks in temporary occupied population centers of Donetsk and Luhansk regions and in Donetsk itself are increasingly shelled. “Hranitne village in Telmanovsky district was shelled with mortars yesterday. Yesterday in Luhansk region the city of Shastya was continuously shelled, terrorists shelled with mortars Krymske village of Novoaydar district, Zolote population center and Troitskoho village near Zolote. As a result of mines and shells blasts 57-year old and 18-year old inhabitants of Zolote were injured with shrapnel. Both are in hospital,” noted NSDC spokesman.

Yesterday in Donetsk and Luhansk local pensioners went out on massive protests blaming the leaders of the so-called “Donetsk-“ and “Luhansk people’s republic” responsible for considerable worsening of the social and living conditions, absence of pensions promised numerous times by the so-called “new authorities”. “All social payments for the citizens of Ukraine – population on the territories temporary occupied by the terrorists from now on will be paid on the territories controlled by Ukrainian authorities. All due payments will be disbursed for them, and are ready to be received according to the procedure by addressing the social security state agencies on the liberated territories in Donbas or at their registration place in other regions of Ukraine,” explained Colonel Lysenko.

On 12 November an extraordinary session of the UN Security Council was held, the situation in Ukraine was discussed. Assistant Secretary-General for UN Political Affairs Jens Toyberg-Frandzen claimed that the international organization is concerned with the possible restoration of active military actions in Ukraine.

In his turn Permanent Representative of Ukraine to the United Nations Yuriy Sergeyev said that open war in the East of Ukraine has not started only “due to Ukraine’s restraint.”

Permanent Representative of Lithuania to the United Nations Raimonda Murmokaitė at the UN Security Council session stated that Russia is waging “undeclared war” in Ukraine. She commented on the intentions of the Russian Defense Ministry to increase the number of fighter jets in the framework of patrolling all over the world. According to Murmokaitė it comes as a testimony to the aggressive politics of the Russian Federation extending beyond Ukraine.

United States Ambassador to the United Nations Samantha Power underlined that Russia “only talks of peace, but keeps fuelling war.”

Government of Switzerland reinforced sanctions against Russia in regard to the situation in Ukraine. Switzerland introduced a row of restrictive measures on placement of long-term securities of Russia’s five national banks that got sanctioned by EU. To have the long-term financial instruments issued in the country permission will be required. Such a decision was adopted by the country’s government to avoid the situation when Switzerland could be used to evade the sanctions introduced by the European Union against Russia due to the situation in Ukraine.

Nato Secretary General Jens Stoltenberg urged Russia to pull back its forces and military equipment out of Ukraine and fully comply with the Minsk accords. As per the Alliance’s estimate build-up of military capacities in the East of Ukraine reported over the last several days “includes Russian tanks, artillery, air defense system of Russia and Russian combat troops,” he said. “It’s a serious threat to the ceasefire,” stressed Mr. Stoltenberg. “Any attempt by separatist forces to seize more territory in eastern Ukraine would be another blatant violation of the Minsk agreement.”

OSCE keeps spotting movement of heavy military and artillery convoys entering the territory of the buffer zones defined by the Minsk accords.

OSCE monitoring mission reported that within the last week at Russian border crossing points “Gukovo” and “Donetsk” they spotted considerable number of groups in camouflage crossing the border as well as the so-called “Cargo 200” and coal taken to the Russian Federation from parts of Donbas seized by terrorists.

OSCE Secretary General Lamberto Zannier informed that Crimean “authorities” closed down the OSCE office and do not allow the return of the monitors causing a problem for Crimean Tatars.

EU Commissioner for European Neighbourhood Policy and Enlargement Negotiations Johannes Hahn stated that the recent actions of the Russian Federation in the East of Ukraine resulted in EU’s current position that will not see the sanctions against Russia decreased.