Kyiv, 15 November 2014 – Situation in the anti-terrorist operation (ATO) zone remains tense. Intensity of shelling, subversive raids and attacks of Russian mercenaries is growing. Russia continues to redeploy its Armed Forces to the Ukrainian-Russian border and supply weapons, ammunition, other technical means and supplies to the terrorists. “Last night most complicated situation was observed at Debaltseve foothold. Our positions got shelled there the biggest number of times. Near Orlovo-Ivanivka village of Shakhtarsk district terrorists fired twice from mortars at the ATO platoon stronghold and attacked the convoy from an ambush. The military suffered losses, however engaged in combat and repelled the enemy’s attack. Terrorists fired at the positions of ATO forces near the city of Debaltseve and outside Sanzhyrivka of Artemivsky district with Grad, mortars and small arms. The fire never stopped near Nikishyne population center of Shakhtarsk district and outside of the cities of Yenakieve and Dzerzhynsk,” informed Volodymyr Polevy, Deputy Head of the InformationAnalyticalCenter of the National Security and Defense Council of Ukraine (NSDC) at a briefing in the UkraineCrisisMediaCenter. 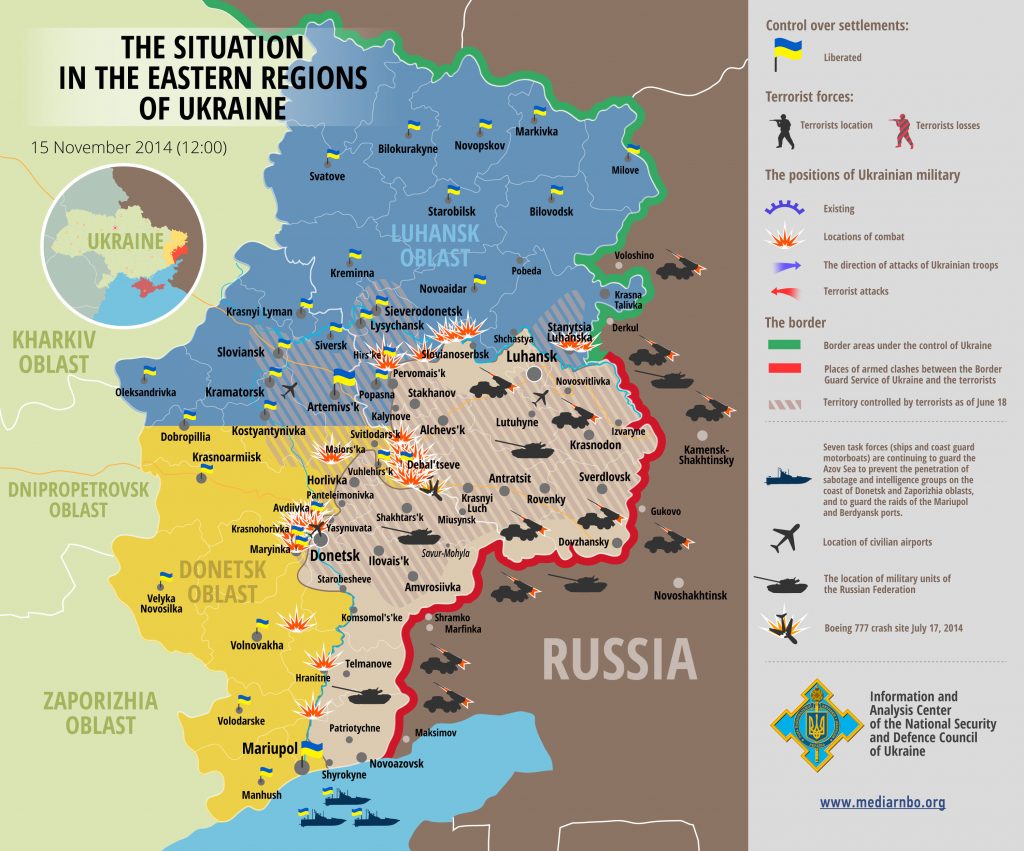 Within the last 24 hours in the Donetsk airport area militants opened mortar fire twice at the positions of Ukrainian military. The attack was repelled. The units defending the airport were supplied with additional armament to effectively eliminate the terrorists.

At the Mariupol direction near Sartana Russians used UAVs three times. Terrorists shelled with mortars at the strongholds of ATO forces near villages Hranitne, Pavlopil and Novohryhorivka.

In the last 24 hours 7 military were killed in action, 10 got wounded in action.

The number of victims of yesterday’s shelling by terrorists of Tryokhizbenka of Novoaydarsky district increased. “In the morning militants shelled Tryokhizbenka from Vesela Hora village with mortars and Grad systems. One of the shells exploded on the street where a 38-year old woman and her 9-year old daughter were walking. 86-year old woman and a 58-year old man got killed as well. The people were just in the yards of their houses when artillery shells launched by the militants exploded nearby,” explained Volodymyr Polevy.

The EU will keep using all diplomatic instruments including sanctions to achieve political solution of the situation in Ukraine. Such statement was made by the President of the European Council Herman Van Rompuy during the G20 summit in Australia. “Russia must stop the inflow of weapons and troops from its territory into Ukraine, and Russia must withdraw those already present,” he added. According to the President of the European Council Foreign Ministries Heads will discuss further steps on Monday in response to the conflict escalation.

The President of Slovakia Andrej Kiska stated that the official Bratislava intends to support the EU decision on introducing further sanctions against Russia in case such measures will be supported by other EU member states.

Estonian Minister of Defense Sven Mikser thinks with the Ukraine crisis at the background NATO needs to use the “policy of strength” against Russia.

NATO Secretary General Jens Stoltenberg accused Russia of taking aggressive actions towards Ukraine and NATO. According to him Russia has violated international law in Ukraine and is conducting the policy that threatens safety in Europe. “Russia is responsible for aggressive actions, it has violated international law, it has not respected the sovereignty and territorial integrity of Ukraine and it has undermined the whole rule-based order we had in Europe for many years. As a result it is hard to continue cooperation policy no matter how strongly we would want it,” said Mr. Stoltenberg.