Kyiv, 18 November 2014 – Situation in the anti-terrorist operation (ATO) zone tends to become more complicated. Militants continue firing at ATO forces positions, Russian troops and terrorists’ gangs continue their redeployment along the delimitation line with the so-called “Donetsk” and “Luhansk people’s republic”. “Over the past day the general number of shelling times slightly decreased. There were no attacks on ATO forces positions as during attacks within the recent days terrorists suffered considerable losses in manpower. At the same time the number of cases when terrorists used Grad multiple rocket launcher systems has relatively increased. Yesterday ATO positions were shelled mostly at Debaltseve and Luhansk directions,” informed Colonel Andriy Lysenko, spokesman of the Information Center of the National Security and Defense Council of Ukraine (NSDC). 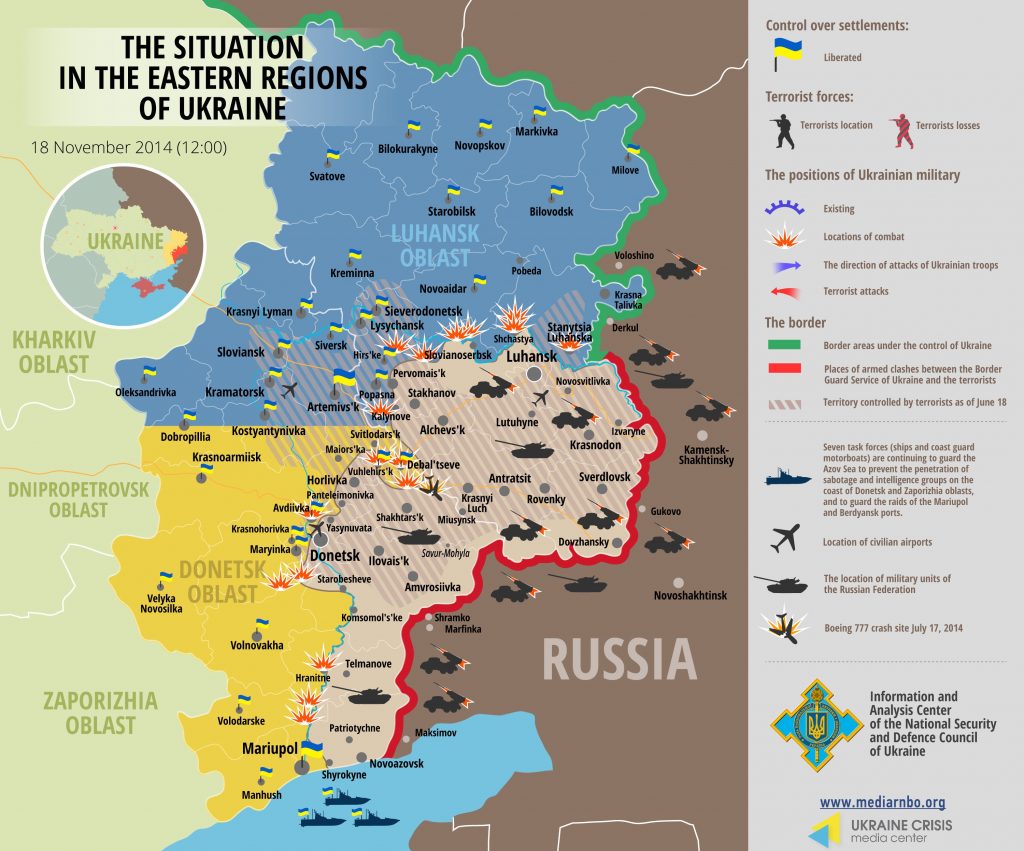 At Debaltseve direction the militants fired with mortars and small arms at a Ukrainian stronghold and with Grad MRLS at ATO forces positions in the Southern part of the city. Near Orlovo-Ivanivka of Shakhtarsky district Ukrainian servicemen were killed having tripped landmines and tripwires. We herewith would like to bring the attention of the local population to the subversive activities of terrorists who are planting mines at civilian objects and along the movement routes of civilians. We call on everyone to be attentive and do not touch suspicious items,” explained NSDC spokesman.

As per the reconnaissance information terrorists leaders ordered to throw several dozens of bodies of terrorists and Russian military recently eliminated near Debatseve into a tunnel of a private coal mine that was later blasted.

According to Lysenko, 6 Ukrainian servicemen were killed, 9 got wounded over past 24 hours. 17 persons were liberated from captivity yesterday.

On the territories controlled by militants humanitarian situation worsens. “Discontent of locals with the terrorists’ actions is growing, people were desperate and staged massive protests. Yesterday in Sverdlovsk of Luhansk region approximately 1000 locals protested against the activities of terrorists’ groups of the so-called “Luhansk people’s republic”. In Torez of Donetsk region women with children went out for a rally against terrorists’ activities. During the protest participants blocked the traffic on the central streets,” added Andriy Lysenko.

By the end of November the European Union intends to prepare a list of leaders of the so-called “Donetsk” and “Luhansk people’s republic” as well as have them added to the “black list” of the sanctioned individuals. In cooperation with international donors and financial institutions the EU intends to support Ukraine with all-round implementation of the key reforms to accelerate its economic and political association with the EU.

The UK Foreign Affairs Ministry made a statement on its increased support for the OSCE monitoring mission in Ukraine. The Foreign Secretary Philip Hammond has announced that the UK will send ten armoured vehicles with associated communications equipment worth £1.2m to support the OSCE Special Monitoring Mission in Eastern Ukraine. He also informed on the increase of number of the UK representatives in the OSCE SMM. Eight monitors have already arrived, three more will come in the end of the month. In the beginning of November OSCE announced its plans to increase the number of its monitors in Ukraine up to 500 by the end of the year.