Kyiv, 20 November 2014 – The situation in the anti-terrorist operation (ATO) zone remains tense. Terroristic gangs and units of the Russian Federation Armed Forces are on increased combat alert. “Within the last day the number of times ATO forces positions were shelled increased. There are no Ukrainian servicemen killed in action, six our troops got wounded. Russia blatantly transports military cargos from its territory to the Ukrainian territory controlled by militants both by road and by railway. OSCE mission observers at the Russian border crossing points (BCPs) “Gukove” and “Donetsk” reported that within a week from 12 to 19 November 500 persons in military uniforms crossed the Ukrainian border in both directions. Those persons crossed the border individually or in groups. The OSCE mission informed that the facts in question of crossing the border were conducted mostly at the “Donetsk” BCP,” informed Colonel Andriy Lysenko spokesman of the Information Analytical Center of the National Security and Defense Council (NSDC) at a briefing in the Ukraine Crisis Media Center. 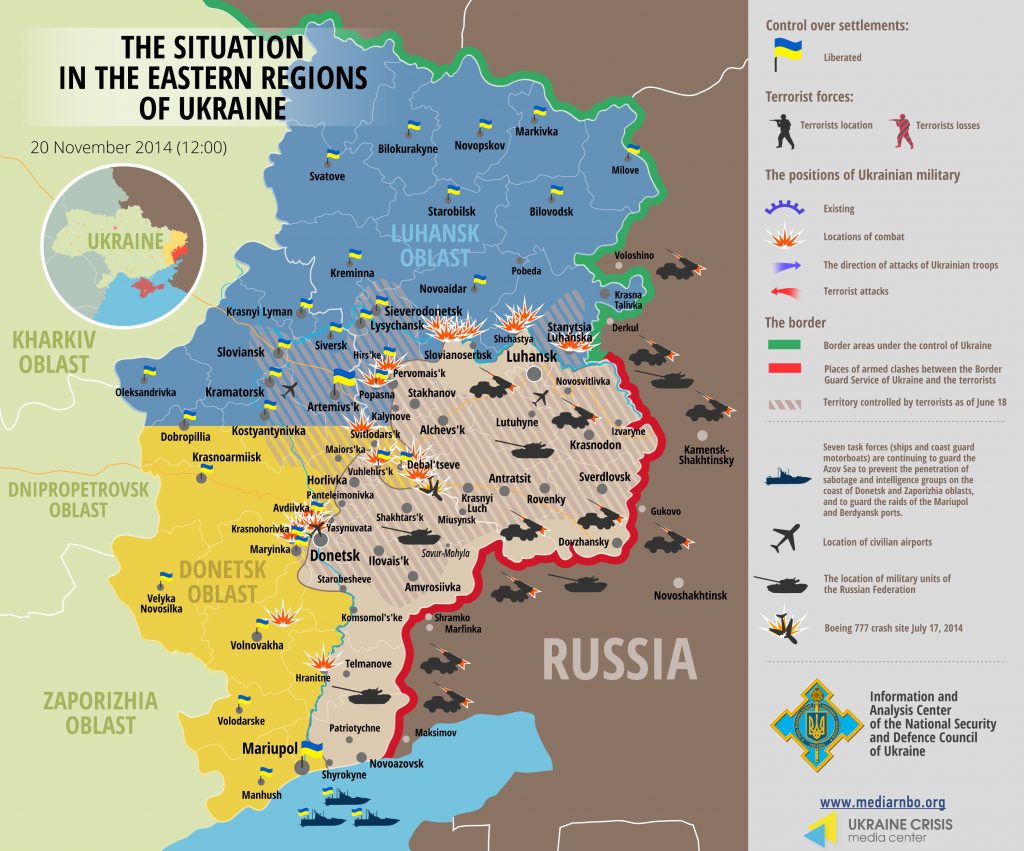 NSDC spokesman commented on the information regarding the fire opened at OSCE monitors: “We would like to draw particular attention to the episode when OSCE mission monitors came under fire near Marjinka. We have warned a number of times that terrorists are putting on their vehicles ATO tactical insignia to stage provocations. The case in question falls into the above description. As per the ATO command order Ukrainian military move only in convoys of minimum two vehicles. The mission report says that the fire was opened from a single vehicle. We would also like to draw attention to the fact that unfortunately the information on the incident was not passed to the Ukrainian military in operational manner, we learnt about it from the report. Had this data been immediately provided to the Ukrainian side extensive measures to detain the abusers would have been taken.”

Build-up of the Armed Forces of the Russian Federation continues on the territory of the occupied Crimea. Military units from various regions are being actively brought there. “A moment worth mentioning is that first in the last 20 years Russia starts conscription for young men from Chechnya who will be on service outside of the republic. The first group of conscripts will be sent to Crimea,” noted NSDC spokesman.

US Ambassador to Ukraine Geoffrey Pyatt said Russia violated the Minsk accords and has been supplying heavy military equipment to the militants. “Russia has not lived up to expectations with respect to complying with some of the most important provisions of the Minsk Protocol, Russia has done exactly the opposite by sending additional tanks and heavy equipment in Ukraine, further inflaming the situation and deepening the crisis,” he said. The US Ambassador to Ukraine underlined that Ukraine’s potential NATO membership is to be decided by the people of Ukraine only. The same position was voiced by the US National Security Council spokesperson Mark Stroh and by the Denmark’s Minister for Foreign Affairs Martin Lidegaard.

UK Minister for Europe David Lidington stated that the UK has got undeniable proofs of Russia’s support to the terrorists, build-up of Russian military presence at the border with Ukraine and supply of weapons to the terrorists in Donbas. “Kremlin sent hundreds of military to Ukraine, staged thousands at the border and provides the puppets in the east with weapons and tanks in unlimited quantity. It is not an assumption, but a matter of fact. We are in possession of the satellite images, pictures taken on spot, OSCE mission reports and testimonies of witnesses,” the Minister underlines.

Lithuanian President Dalia Grybauskaitė voiced the conviction that under the current situation in Donbas Ukraine is fighting for the whole civilized world and Lithuania is one of the countries ready to support it. “Today, Ukraine is fighting for peace in the whole of Europe, for all of us. If the terrorist state that is carrying out aggression against its neighbour is not stopped, that aggression might spread in Europe and beyond,” noted Grybauskaitė.