Kyiv, 22 October 2014 – In Donetsk and Lugansk regions the militants increased the intensity of fire attacks on ATO forces positions near Debaltseve, Donetsk, Lugansk, Mariupoland near Bahmutivska road. “Within the last 24 hours the shelling of Ukrainian territory from the Russian Federation was registered over again. Yesterday at 22.15 the units of the Ukrainian Armed Forces, located between Yuhanivka and Herasymivka in Stanychno-Luhansk regioncame through shelling from Russia. Once again we registered the deployment of columns of military equipment from Russia to Ukraine in the direction of Lugansk”, – informed a spokesman for the Information and Analysis Center of the National Security and Defence Council  colonel Andriy Lysenko during his media briefing in Ukrainian Crisis Media Center. 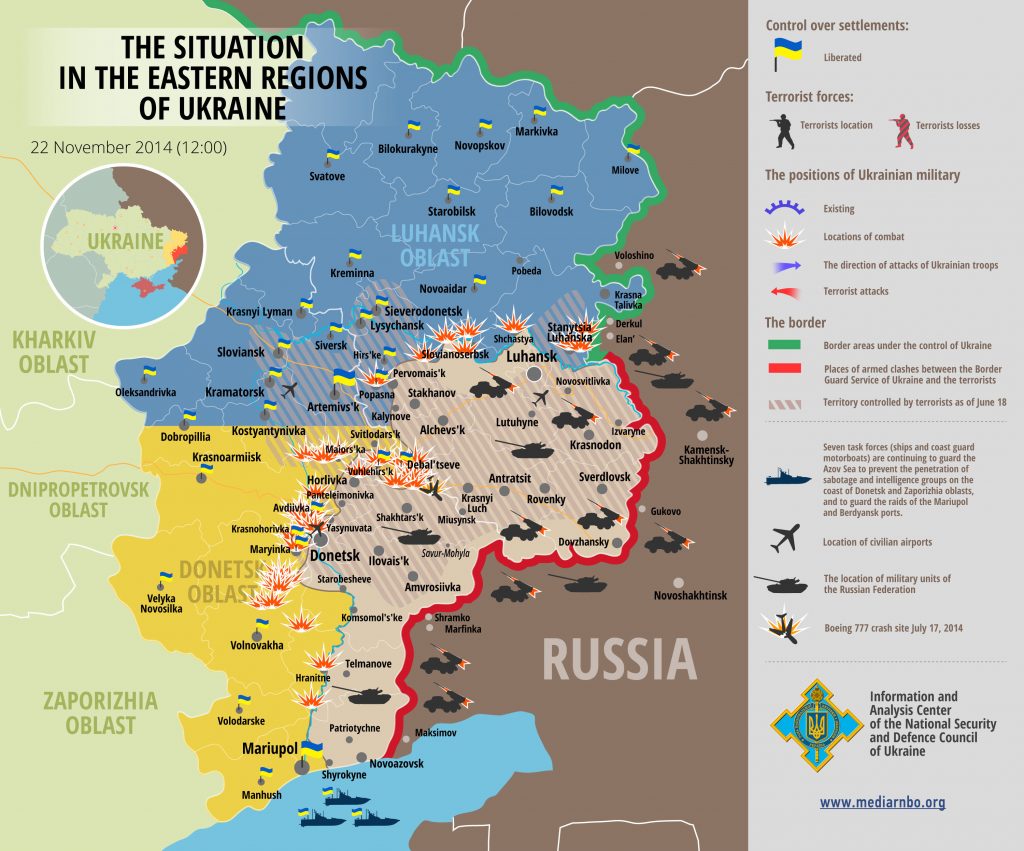 The shelling near Debaltseve was intensified significantly. Militants in the area ofDebaltseve and villages in the suburban area Holmivskyy near Gorlovka shelled Ukrainianpositions with rocket launchers “Grad”. In other cities, attacks on checkpoints and settlementswere carried out with mortars and grenade launchers. “Our military forces strike back with immense accuracy to destroy the terrorists` firing points. Later on the accuracy of our artillerywill only increase. The reason is that we have the first three light anti-artillery radar systemsdelivered from the United States to Ukraine, that will be adopted for the Ukrainian Army. This was announced on Friday by the Pentagon spokesman Colonel Steve Warren. Radar systems seethe approach of mortar fire and quickly calculate the position of the enemy mortar firing. This is the first batch of radar systems out of 20 units to be delivered in general over the next few weeks, “- explained Colonel Lysenko.

Throughout the day in the Donetsk area the militants shelled Ukrainian positions mainly in the Maryinsky and Yasinuvatska areas with mortars, tanks and small arms as well as carried out another attempt to assault Ukrainian military positions at the airport. In this area other citiescame through heavy fire with artillery, mortars and small arms. The terrorists`attempt to attackthe Donetsk airport was repulsed, the terrorists suffered heavy casualties.

In the Mariupol area the terrorists shelled Ukrainian military strongpoint near the villageOlhynka with “Grad” rocket launchers, in a number of villages they also engaged artillery, mortars and small arms. In the Lugansk area militants shelled ATO strongpoints with artillery and mortars. The terrorists` shellfire near Bahmutivska road continues. In this area terrorists shelled the town of Popasna with “Grad” rocket launchers. Within the last 24 hours 4 soldierswere killed, 10 – injured.

A flight of the plane of distant radar detection was recorded over Russian territory along the state boundary near Krasna Talivka in Luhansk region, and also a UAV flight in the direction Mariupol – Pavlivka near the settlement Sartana was recorded as well.

NATO Secretary General Jens Stoltenberg informed that the Alliance is watching the movements of troops and military equipment of the Russian Armed Forces in the direction of the armistice line established in eastern Ukraine. “We notice the movement of troops, tanks, artillery and air defense systems in Ukraine. We also observe the movement of armed columns towards the line of separation and the movement of forces in the eastern Ukraine to the west of the ATO zone. It should be taken very serious because such actions undermine the Minsk protocol and deepen the conflict” – said Stoltenberg.

A spokesman for the German government Zaybert Steffen said: “Russia operates inUkraine without the consent of the Ukrainian government and actively supports separatists there. Without military and financial support from Russia the separatism would not be represented in such an aggressive form.”