Kyiv, 24 November 2014 – Situation in the ATO-zone remains tense. “The shelling intensity won`t decrease. The terrorists try to recapture the territories under control of the Ukrainian Army and carry out attacks on the ATO forces positions in Donetsk, Debaltsevo, Lugansk, Mariupol directions and near Bahmutivska road. 3 soldiers were killed, 24 – injured over past 24 hours”, – informed a spokesman for the Information and Analysis Center of the National Security and Defence Council  colonel Andriy Lysenko during his media briefing in Ukrainian Crisis Media Center. 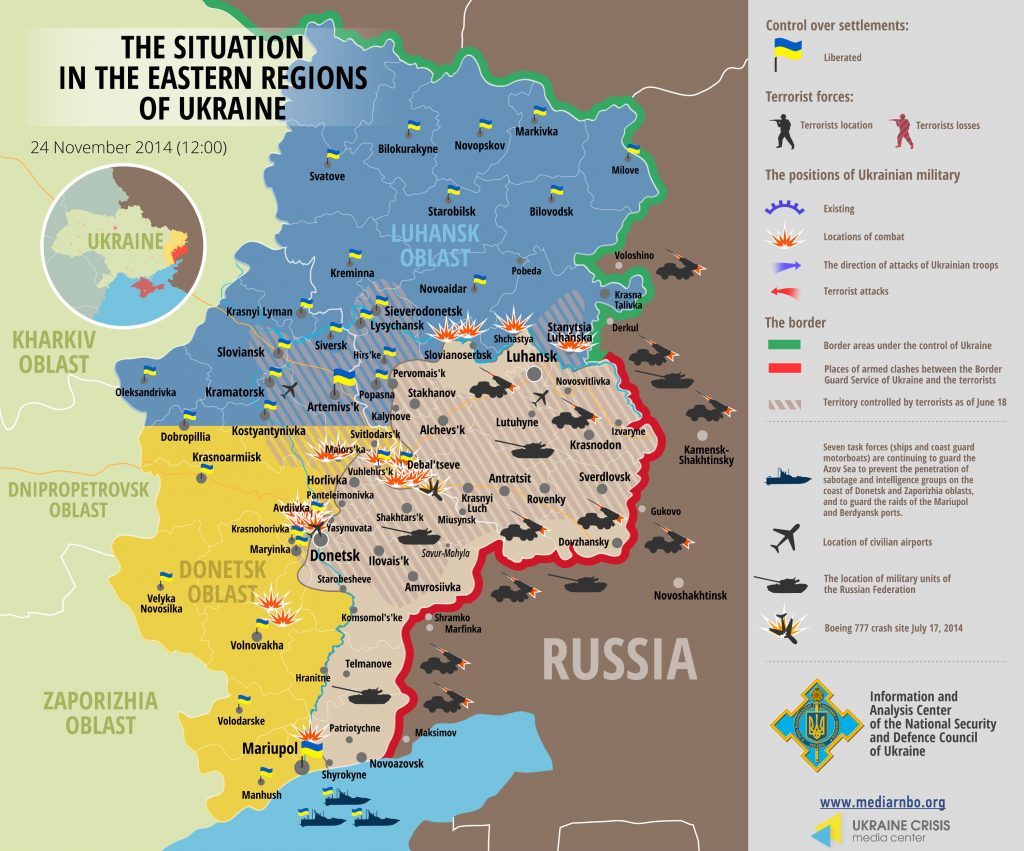 According to Colonel Lysenko, on-going aerial reconnaissance continues by means of unmanned aerial vehicles. “In general we recorded 7 flights in the areas of settlements Sartana, Blagodatne (Volnovakha region), near check point “Rybinske” and near Krasna Talivka. In Debaltsevo direction terrorists shelled the check points of ATO forces near Debaltseve five times with rocket launchers “Grad” and mortars. “The militants shelled our positions near Vuhlehirsk, Nikishine, Maloorlivka with self-propelled artillery, mortars, rocket-propelled grenades and small arms. Overnight on November 23,  terrorists pelted periodically the checkpoint of ATO joint forces near Artemivsk with small arms for 4 hours. Our soldiers stroke back and repulsed the attack, “- said Andriy Lysenko.

In Donetsk area throughout the day militants shelled Ukrainian positions at the airport twice with tanks and artillery. Also with artillery, mortars and small arms terrorists repeatedly shelled ATO positions near Pisky, Avdiyivka, Opytne, Tonenke, Shumy and Mayorske. Near the village Slavne terrorists used Grad MRLs. The airport is controlled by Ukrainian forces. On the outskirts of the airport enough forces are concentrated, required to provide support to the defenders of this strategic object. “Everytime the positions of enemy artillery or riflemen were spotted – Ukrainian military stroke back,” – added a spokesman for the National Security Council.

Initiated by the Ukrainian party, talks were held between special representatives of the OSCE in Ukraine and militants of the so-called “Great Army of Don” led by Ataman Kozitsyn in order to create conditions for the restoration of gas and electricity supply in Trohizbenka village. “On Sunday morning Ukrainian repairmen began the restoration works. However, the militants broke their promises and opened grenade fire on a team of repairmen. The work had to be stopped so as not to expose people to danger. We point out that Trohizbenka because of constant attacks of terrorists remains for over three weeks without gas and for more than a month – without electricity. In peacetime it was inhabited by more than 2 thousands people, “- said Colonel Lysenko.

The situation in Lugansk direction remains tense; the terrorists shelled ATO positions near the settlement Stanytsia Luganska heavily with grenade launchers, mortars and small arms. Artillery and mortar strikes were delivered to the town of Schastya and the village Makarove. Shelling near Stanytsia Luganska was recorded by the OSCE monitors. The shelling intensity in Mariupol direction was slightly decreased. The terrorists delivered a mortar strike to the positions near Talakivka.

The US Ambassador John Tefft asserted the absence of any obvious steps from the Russian side to influence the situation in the east of Ukraine. “Quite the opposite, the situation becomes more critical there”, – Tefft argued.