Kyiv, 4 December 2014 – “Within the last day Russian-paid mercenaries used multiple rocket launcher systems, shelled and attacked a record number of times. Terrorists shelled anti-terrorist operation (ATO) forces 71 times in total. The above may be testimony to the fact that the so-called humanitarian aid of the Northern neighbor reached militants’ positions and is being actively used,” informed Colonel Andriy Lysenko spokesman of the Information Analytical Center of the National Security and Defense Council (NSDC) at a briefing in the Ukraine Crisis Media Center. 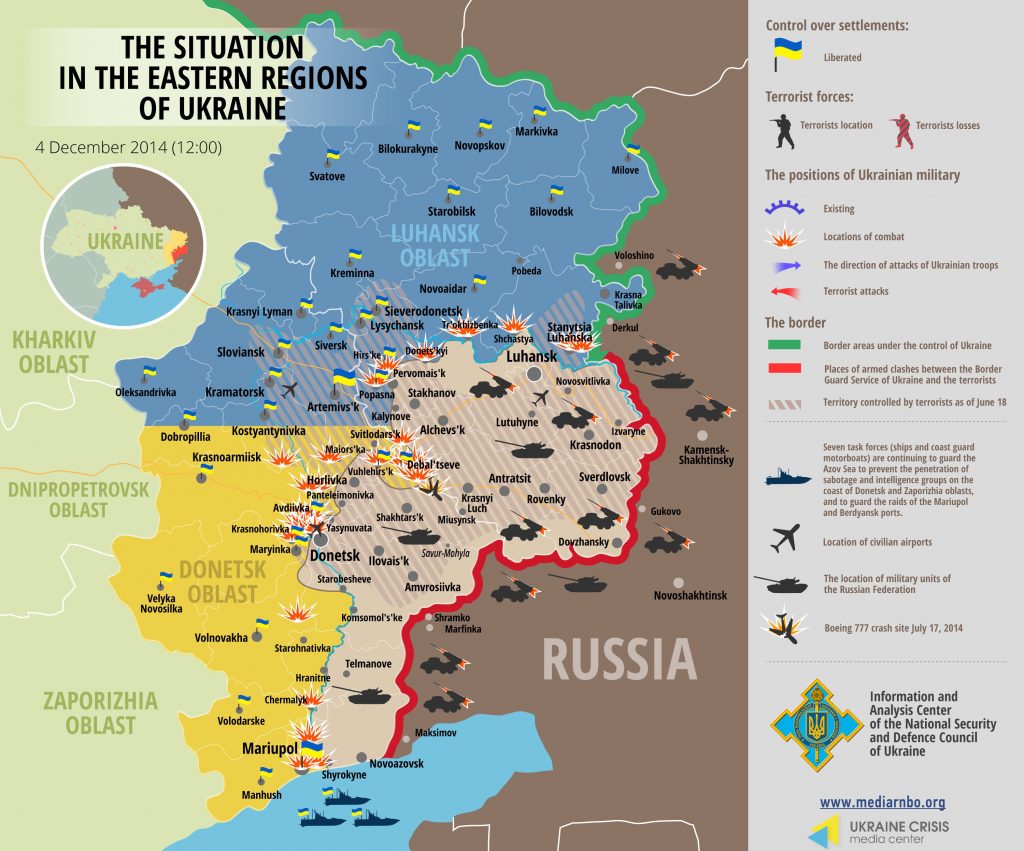 The fire at the Donetsk airport doesn’t stop. Ukrainian positions near Avdiyivka were fired upon twice with tanks and artillery. “In the Donetsk region resistance to the occupants is growing being widely supported by the local population. On 1 December the fighters of a local partisan unit in cooperation with the Ukrainian Armed Forces eliminated approximately 50 militants at a farm near Staromykhailivka. Next day 10 and 50 more militants were eliminated near Petrivka,” added the NSDC spokesman.

Shelling outside Debaltseve increased. The servicemen came under massive fire from Grad near Debaltseve itself, Sanzharivka, Kamjanka, Chornukhyne and in the outskirts of Dzerzhynsk near Artemove. Positions near villages Nikishyne, Ridkodub and Mius were fired at with mortars. The firing at the Southern direction intensified. ATO positions near Lutuhyne, Vynohradne, Talakivka, Kominternove and Vodyane were shelled with Grad multiple rocket launchers. Positions near population centers Bohdanivka and Chermalyk were shelled with mortars.

Yesterday at 15.00 in Luhansk region not far from the state border at the direction of Kolesnykivka (Ukraine) – Manotsky (Russian Federation) an engagement with a Russian subversive-reconnaissance group took place. “In this area border guards, Ukraine’s Security Service, Interior Ministry and Armed Forces were conducting a counter-subversive operation and discovered a Russian subversive-reconnaissance group. The enemy suffered losses and had to step back. 1 serviceman of the Ukrainian Armed Forces was injured. To evacuate the injured a border guard unit from the cover team came at a Cougar armoured vehicle. When evacuating the injured the vehicle trapped a mine, however the armour saved life to the border guards and to the injured serviceman who got minor injuries,” noted Colonel Lysenko.

1 Ukrainian serviceman was killed in action, 13 got wounded within the last day.

President of the European Council Donald Tusk and NATO Secretary General Jens Stoltenberg stated that the EU and NATO keep working in close cooperation over the Ukraine crisis resolution and call on Russia to stop destabilizing Ukraine. “Russia has a special responsibility here: it must withdraw from eastern Ukraine, stop supplying troops and equipment, allow for effective control of the border and let the OSCE carry out its mission,” said Donald Tusk.

Jens Stoltenberg stated that Russia has violated fundamental principles – the borders cannot be changed by force. “Disputes should be settled by talks, not by tanks,” he said. The Joint Statement made based on the results of the EU-US Energy Council says the European Union and the United States will reinforce measures against separatists, coordinate the application of their respective sanctions regimes as well as call on Russia to withdraw its troops from eastern Ukraine and to provide for the security at the border.

US President Barack Obama added to the words of support to Ukraine expressed by the leaders of the EU states. He said that the US and the EU will continue their economic pressure on Russia through sanctions and other restrictive measures in order to make it change its aggressive behavior.