Kyiv, December 6, 2014 – Situation in the ATO zone remains stringent, terrorists continue outshooting Ukrainian dispositions.  There were no fallen among Ukrainian military servicemen, three servicemen were wounded in past 24 hours. Advance of two convoys from Russia numbering almost 120 units of equipment has been recorded. At 5:30 am a convoy consisting of 9 APCs and 103 heavy trucks (Ural trucks, KAMAZ trucks) proceeded from the territory of the Russian Federation through Dubrovka in Rostov region towards Dmytrivka. 7 “humanitarian” tanks advanced through Izvaryno towards Luhansk at 7^30 am”, – informed a deputy head of the Information and Analysis Center of the National Security and Defence Council Volodymyr Polevyi during his media briefing in Ukrainian Crisis Media Center. 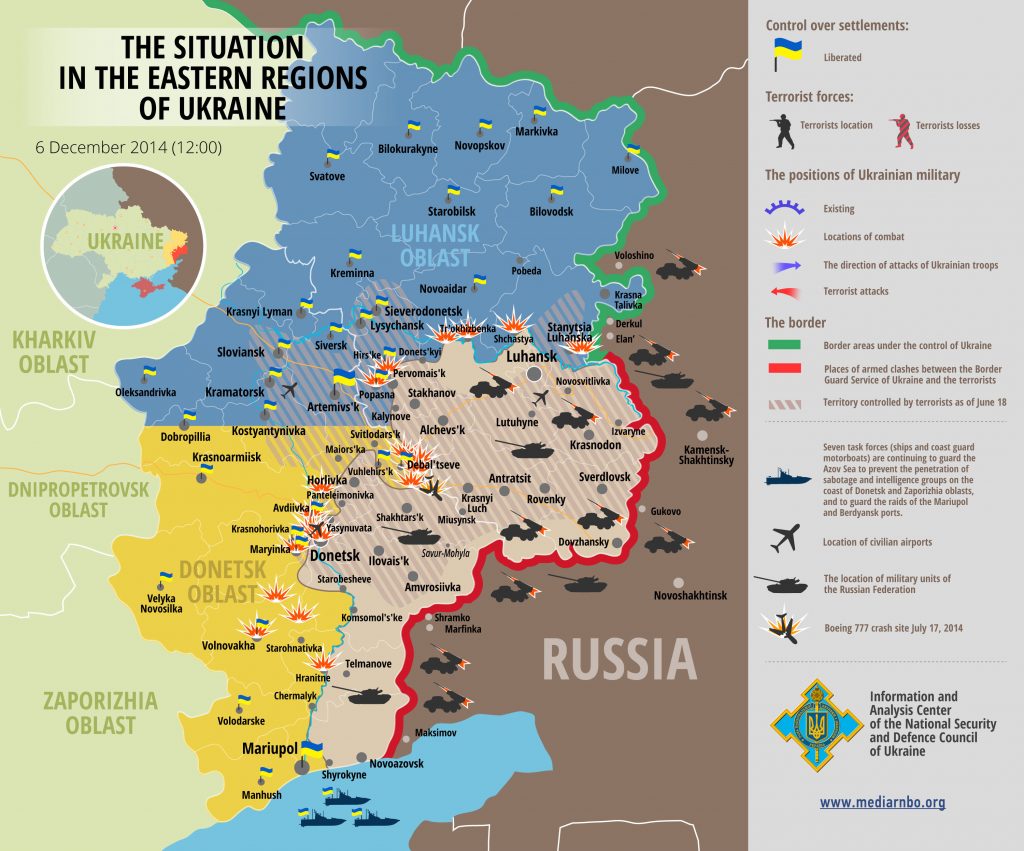 In past 24 hours terrorists were shelling and attacking dispositions of Ukrainian servicemen. In Donetsk terrorists shelled Ukrainian troops on the territory of the airport 4 times using tanks, grenade launchers and light weapons and attempted yet another assault.  “Ukrainian troops defeated the attack; the enemy incurred losses and retreated. ATO forces platoon post nearby the airport was shelled with mortar fire three times. Artillery of the enemy aimed at flanks of our dispositions nearby Opytne and Avdiyivka”, – added Volodymyr Polevyi.

Ukrainian troops are conducting search-strike activities on all directions in order to liquidate subversive gangs of the enemy; combat engineers are unmining explosive devices as well as shells and mines received by terrorists as “humanitarian aid” and used by them for inhabited localities shelling

In past 24 hours Ukrainian artillery delivered 21 fire attacks on investigated clusters of militants’ manpower and equipment in order to destroy firing points and eliminate threat not only to Ukrainian troops but to civilians as well. “Yesterday two civilians died in Donbas as a result of terrorists’ shelling. According to official data, 93 civilians died of militants’ fire since September 5, and this statistics comprises only the territories controlled by Ukraine”, – pointed out  the IAC NSDC representative during the media briefing.