Kyiv, 22 December 2014 – “Silence regime remains in force in eastern Ukraine. No Ukrainian servicemen were killed or wounded within the last day. However particular cases of silence regime violation on the part of terrorists are being observed. Biggest number of engagements was spotted near the Donetsk airport where terrorists made 9 armed provocations and launched one attack using grenade launchers, sniper weapons and small arms. The attack was repelled,” informed Colonel Andriy Lysenko, anti-terrorist operation (ATO) spokesman at a briefing at the Ukraine Crisis Media Center.  Terrorists fired with mortars and grenade launchers at the positions of Ukrainian military near Debaltseve, in the area of Hranitne village (Volnovakha district), near Nikishyne village (Shakhtarsky district) of the Donetsk region. 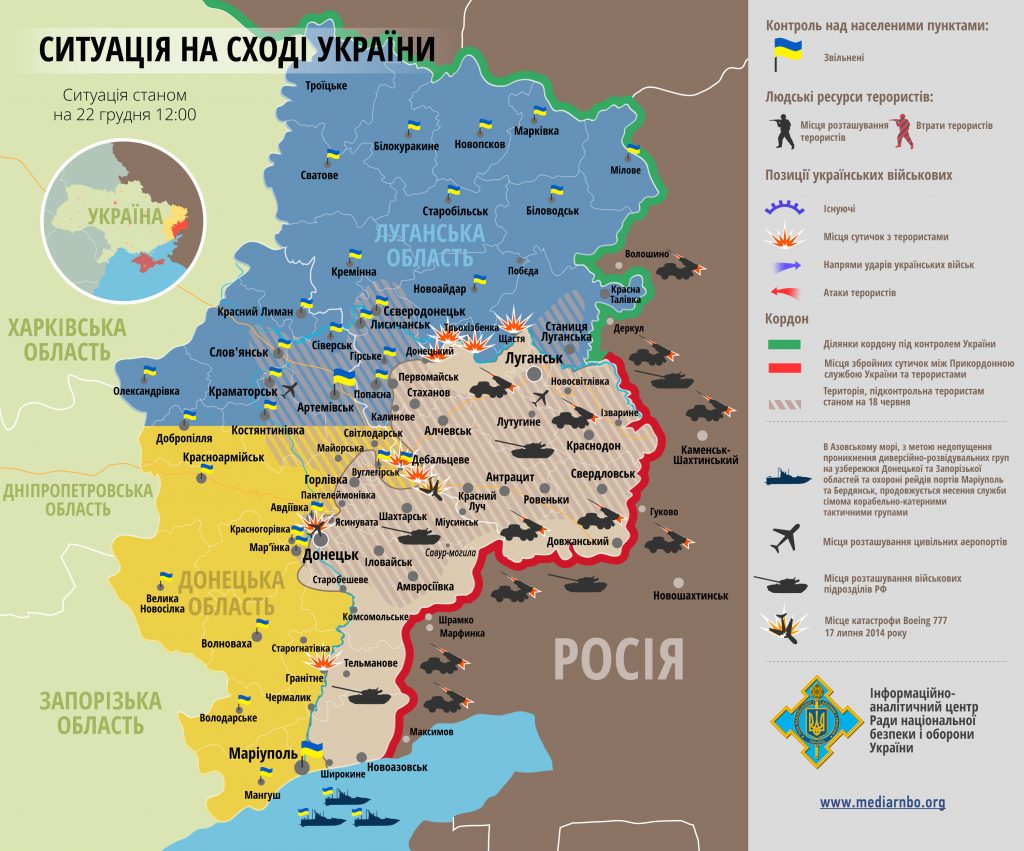 At the Luhansk direction militants were seen active near Shchastya town of Novoaydar district, the enemy opened fired at Ukrainian positions from mortars and small arms. “As per a reconnaissance report deserting among illegal armed groups members continues: in Shyrokyne settlement 10 local militants left their positions after not being paid,” added Colonel Lysenko at the briefing.

State Border Guard Service units keep carrying out security and defense activities at the Ukraine-Russian state border, administrative border with the temporary occupied Autonomous Republic of Crimea and at the delimitation line between the ATO forces and the militants. Within the last day places of service of the border guard detachments and places of deployment of the State Border Guard Service were not fired upon. Yesterday border guards once again spotted the UAVs deployed twice: above Mariupol and at the direction Velyka Novosilka-Uspenivka conducting aerial reconnaissance.

Yesterday Russia’s so-called 10th “humanitarian convoy” crossed into Ukraine. “Militants’ leaders claimed that 7 hours after all 190 vehicles of the “convoy” returned back to Russia. The most simple mathematical count shows that terrorists were able to unload a 20-tones truck in an average of 2 minutes 21 seconds,” said ATO spokesman.

At the same time other countries are helping Donbas in a legal way. On 19 December 40 trucks from the government of Poland carrying humanitarian aid for internally displaced from the ATO zone arrived in Kharkiv.