Kyiv, 24 December 2014 – Day 14 of the “silence” regime in eastern Ukraine was marked by the next round of unsystematic armed provocations by terrorists. “Most blatant fact was the shelling of a National Guard checkpoint with a BM-21 “Grad” multiple rocket-launcher system by militants at the crossroad Zolote, Debaltseve and Stanytsia Luhanska. There are no casualties within the last day, two servicemen were wounded,” informed Colonel Andriy Lysenko, ATO spokesman at a briefing at the Ukraine Crisis Media Center. 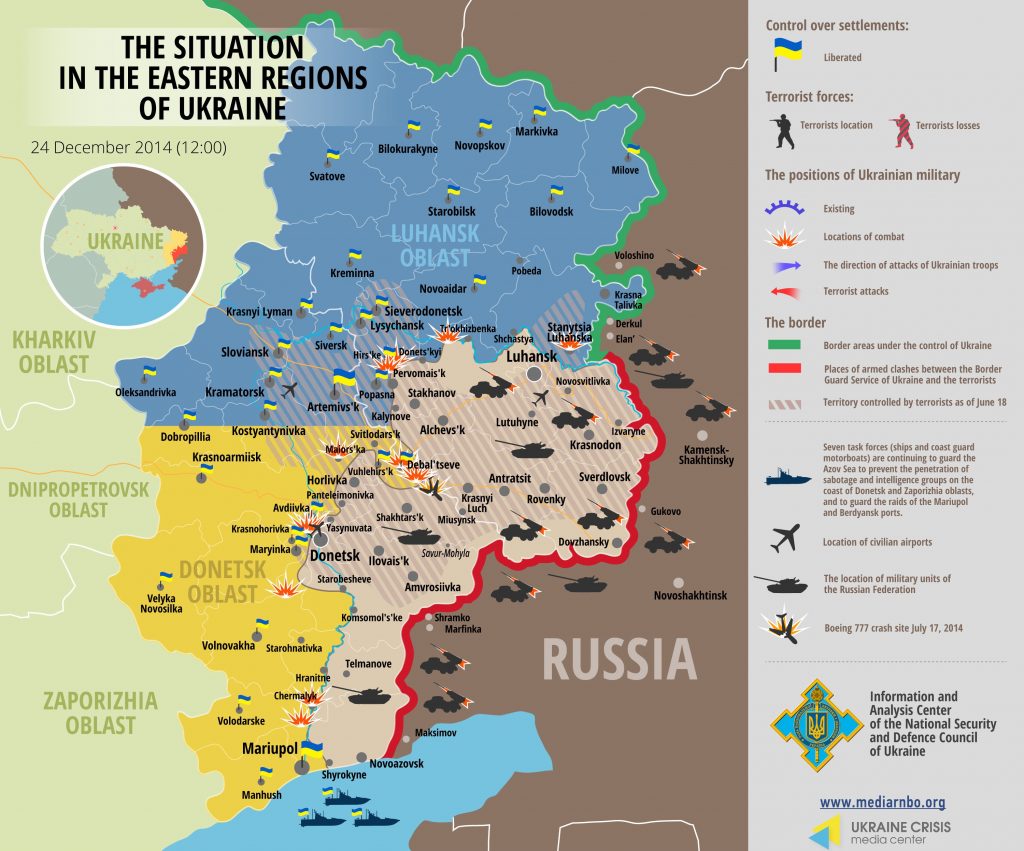 The enemy is not decreasing its reconnaissance activities. Ukrainian border guards once again spotted 4 UAVs deployed in the area of Sartana town in Donetsk region and 2 UAVs near Krasna Talivka in Luhansk region.

On the occupied territories militants keep unsuccessfully trying to take all control in their hands. “In Makiivka of Donetsk region armed clashes between the Chechen and local militants are observed as a result of ongoing re-distribution of areas of influence on the controlled territories that escalates the situation in town. There are confirmed reports that production of weapons, mortars in particular, destined for terrorist groups is being launched at the plants in Donetsk region controlled by militants”, said Colonel Lysenko.

Ukraine expands aid for conflict-affected people in the conflict zone. Yesterday border guards at “Makarove” control point let in the humanitarian cargo of the International Committee of the Red Cross destined for civilian population in Luhansk region. “This charity action was conducted in full accordance with Ukrainian and international humanitarian law, in full compliance with all required procedures and with all necessary supporting documents in place. Food products, medicine, personal hygiene and household items were transported in the trucks. A total of 8 trucks carrying a total of 28 tons of weight were let in,” explained the ATO spokesman.