Kyiv, 31 December 2014 – “Within the last day the situation in the anti-terrorist operation (ATO) zone has not considerably changed. Terrorists were seen using heavy equipment. At the same time militants are amassing forces by deploying new units to the delimitation line in the area of Donetsk, Debaltseve, Pervomaysk, Stakhanov and Severodonetsk,” informed Colonel Andriy Lysenko, ATO spokesman at a briefing at the Ukraine Crisis Media Center. As per the reconnaissance information both rotation and arrival of new units of the Russian Federation Armed Forces are taking place in Donetsk and in other localities. Part of the newly deployed troops are wearing the uniforms of the “DPR” militants. 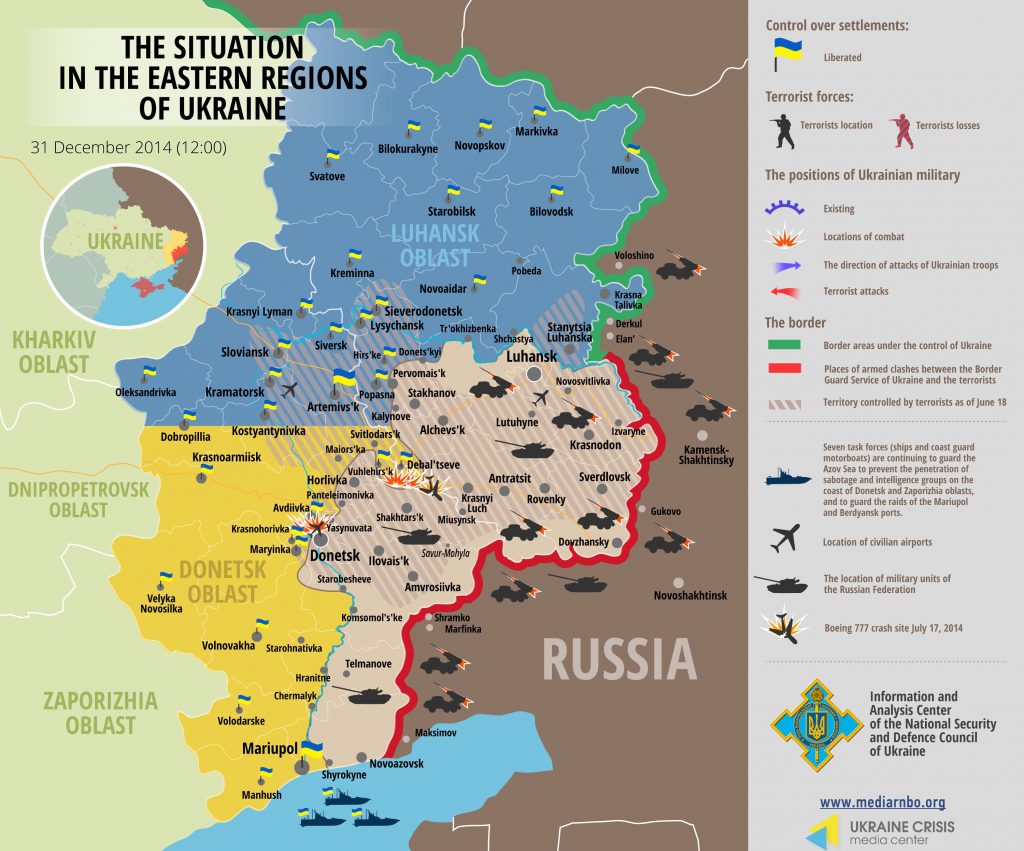 Despite the fact that new illegal groups are established to demonstrate decisive moods and readiness to re-start combat actions for the “independence” of pseudo-republics the morale of the militants is declining. “On the occupied territories campaigning is being held to enlist local population into regular units of the “DPR” terrorist organization. Following considerable losses on the part of the militants last summer and due to the problem of timely payment of remuneration the number of citizens striving to become terrorists has drastically decreased,” explained Colonel Lysenko.

Within the last day one Ukrainian serviceman was wounded, there were no killed in action.

Ukrainian authorities and European partners are helping peaceful local population of eastern Ukraine affected by terrorists’ actions. Danish Refugee Council has started a short-term project in Zaporizhzhia and Dnipopetrovsk regions to provide financial aid to internally displaced persons to improve their living conditions in the wintertime. Yesterday representatives of the organization presented their plans to provide a one-time financial aid to 2000 families, said 143 families have already received it.

Civilized world is increasing sanctions pressure on the Russian aggressor due to the Crimea occupation. US Department of the Treasury has announced that the US entrepreneurs need to wind down their business activities in Crimea within one month.  It is stated in the Executive Order placed on the web site of the US Department of the Treasury. According to earlier introduced sanctions the US legal entities and individuals are due to stop their business activities in Crimea until 12:01 am on 1 February 2015. This includes winding down of investment, operations, contracts, or other agreements that were in effect prior to December 20, 2014, involving the exportation, re-exportation, sale, or supply of goods, services, or technology to Crimea.