Kyiv, January 24, 2015 – «The thugs continue terrorizing Donbas population. This morning the terrorists have shelled Mariupol. According to the interim data of the Ministry of Interior, 10 people were killed. Exact count of the dead and the injured is being verified», said Colonel Andriy Lysenko, the ATO spokesman, during a briefing in the UCMC. Situation in the anti-terrorist operation (ATO) area is defined by highly intensive shelling of ATO positions by the terrorists. Illegal paramilitary units are trying to expand the territories under their control and adjust the demarcation line in their favour. Russian terrorist units are relocating their forces and resources, which proves further continuation of armed conflict. 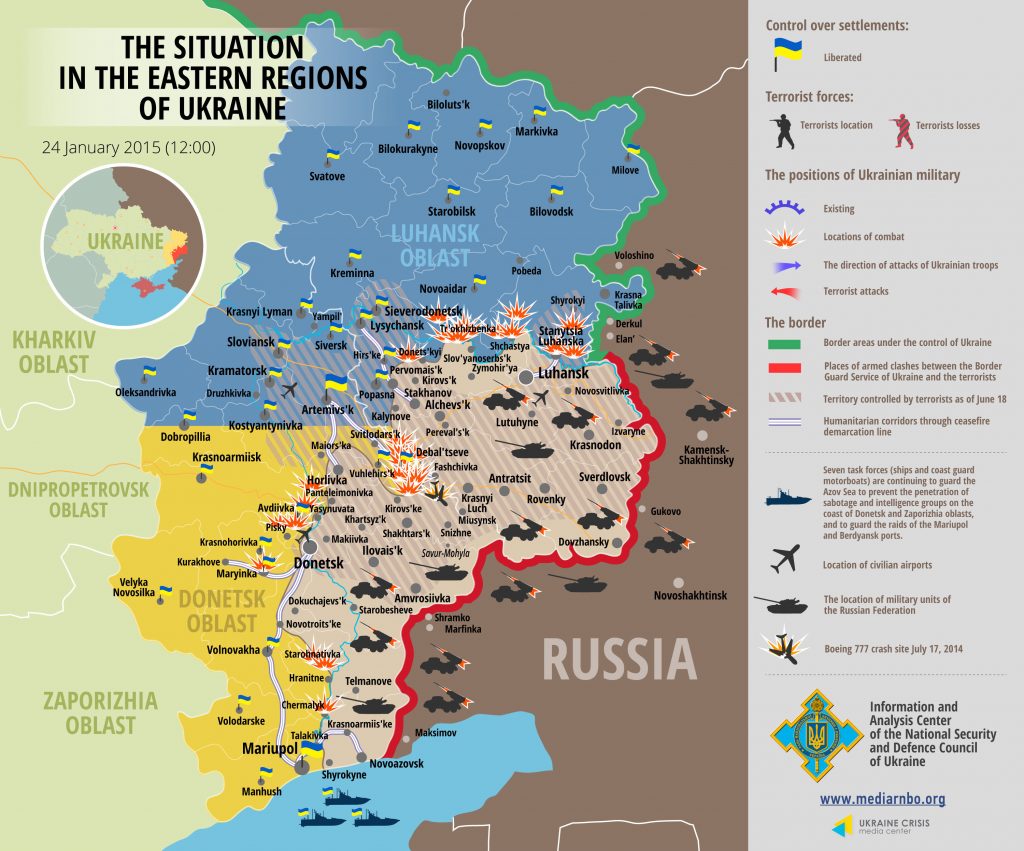 On Luhansk, Debaltseve and Donetsk directions the terrorists have engaged artillery, mortars, grenade launchers, tanks and Grad rocket systems several times. In particular, the terrorists 10 times attacked the checkpoint No. 29 near Novotoshkivske village (Popasna district) of Luhansk oblast and shelled it with multiple launch rocket systems BM-21 Grad, artillery, mortars and handguns. During the last 24 hours 1 serviceman was killed and 20 were injured.

Russia continues supporting the militants with new forces, military equipment and ammunition. “The Russian authorities announced the 12-th so-called “humanitarian convoy” to Donbas at the end of January – beginning of February. We would remind that the terrorists intensify provocation shellings and aggressive actions against Ukrainian servicemen right after having received another convoy from the Russian Federation”, Colonel Lysenko noted. The recent statement of the thugs’ leader Zakharchenko on continuing the offensive up to the borders of Donetsk oblast also evidences the fact that the terrorists are backed up by Russia. «This once more proves that both Russia and puppet paramilitary units in the eastern Ukraine are unwilling to settle the conflict peacefully», ATO spokesman added.

Ukrainian artillery smashed a column of Russian mercenaries in the vicinity of the Donetsk airport. More than 10 terrorists were captured. Military service cards of DNR and the Russian Armed Forces, as well as an ID card of the Russian Federation citizen were found during the search of the captured attackers.

In Stakhanov the illegal militants have organized a provocation act entailing both misinformation and use of force to gear up destabilization among civilians. «Terrorists have mounted a 82-mm mortar on the military commissariat territory and are shelling the city districts. They claim that these are Ukrainian armed forces who launch missiles, despite the fact that the nearest position of Ukrainian army is located more than 20 km away, which considerably exceeds the maximum range of a 82-mm mortar. By this fire the terrorists have already destroyed a kindergarten and a number of other buildings in the centre of the city. About 70 unexploded projectiles lay around», Andriy Lysenko noted. Yesterday in Horlivka and Debaltseve cities of Donetsk oblast two civilians were killed in the result of terrorists’ artillery fire.

Moreover, due to the terrorists’ attacks in Donetsk oblast 52 settlements were cut off power supply in Shakhtarsk, Maryinka, Artemivsk, Volodarske, Telmanove, Novoazovsk and Yasynuvata districts, parts of Donetsk, Horlivka and Avdiyivka also have power blackouts.