Kyiv, 6 February 2015 – “Yesterday 8 Ukrainian servicemen were liberated from militants’ captivity,” said Colonel Andriy Lysenko, ATO spokesman at a briefing at the Ukraine Crisis Media Center. They were swapped for 9 detained illegal armed group members on the “all for all” terms. Preliminary agreement was reached to arrange the corridor for evacuation of civilians from the area of Debaltseve. However at night militants shelled the city three times with mortars and BM-21 Grad multiple rocket launcher systems. In the anti-terrorist operation (ATO) zone militants are intensively shelling the ATO forces positions, conduct combat and active subversive-reconnaissance activities along the delimitation line, at the infrastructural facilities and on the logistical supply routes. “In the area of Debaltseve the intensity of shelling has slightly decreased in the last day. At the same time the situation remains unquiet at the Luhansk and Mariupol directions,” added Colonel Lysenko. 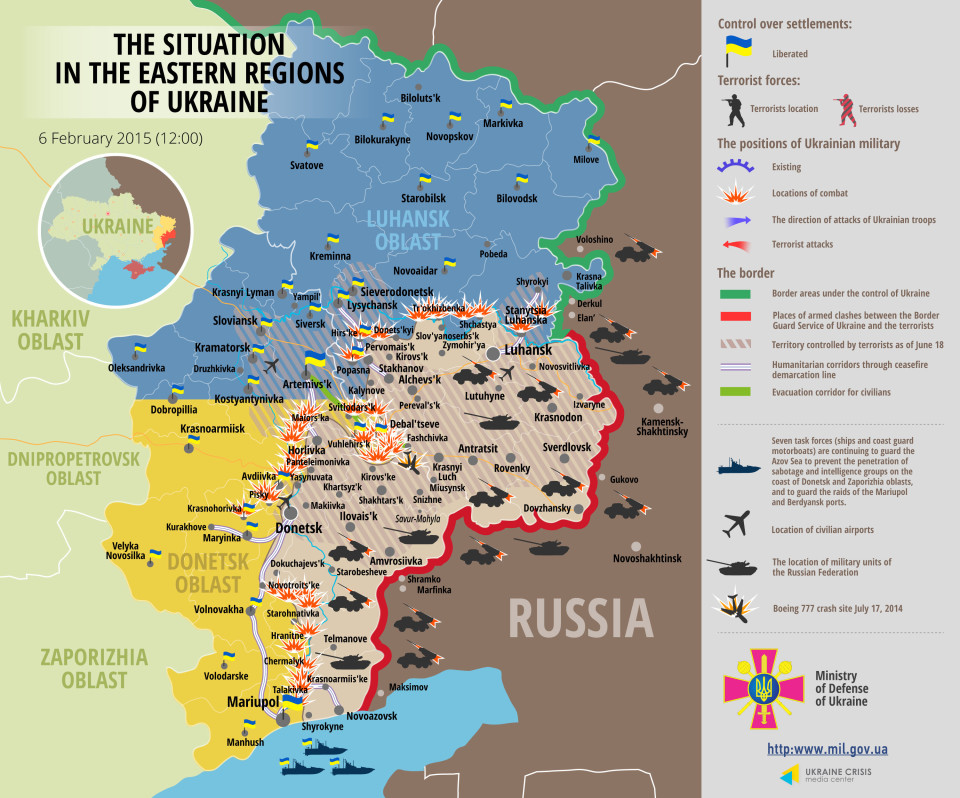 Having fired numerous times from various kinds of weapons militants took to storming of the strongholds and block posts near Ridkodub of Artemivsk district in Donetsk region and near Mius village of Popasnyansky district in Luhansk region. “Militants shelled Ukrainian positions 5 times with Grad systems, tanks and mortars. All militants’ attacks were repelled,” noted the ATO spokesman.

Yesterday from the side of Sakhanka Russian mercenaries opened fire from BM-21 Grad multiple rocket launcher systems at the dislocation places of the border guard detachment and at the control point near Sartana. Militants launched around 40 Grad shells and fired over 15 times with mortars. “Due to the defensive engineering constructions and fortifications there are no losses among the servicemen,” added Colonel Lysenko. Attempts to attack the ATO forces result in heavy losses for the illegal armed groups. On 4-5 February Ukrainian Armed Forces destroyed 60 militants, 4 enemy’s tanks and 2 self-propelled artillery systems. The ATO forces blasted 7 ammunition storage facilities of militants near the town of Bryanka in Luhansk region.