Kyiv, February 12, 2015. Pro-Russian militants are bolstering their forces in the most tense areas – northeast of Luhansk region and near Debaltseve at the foremost. Despite the statements of the high-ranking Russian officials regarding the absence of the Russian military equipment and troops on the territory of Ukraine, precisely this kind of military equipment crossed the Ukrainian-Russian border. “50 tanks, 40 multiple rocket launcher systems (Grad, Uragan and Smerch) and 40 APCs moved across the Russian-Ukrainian border in the area of Izvaryne in night of 12 February,” said Colonel Andriy Lysenko, ATO spokesman, at a briefing at Ukraine Crisis Media Center. 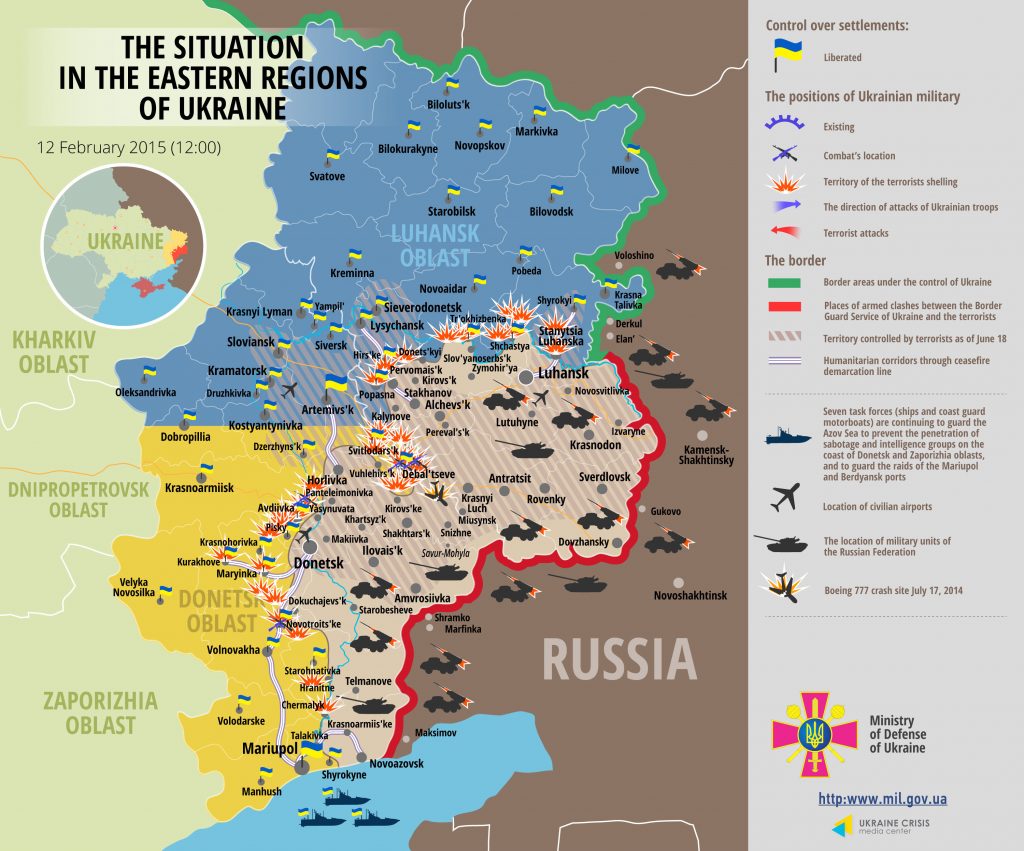 Militants shelled Debaltseve and the ATO forces base camp with Grad and artillery 14  and 20 times respectively over the last day. As a result, the infrastructure and residential houses in the area are ruined. “Pro-Russian mercenaries are trying to take positions on the heights in the area of Lohvynove village in Donetsk region in order to force the Ukrainian troops out from this strategic area,” noted Colonel Lysenko. Illegal armed groups tried to storm the Ukrainian positions in the area of Novotroyitske, Chornukhyne and Kamjanka to no avail. Ukrainian Armed Forces repelled all attacks and did not lose any positions. Insurgents also intensified their attacks at the Mariupol direction, shelling Chermalyk twice over the last day. A gas pipeline that supplied a local hospital in Shchatya was damaged under militants’ artillery fire; the hospital is currently left without gas supply. “The number of people, trying to leave frontline towns has drastically increased. It is another confirmation that clashes got more intensive. 3,108 people fled from the dangerous areas of Donbas in the last 24 hours. Previously, around 800 people were leaving daily,” added Colonel Lysenko.