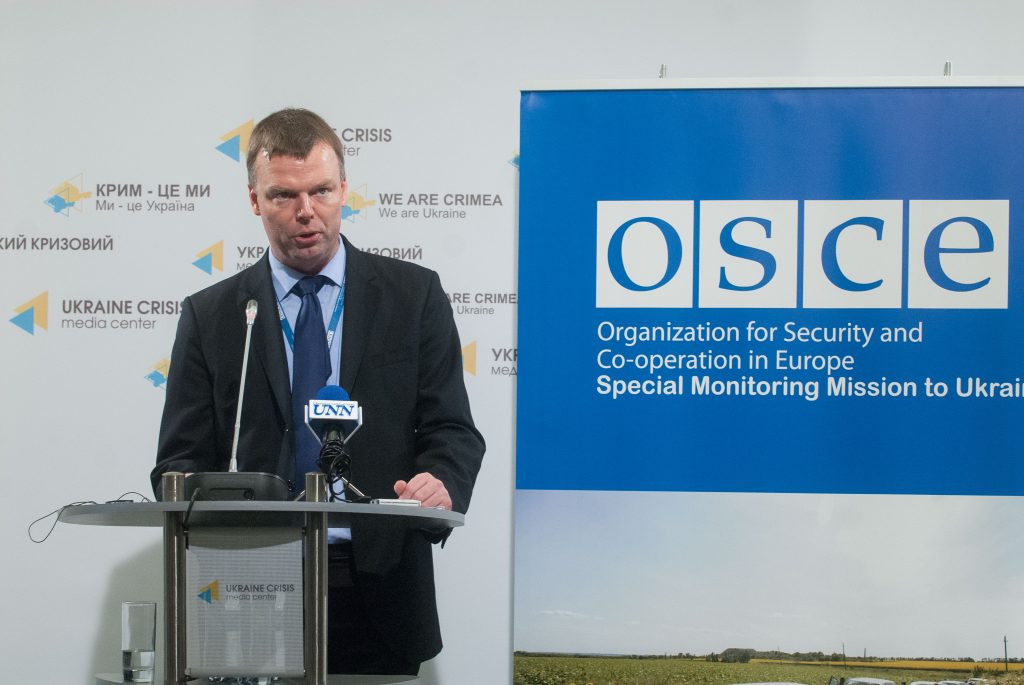 Kyiv, March 12, 2015. Forces of the self-declared republics in eastern Ukraine obstruct the work of international observers, including their attempts to monitor the situation on the Ukraine-Russia border. Members of the so-called “Luhansk People’s Republic” denied the monitors access to the villages of Parkhomenko, Vesnyane and Sverdlovsk, stated Alexander Hug, Deputy Chief Monitor of the OSCE Special Monitoring Mission in Ukraine, during the press-briefing at Ukraine Crisis Media Center. Meanwhile, OSCE observers spotted traces of tracked vehicles on the road across the border between Ukraine and the Russian Federation. “The so-called “Donetsk People’s Republic” forces prevented us from going to Shyrokyne. We also could not monitor the security situation on the H-20 highway because of resistance from both sides,” Mr. Hug added.

Alexander Hug noted positive steps toward the implementation of Minsk agreements. The number of attacks has considerably decreased in the last few days, yet Shyrokyne and the areas around Donetsk airport remain the hotpots of the conflict. “The belligerents continue to withdraw their heavy weapons from the contact line. This shows that the signatories of Minsk agreements are taking steps to implement the second clause of the accords,” he said.

Mr. Hug reported that the OSCE has succeeded in facilitating the launch of de-mining of Kominternove, which was previously subject to consistent shelling. Furthermore, the observers and representatives of the International Committee of the Red Cross managed to get access to the remnants of the Donetsk airport to recover the bodies of 14 Ukrainian soldiers.

Alexander Hug noted the observers couldn’t verify the heavy weapons withdrawal because they did not obtain complete information from particular parties engaged in the conflict. “We need complete inventory lists, withdrawal routes and description of concentration sites where these weapons are stored,” Mr. Hug said. All sides should provide free and unlimited access to the concentration sites for the observers. “The 100-mm artillery systems are withdrawn for just 25 km in accordance with Minsk agreements. The monitors should have an unfettered access to these locations, so we could avoid the new wave of hostilities,” Mr. Hug concluded.