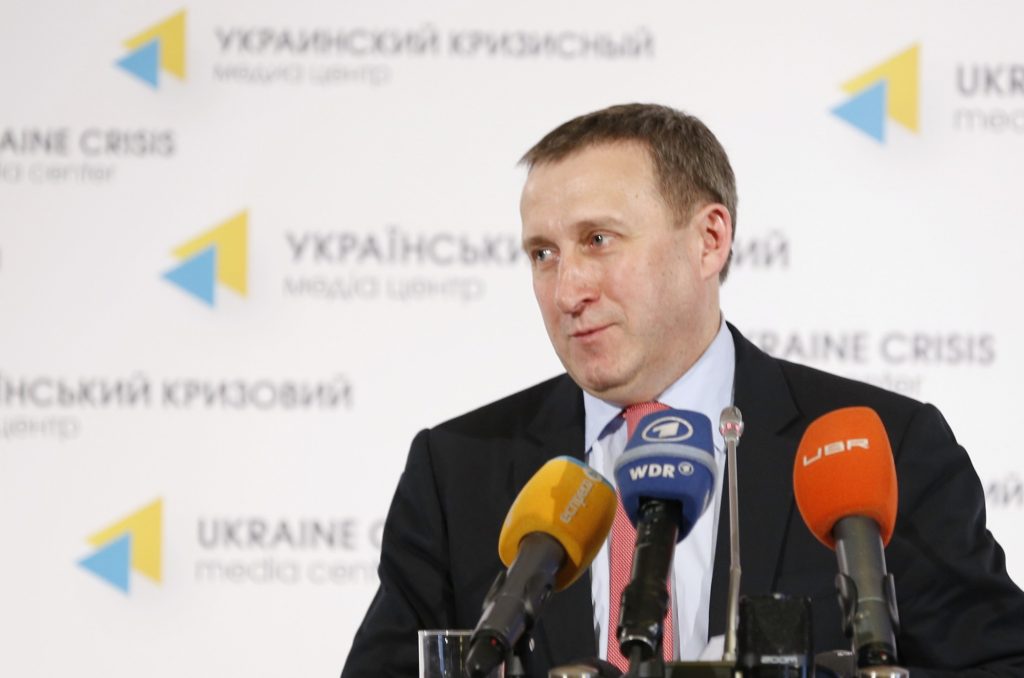 Kyiv, 18 April 2014 – Further to the four-party talks in Geneva between the US, EU, Russia and Ukraine, development of a mechanism began which would help implement the decisions of the OSCE Monitoring Mission. This was announced at a press briefing at the Ukraine Crisis Media Center by acting Foreign Minister of Ukraine, Andriy Deshchytsya, after his return from Geneva.

He emphasized that the recently reached agreement includes the disarmament of illegal armed groups and paramilitary formations, unblocking of illegally seized government buildings and their return to local authorities, removal of checkpoints in the streets to ensure that locals can move freely. At the same time, those who will voluntarily leave the buildings and public places and surrender their weapons will be granted amnesty (except for those found guilty of capital crimes). “The talks were very difficult and lasted the whole day, with some interruptions made only to have the necessary consultations in a two- or three-party format. Nevertheless, all parties eventually managed to come to a consensus on the adoption of the Geneva Statement,” said Andriy Deshchytsya. For reference, the Geneva talks on the situation in Ukraine were held between the US Secretary of State John Kerry, Head of Russia’s Foreign Ministry Sergey Lavrov, EU High Representative Catherine Ashton and Andriy Deshchytsya, who represented the Ukrainian government.

The key role in the implementation of the decisions will be assigned to the OSCE Monitoring Mission, which will participate directly in the negotiation process and in the handover of buildings, streets and roads to the local authorities. Today, there are around 100 mission representatives in Ukraine, including 10 in Donetsk, but the number of monitors can be increased upon the request of the Ukrainian party to make sure they can be present in several places at the same time. According to A. Deshchytsya, today, April 18, a meeting is scheduled with Christian Schoenenberger, the Ambassador of Switzerland in Ukraine (OSCE presiding country) and the Deputy Head of the OSCE Monitoring Mission in Ukraine, to discuss the work schedule and involvement in the handover of the buildings. “Soon we would like to discuss with OSCE if they have the operational capability to start work on the ground immediately,” said Mr. Deschytsya. Russia also has to take part in the work of the OSCE Monitoring Mission.

According to the acting Minister, there is a number of issues on which the participants of the Geneva talks failed to agree in principle, and therefore those issues were not included in the joint statement. “We discussed such topics as the Ukrainian constitution, federalization versus decentralization, and we also touched on the Russian language. However, since we couldn’t reach a consensus on these issues, we did not include them in the document. This is why we have to work more with Russia, with the support of our international partners, to find a solution to these issues as well. At the same time, we have no doubt that Crimea is an integral part of Ukraine and we will take political and diplomatic measures to return Crimea under the full jurisdiction of Ukraine,” said A. Deshchytsya.

Mr. Deshchytsya said the Ukrainian government has set a tight deadline for the separatist to give up. “We are all human beings, and it is Easter now, a holiday which should itself lead to some de-escalation. If those who are supposed to leave the buildings and surrender their weapons are ready to do so, we will ask the OSCE to act as our go-between and to conduct the negotiations. Otherwise, more concrete steps will be made after Easter.”

“Minister Lavrov promised at the meeting that Russia wants de-escalation of the conflict in Ukraine. In a few days we will see if he was sincere,” said A. Deshchytsya.

Andriy Deshchytsya is a Ukrainian diplomat, the Ambassador Extraordinary and Plenipotentiary of Ukraine, Special Representative of OSCE Chairperson-in-Office for Conflict Resolution since 2012, Acting Minister of Foreign Affairs of Ukraine since 27 February, 2014.