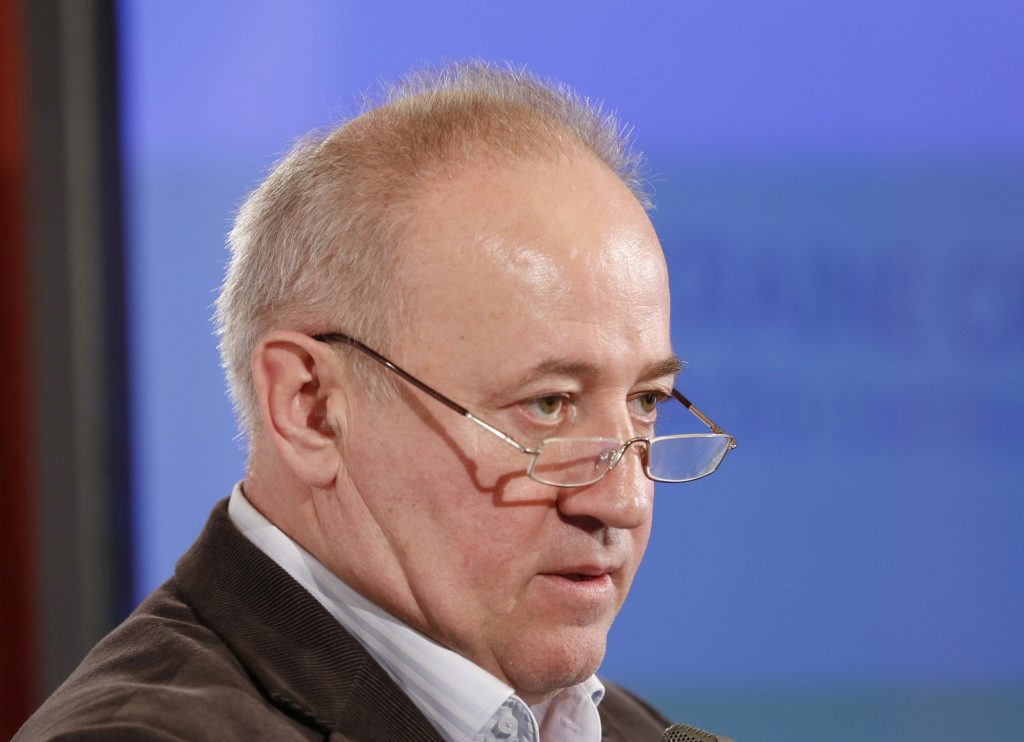 Kyiv, 18 April 2014 – Member of Parliament, Head of the Verkhovna Rada Organized Crime Control and Anti-Corruption Committee, Victor Chumak spoke about Verkhovna Rada’s extensive work on anti-corruption reform at a press briefing at the Ukraine Crisis Media Center. “Honestly speaking, if we implement all legislative initiatives for anti-corruption measures currently pending in the parliament, we would have one of the best legal frameworks to minimize or effectively counteract corruption,” he noted.

He said that several bills are being considered by the parliament that are extremely important to eliminate corruption in the country. In particular, law no. 4556 was passed last week which seriously contributes to combatting corruption in the following ways:
– Introduction of imprisonment for all corruption crimes;
– Imposing responsibility for providing knowingly false information in the income declarations filed by public officials;
– Increasing the liability of legal persons;
– Consideration of anonymous letters.

Viktor Chumak noted that anonymous posts related to corruption is a global practice. “Though it must be clearly understood that relevant anonymous messages need to meet certain criteria: pointing to a specific instance of corruption, particular person who is involved, the circumstances that were made known to the person addressing the message and the fact that it could be easily and clear verified. If all of these facts track, then anonymous message is accepted and considered.”- he said.

The next bill for today is № 2012а. This bill requires state agencies, in particular the Treasury, report online of any expenses on treasury bills of the State budget. Anyone can visit the site that will be operate in the State Treasury and keep track of where and on which accounts the funds are transferred.

Another important task for this year according Mr.Chumak is enactment of the National Anti-Corruption Bureau law. At present, there are three relevant bills – one is developed by Civic Platform expert group, and the other two are developed by a group of experts of the Cabinet of Ministers of Ukraine. “Those three bills have some differences, nevertheless, I hope we are here to create the Bureau and I think we will find common ground” – said the politician.

Mr.Chumak also informed, that a draft of law on transparency of the State Registers of Immovable Property Rights was registered on April, 17th. He underlined that such a law is revolutionary for Ukraine. The bill was developed in collaboration with the Ministry of Justice of Ukraine and the Government Registration service of Ukraine. It was signed by 17 MPs from all parliamentary factions and groups. MP informed, that under this bill, in order to determine who owns a particular object of property, the entrance to the state registration service base, providing data and name of the object is required. This project will also be tied to the land registry, so it will possible to obtain information on land. “This will be an open window for journalistic researches”, – Mr.Viktor Chumak said. He added that this service will cost 10 UAH.

Viktor Chumak said that Ukraine can not “resolve the East issue” without reforms. “If Eastern part and overall Ukraine will not feel in the next 3-4 months that our Government and politicians are truly involved in the public policy reform, then we will not get the main thing that is now of a vital importance – public trust. Without this trust, no reform can be implemented”- he said.

Viktor Chumak, Lawyer, MP, Head of Organized Crime Control and Anti-Corruption Committee of the Parliament, Major General of Justice. Prior to 2010, headed the Department of Analysis and Security of International Centre for Policy Studies. From 2010 to 2012 he was a Director of the Ukrainian Institute for Public Policy. Since December 2012 he has been an MP from the UDAR Party.