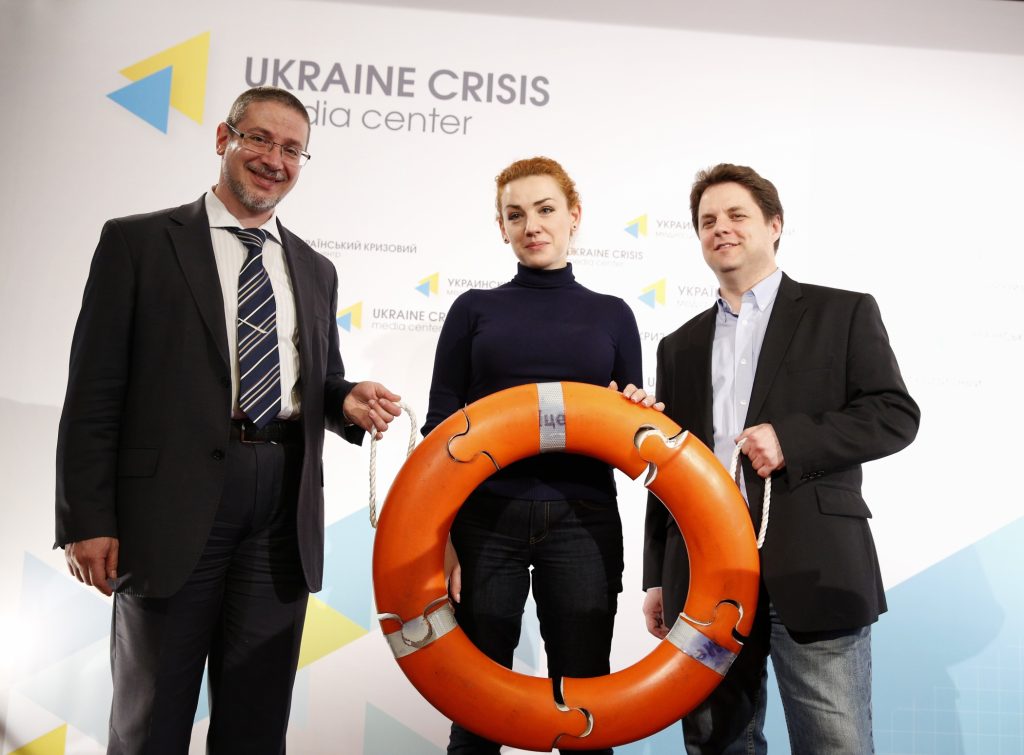 Kyiv, 23 April 2014 – Member of Parliament Lesya Orobets together with the representatives of business and non-government organizations have made an open call to newly established political parties to unite into a single force for Kyiv City Council election. This was announced during a joint press briefing at the Ukraine Crisis Media Center. The symbol of the union – a life ring – was also presented at the briefing.

“Joint effort of young democratic forces may become a life ring for Kyiv. We have to run for Kyiv City Council together,” says MP Lesya Orobets, who has already announced her intention to run for Mayor of Kyiv, “If we do not unite, there is every chance that we will witness a situation similar to what happened during the previous Kyiv mayor election. Back then, votes were distributed among democratic forces who failed to come to an agreement with each other, which resulted in the re-election of Leonid Chernovetskyi who bribed voters by distributing bags of buckwheat.”

Participants of the press briefing urged Demokratychnyi Alyans (The Democratic Alliance), Syla Lyudey (The Power of People), Volya (The Freedom), Demokraty (The Democrats) and other young political parties and unions to unite around the Maidan values.

“Unfortunately, sometimes even new, young parties are formed based on an old principle of putting leaders first, and not the values,” said Mykhaylo Vynnytskyi, economist, sociologist, political analyst, professor at the Kyiv Mohyla Academy, “But it wasn’t the leaders we stood for at Maidan, it was the values. If we go back to electing leaders instead of values, we will betray Maidan.” Furthermore, according to the political analyst, the group of supporters of the new political forces is still rather limited and almost identical.

The need for consolidation was also supported by socially responsible Ukrainian businesses. Valeriy Pekar, co-founder of the New Country project, member of the Strategy Department of the Civic Operative Center, said: “We cannot build a new country without new people. The new country begins with the renewed Kyiv, and it is the target to be achieved by the civil society born at Maidan. If we change Kyiv, we will change the entire Ukraine. Kyiv stood up and won, and now these same people should finally clear our loved city of corruption and lies, save it from destruction and turn it into a city everyone dreams to live in.”

Lesya Orobets is a Member of Ukrainian Parliament, candidate for mayor of Kyiv.

Valeriy Pekar is a co-founder of the New Counter Project, member of the Strategy Department of the Civic Operative Center, professor at the Kyiv Mohyla Business School.