Kyiv, April 27, 2015. Russia-backed militants have undertaken their most extensive attacks on Shyrokyne since last February, firing on the town for over 12 hours. Shyrokyne is located 20km from the major port city of Mariupol. Oleksandr Motuzyanyk, Administration of the President of Ukraine spokesman on issues connected with ATO, at the press briefing at Ukraine Crisis Media Center commented: “Militants are putting the lives of the OSCE monitors under threat as they struck the area where their observation point was located”. Militants opened fire from the artillery systems located in the village of Sakhanka, located five kilometers from the frontline. In their most recent report OSCE monitors spotted 17 tanks, three self-propelled artillery systems and 60 APCs on occupied territories near Shyrokyne. 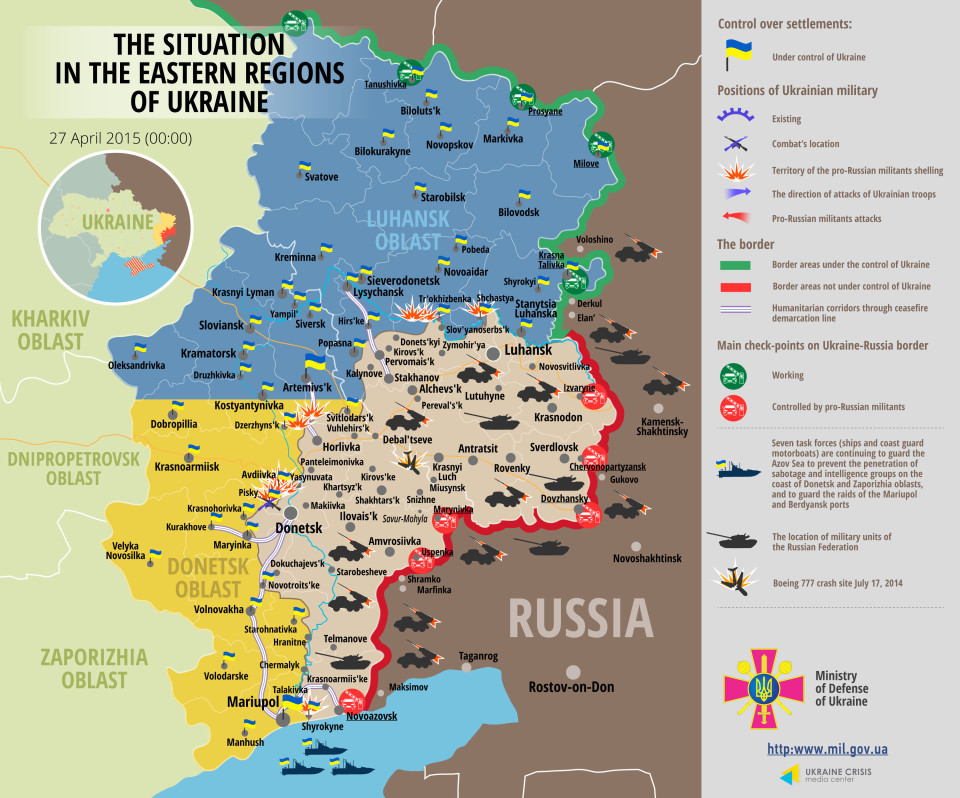 Ukrainian representatives presented suggestions to the OSCE Special Monitoring Mission as well as to a representative of the Russian Federation on how to demilitarize Shyrokyne at the Joint Coordination and Control Center. “The plan foresees a complete ceasefire, withdrawal of military units by all parties to the defined distance, installing web cameras and demining the village and adjacent areas by the Ukrainian military. However it’s only possible if militants implement all conditions required by the demilitarization plan,” Col. Motuzyanyk said.

The city of Avdiivka has become the epicenter of fighting in Donetsk region, with militants frequently employing mortars and the artillery. Militants are also active in northern and western outskirts of Horlivka. In the Luhansk region, militants are concentrating their activities on Shchastya, Krymske and Sokilnyky. Colonel Motuzyanyk commented that use of high-caliber weapons and armored vehicles by the militants has not been observed in these areas.

One Ukrainian serviceman was killed in action and three more were wounded in the last 24 hours.

Colonel Motuzyanyk also said that 15,126 people had been forced to leave frontline towns since the end of January either independently or assisted by the State Emergency Service of Ukraine, with government authorities currently giving shelter to more than 15,000 people.