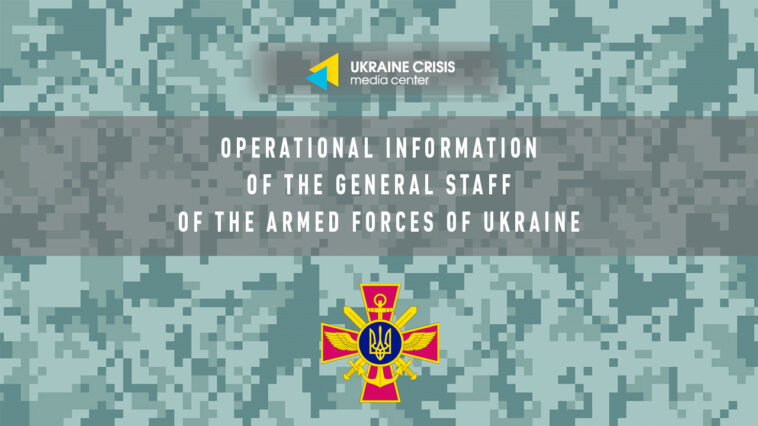 General Staff of the Armed Forces of Ukraine: The twenty-second day of the heroic resistance of the Ukrainian people to the russian military invasion continues.

russian occupation forces continue offensive operation against Ukraine. The strategic goals of defeating groups of the Armed Forces of Ukraine, reaching the administrative borders of Donetsk and Luhansk oblasts, and establishing control over the left-bank part of Ukraine have not been met.

The Command of the Armed Forces of the russian federation continues to take measures to make up for the loss of personnel at the expense of foreigners. According to available information, the russian occupiers have already picked up close1,000 volunteers from the so-called army of Bashar al-Assad and Hezbollah.

The main requirement for foreign fighters is the experience of fighting in the city. At the same time, according to available information, the above-mentioned militants do not intend to take part in hostilities on the territory of Ukraine, but to use “business trips” as opportunities to get to European countries.

The enemy did not carry out offensive operations in the Volyn direction. He continued to strengthen the protection of the Ukrainian-Belarusian border by units of the Armed Forces of the Republic of Belarus. There is a high probability of provocations by the special services of the russian federation.The enemy did not carry out active offensive operations in the Polissya direction, the main efforts of the occupiers were focused on maintaining the previously occupied borders and carrying out measures to prepare for a possible attack on Kyiv. At the same time, the losses inflicted on the occupiers by Ukrainian defenders, the low moral and psychological condition of privates and sergeants, as well as the lack of experienced commanders of tactical units make it impossible to resume offensive operations in the near future.

In the northern direction, the enemy is trying to stay on certain borders, restore the combat capability of units and replenish supplies. The occupiers continue to partially blockade the city of Chernihiv and carry out artillery shelling of the city.

In the direction of Brovary, the enemy did not conduct active hostilities.

In the area of ​​the city of Brovary, the occupiers periodically carry out artillery shelling of the positions of the Armed Forces of Ukraine.

In the Slobozhansky direction, in order to resume offensive operations on the cities of Sumy and Kharkiv, the occupiers are trying to replenish stocks of ammunition and fuel and oil and are forced to use the accumulated human reserves prematurely.

In the direction of the city of Izyum, the enemy is trying to resume offensive operations.

In the Luhansk and Donetsk directions, the enemy focused its main efforts on preparing for the attack on Severodonetsk and the encirclement of Mariupol.

The enemy did not take active action in the Pivdennobuzsky direction. He moved on to the defense and engineering of the occupied frontiers. He tried to regroup and replenish stocks.

The occupiers continue to try to detect and destroy the air defense system along the Black Sea coast.

In the Black Sea, the enemy is trying to conduct demonstrations.