Kyiv, June 4, 2015. OSCE Special Monitoring Mission reported the movement of militants’ military equipment from Donetsk toward Maryinka in the night of June 2-3:  10 T-64 and T-72 tanks, 122-mm and 152-mm heavy artillery and trucks carrying anti-aircraft mounts were spotted. “International monitors also observed incessant artillery fire on the militants part between 4:30 a.m. and 8 a.m.,” said Colonel Lysenko, spokesman of the Administration of the President of Ukraine on ATO related issued, at the press briefing at Ukraine Crisis Media Center. 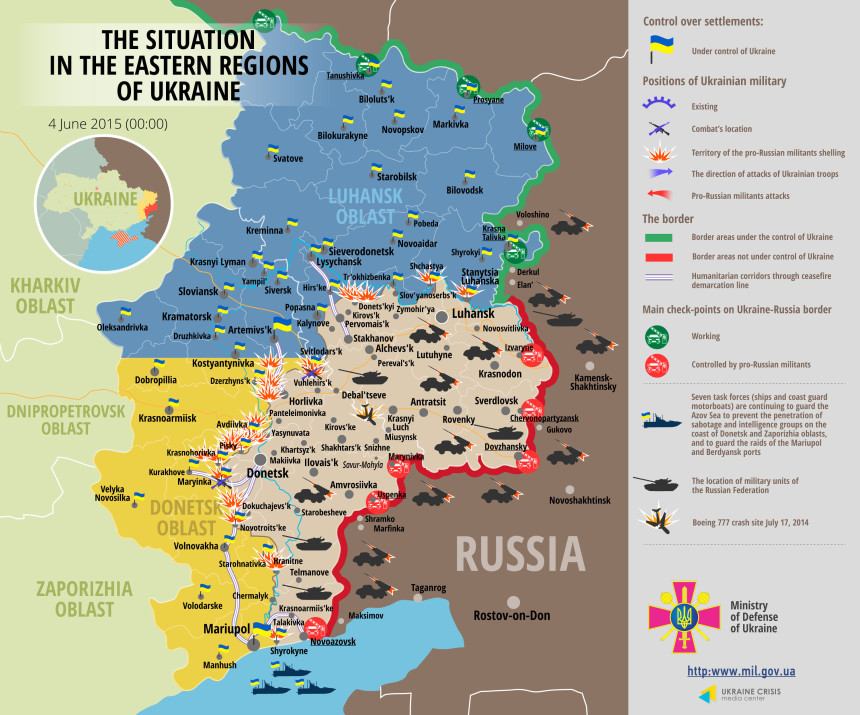 Russia-backed militants lost 80 fighters, while over 100 were left wounded as a result of fighting near Maryinka; 10 armored vehicles were destroyed as well.

Most intense fighting took place in the northwestern outskirts of Maryinka, areas around the Donetsk airport and by Svitlodarsk. Pro-Russian militants used large-caliber artillery, 120-mm mortars and tanks, as well as fired from “Grad” missile systems 11 times.

Col. Lysenko noted the ATO Command informed Ukraine’s international partners the Ukrainian Armed Forces resolved to use heavy artillery in order to safeguard the lives of their troops and civilians.

Two civilians have been killed and five got wounded as a result of militant shelling of Maryinka.

Two civilians were killed due to the landmine explosion in vicinity of Katerynivka. According to Col. Lysenko, militant subversive-reconnaissance group is suspected in committing this crime. “When examining the site of the tragedy law enforcers discovered subversives’ masked position, mines and other explosive devices and special cords,” he said.

Five Ukrainian servicemen were killed in action and 38 got wounded in the last 24 hours.

One servicemen of the National Guard was liberated after nine months in militant captivity.