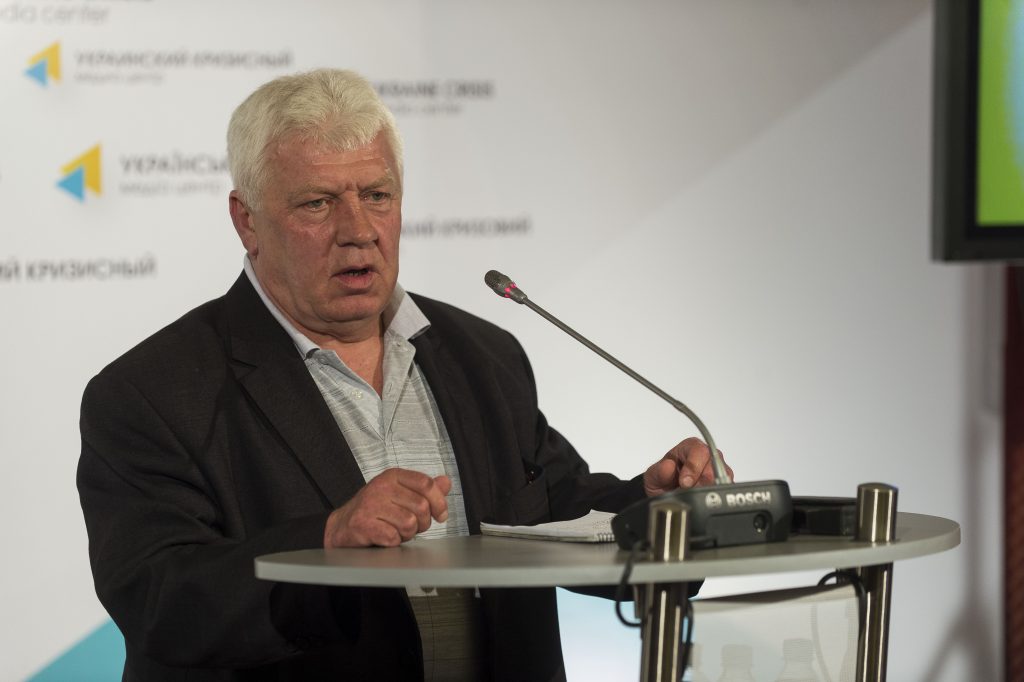 Kyiv, May 14, 2014 – Despite the separatists and pro-Russian forces got active in Ukraine’s eastern regions, miners do not yield to provocations and continue to defend their mines and work places. This was reported by Mykola Volynko, the Chairman of miners’ trade union of Donbass, during the press-briefing at the Ukraine Crisis Media Centre. At the same time he urged the Ukrainian authorities to take more active actions to protect Donbass, solve the conflict and effectuate the region’s full return to Ukraine. “Everybody understands that Donbass is Ukraine. Federalization, or unification with Russia will kill the Ukrainian mines and leave the Ukrainian miners jobless”, – he stressed.

According to Mr.Volynko, separatists in the region are trying today to obstruct the functioning of mines by not letting the buses with workers and manned shifts go to objects. “Such was the recent situation at the mine named after Kalinin in Donetsk and it is now happening at many other mines. However, workers say they will work as they need to feed their families. For now we have exercised silent resistance: they do not let miners pass – miners go round about to work. And the great majority of the heads of mines support the functioning of mines”, – he said.

The expert noted strong propaganda in the region by the pro-Russian separatist forces. “They threaten with the right sector and banderivtsi. And they immediately call people, who ask sensible questions on how we will live, provocateurs. Our organisation goes a lot to mines; we explain and admonish: if mines stop, that will be the end. Who will transfer the state aid? What will happen to pensioners and most importantly to the mines themselves? Russia has enough of its own unemployed miners. Only 3 mines remained in Rostov region out of 64. Those remained in Tula region are also very few. At the meeting in Novokuznetsk people openly said to me: we have enough of our own unemployed, why should we need your Ukrainian ones? This will only result in our wages getting even lower”.

At the same time Mr.Volynko reproached the Ukrainian government for the fact that the anti-terrorist operation had already lasted stage by stage for one month and that it might go on. “Today the miners are tired of tolerating disorder and abuse of law. People want peace and quiet to come as soon as possible”, – he said.

The expert is convinced that the Ukrainian government should undertake complex actions and not limit itself to just military ones. Among the awareness-rising actions he sees appropriate to tell more to the population about the examples of a territory’s decline as a result of Russia’s intervention (such as Abkhazia). From the economic perspective it is necessary to work out a vision of the region’s development. Currently, given the incentives for coal import granted by the previous government at the end of 2013, he urged the current state officials to definitely decide how to protect the domestic producer. “We have coal, electricity and metal. But where to further sell that? We have underneath us 13 billion of explored gas reserves of methane. Thus, we need to make efforts to use them”, – summarised Mr.Volynko.