Kyiv, June 12, 2015 – Ukrainian representatives to the Joint Center for Control and Coordination (JCCC) of ceasefire notified the OSCE mission members about night attacks at Horlivka that were carried out by Russian and separatists troops jointly.

“On June 10 militants shelled western outskirts of Horlivka from the side of Gagarina mine using 120-mm mortars. There are civilian casualties” – said Colonel Andriy Lysenko, spokesman of Administration of the President of Ukraine on the issues of the ATO. The Ukrainian Armed Forces delivered intelligence about he shooting incident and the coordinates of enemy’s positions. 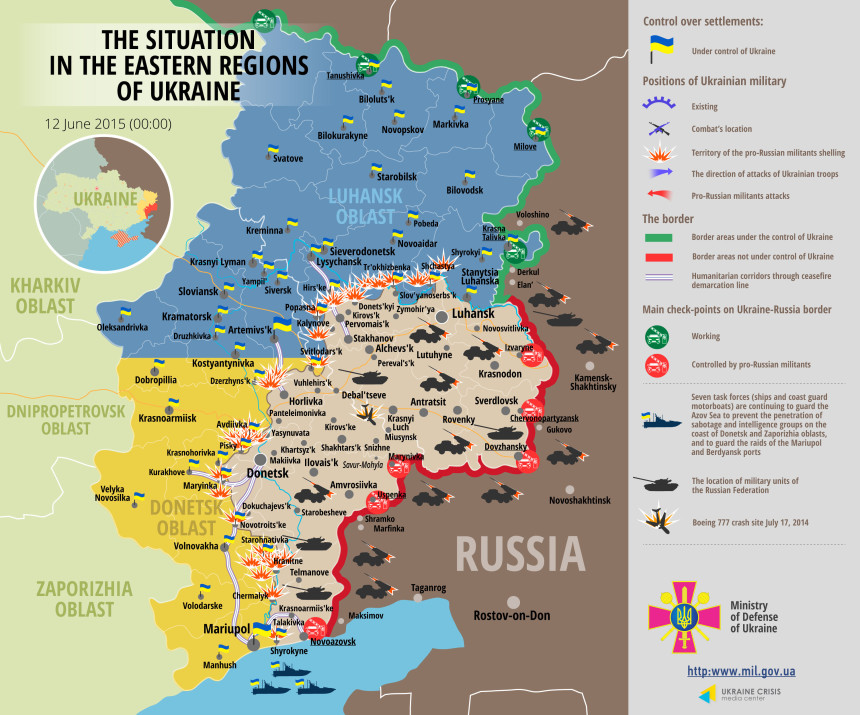 Additionally, in the Donetsk area active fighting took place near the airport.

In the Luhansk area enemy was attacking the ATO positions on a wide range of frontline – from Popasna to the Russian border. According to the ATO spokesperson, separatists are using small arms and mortars. No action from large-caliber artillery or tanks was noted. Militants are regularly instigating provocations near Krymske and Sokilnyky villages.

The Mariupol area was largely peaceful on June 11th. Russia-backed militants attached the ATO forces with 152-mm cannons and mortars in the area of Pavlopil water basin.

Yesterday, the Ukrainian Armed Forces incurred no lethal casualties however 10 servicemen were wounded in action.

It has to be noted that the construction of fortifications in the ATO zone is being finalized.

“A total of 300 fortifications are planned to be constructed. 100 of them are completed by now,” – added Andriy Lysenko.