Kyiv, June 16, 2015. Russia-backed militants have continues to use heavy weapons against the Ukrainian Armed Forces along the entire frontline. In the Mariupol sector, attacks intensified near Shyrokyne where militants fired from large-caliber mortars and artillery. In the Donetsk sector, pro-Russian fighters targeted Ukrainian military position near Maryinka, having launched two salvos from “Grad” multiple rocket launchers. “Active combat actions are being conducted in a wide area on the frontline – from Hranitne to Horlivka where the enemy used heavy armored vehicles,” said Colonel Andriy Lysenko, spokesman of the Administration of the President of Ukraine, at the press briefing at Ukraine Crisis Media Center. 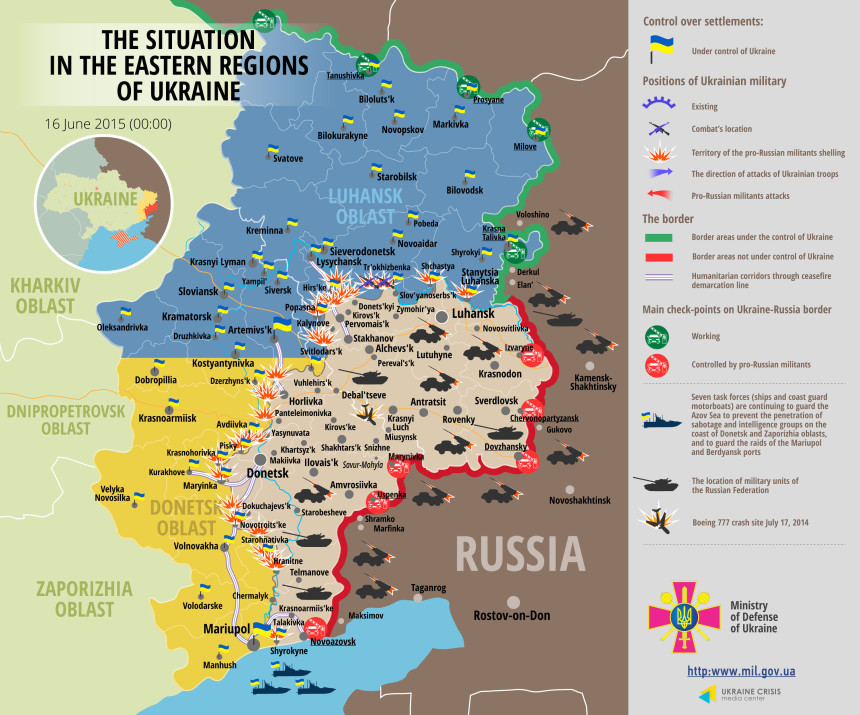 In the Luhansk sector, most intense combat actions occurred in the area of Novotoshkivske village that was fired upon with 122-mm artillery. “There was a combat engagement with an enemy subversive-reconnaissance group in the Sokilnyky-Kryakivka-Tryokhizbenka triangle. At the same time militants used tactics of harassing fire close to Popasna, Shchastya and Stanytsia Luhanska,” Col. Lysenko added.

Two Ukrainian servicemen were killed in action and five more got wounded in the last 24 hours.

Ukrainian intelligence reported that active Russian servicemen are going to occupy key posts in the military administration, which are going to be created on the militant-controlled territories in order to control and direct Russian proxy forces of the so-called “DPR” and “LPR” as well as to address systematic stealing of the humanitarian aid by the militant leaders.

According to Col. Andriy Lysenko, Ukraine’s security services discovered a hidden arms arsenal in the ATO zone, namely 20 boxes with ammunition was seized near Dokuchayevsk along the Mariupol – Donetsk highway: “Several dozens of 152-mm artillery projectiles pieces were seized. The ammunition was passed to the Ukrainian Armed Forces.”