Kyiv, June 17, 2015. Number of Russia-backed militant attacks on the Ukrainian troops has decreased yesterday. Ukrainian Armed Forces did not suffer any lethal casualties, said Colonel Andriy Lysenko, spokesman of the Administration of the President of Ukraine on ATO related issues, at the press briefing at Ukraine Crisis Media Center. “However, the enemy does not stop using heavy weapons including large-caliber artillery, mortars and armored vehicles,” Col. Lysenko added. 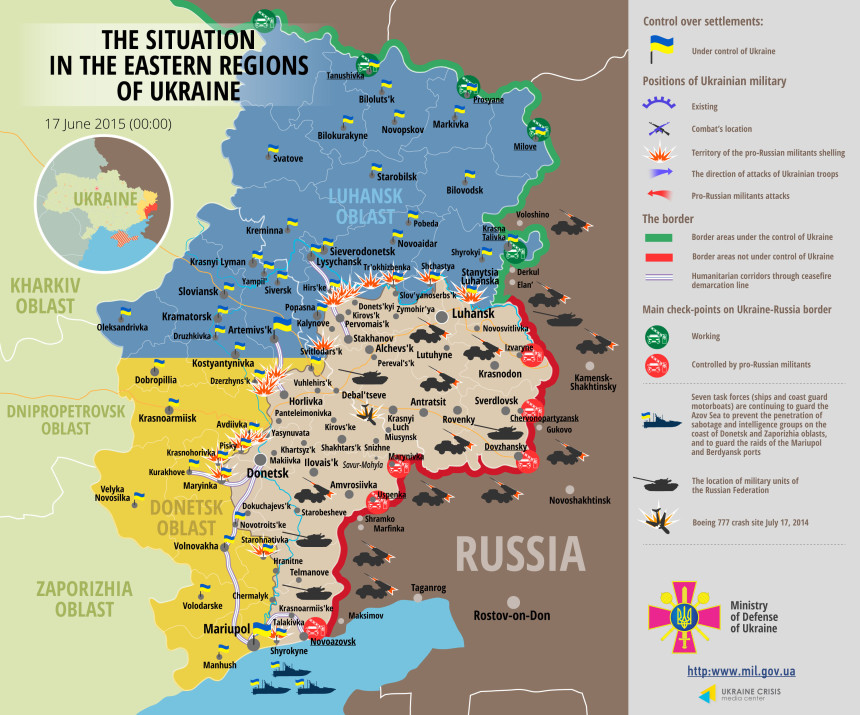 In the Mariupol sector, Shyrokyne remains the only spot of engagement where militants opened fire at the Ukrainian forces from small arms and later shelled them from mortars and artillery. Areas around the airport, Maryinka and Krasnohorivka were the hotspots in the Donetsk sector. Enemy snipers were active in vicinity of Spartak village. Isolated armed provocations also occurred in the outskirts of Horlivka where militants used mortars and small arms. In the Luhansk sector, fighting has been observed near Krymske; militants used an IFV and 120-mm mortars.

Six Ukrainian servicemen were wounded in action in the last 24 hours.

Col. Lysenko noted that a district court in Pavlohrad, Dnipropetrovsk region, found former staff worker of Selidove penal colony guilty of cooperation with pro-Russian militants, sentencing him to eight years in prison. Col. Lysenko commented: “Ukraine’s Security Service operatives detained the criminal last February. He was recruited by a “DPR” militant and was providing militants intelligence on the location of equipment and the number of the Ukrainian troops. Militants used this information to shell the Ukrainian military positions from the artillery.”

Ukrainian law enforcers stopped an attempt to smuggle goods from Ukraine. Col Lysenko reported that the smugglers tried to get components that could be used to produce Russian T-90 tanks as well as aviation and space equipment to Russia.

Second part of joint Ukrainian-American military training “Fearless Guardian – 2015” launched yesterday. The training aims at improving the level of combat and special skills of the National Guard of Ukraine servicemen according to NATO standards.