Kyiv, June 18, 2015. Following a brief period of silence, combat actions escalated in eastern Ukraine. In the Mariupol sector, Russia-backed militants fired at the Ukrainian military positions based in Shyrokyne from 122-mm artillery and small arms. In the Donetsk sector, there were two combat engagements between Ukrainian Armed Forces and militant groups – 30 and 150 militants each – in the area of Maryinka with use of mortars and small arms. “Although Ukrainian servicemen repelled all attacks, the city was shelled with heavy weapons all day long. Militants also actively fired at the area of Krasnohorivka and of the airport,” said Colonel Andriy Lysenko, spokesman of the Administration of the President of Ukraine on ATO related issues, at the press briefing at Ukraine Crisis Media Center.

In the Luhansk sector, militants shelled Ukrainian troops in the area of Popasna and Tryokhizbenka from “Grad” multiple rocket launchers and 152-mm artillery. Militants have also used the heavy artillery on the Bakhmutska road near Orikhove and Novotoshkivske. “Late at night there was a combat engagement near Sokilnyky with an enemy subversive-reconnaissance group that had arrived from southeastern direction,” Col. Lysenko added. 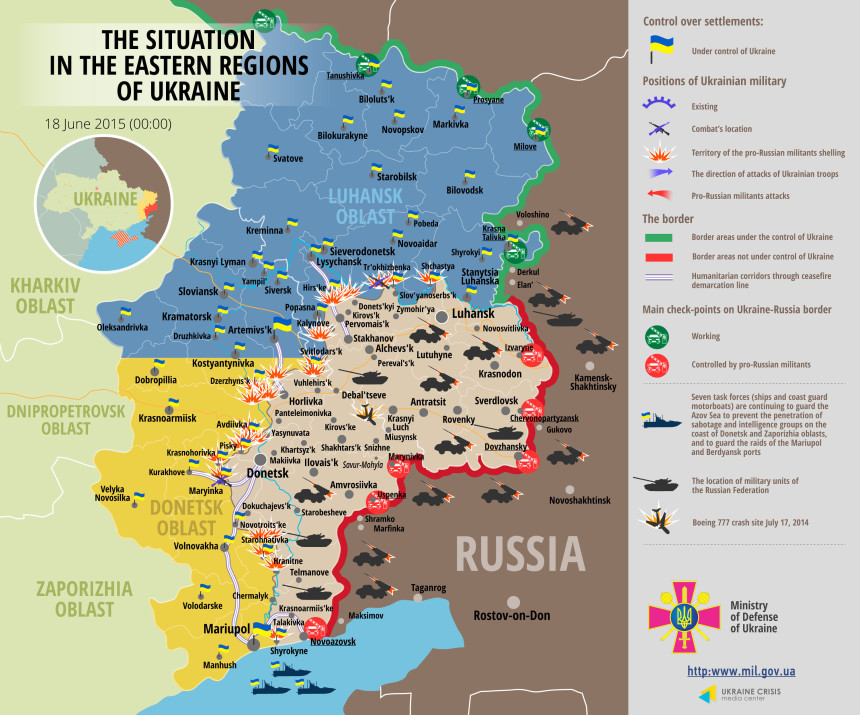 Three Ukrainian servicemen were killed in action and 14 more got wounded in the last 24 hours.

Col. Andriy Lysenko said that a resident of Novotoshkivske, Luhansk region, was injured as a result of mine explosion yesterday. It is suspected that pro-Russian militants have planted the mine. The wounded was taken to the Lysychansk hospital. At night from June 16 to 17 two civilians got wounded due to the militant shelling of Maryinka, Donetsk region. “They are recuperating in the hospitals of Vuhledar and Kurakhove,” said Andriy Lysenko.

Ukraine’s Security Service of Odesa region blocked an attempt of activities of the so-called “People’s Council of Bessarabia” designed by the Russian intelligence. “One of the detained – a citizen of Ukraine was supposed to be presented in public as the leader of this fake group and to later disappear to blame his disappearance on the Ukrainian security services. Over 500 copies of Russian propaganda materials, IT equipment, flash drives with texts of the so-called “constitution” and “manifest” of yet another artificial Russian-backed formation were confiscated,” Col. Lysenko said.

Ukrainian law enforcers detained a female militant fire spotter, nom-de-guerre “Malaya”, resident of Myronivske, Donetsk region. She has been collecting information on location, number and types of military equipment of Ukrainian Armed Forces in towns near Debaltseve for the last four months. Militants used this information to shell Ukrainian positions. The woman confessed and gave a detailed testimony on her cooperation with pro-Russian fighters.