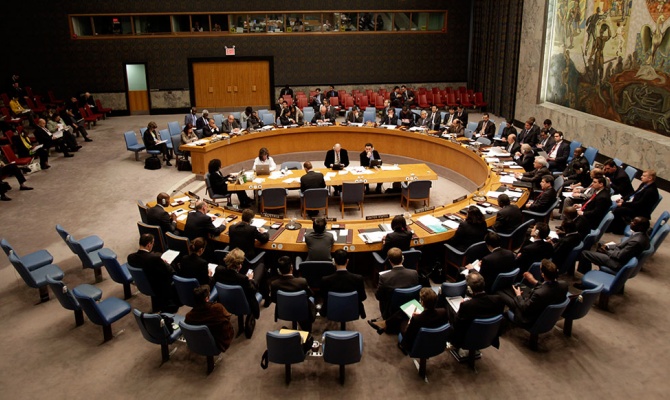 Kyiv, May 8, 2014. Today, a team of international lawyers will present their report, Crisis in Ukraine: Its Legal Dimensions and recommendations on the ongoing crisis and armed conflict in Ukraine at the United Nations Headquarters in New York. Prepared for Razom, a Ukrainian-American human rights organization, the well-documented 76-page report covers all the critical legal aspects of the conflict: legal conclusions on Eastern Ukraine, annexation of Crimea, Budapest Memorandum on international security guarantees, and human rights and humanitarian law at issue.

“The Crisis in Ukraine: Its Legal Dimensions” Report Released

The detailed report, with exhaustive citations, covers the right of secession, crimes of aggression, critical energy security issues, sanctions imposed to date, and military law. “This is a must-read report for policymakers. It spells out, in one place, the law you need to know to understand the crisis,” commented Razom General Counsel Ivanna Bilych. Lidiya Dukhovich, Esq., Director of the Institute of Modern Russia, added, that “armed conflict between Russia and Ukraine is a tragedy. The report explains the legal stakes, but no report can explain adequately the terrifying human stakes for both Russia and Ukraine.”

In case of Russian troops crossing into Eastern Ukraine, the international community is recommended to condemn such action and consider appropriate countermeasures. It should also provide training, capacity building and other civilian support to the Ukrainian government.

At the same time Russia is reasonably called to pursue negotiations directly with Ukraine to find a political, non-violent resolution to the crisis. The aggressor is further advised to withdraw its troops from Crimea and from the Eastern Ukrainian border, and to prevent the creation of any further frozen conflicts.

Among recommendations for Ukraine, the authors see fit for Kyiv to bring claims against Russia in the European Court of Human Rights on a wide range of human rights violations (unauthorized use of force, unauthorized annexation of Crimea, violation of indigenous people’s rights, and Ukrainian citizens’ voting rights, etc).

The international team prepared their Report as pro bono service while studying at NYU School of Law.