Kyiv, June 22, 2015. Active fighting in the Mariupol sector occurred in the area of Shyrokyne and Berdyanske where militant groups used 122-mm artillery as well as enemy snipers were active. In the Donetsk sector, militants were actively using heavy weapons, tanks and large-caliber artillery. The epicenter of the conflict was the area of the Donetsk airport, Spartak and residential areas of Donetsk. “In the airport area, according to the Joint Center on Control and Coordination, pro-Russian fighters fired 28 times on June 16, 37 times on June 17, 41 times on June 18, 45 times on June 19 and 53 times on June 20. Additionally there was a series of skirmishes in the area of Horlivka; Ukrainian military positions came under artillery shelling along the entire perimeter of the occupied city,” said Colonel Andriy Lysenko, ATO spokesman of the Administration of the President of Ukraine on ATO related issues, at the press briefing at Ukraine Crisis Media Center. 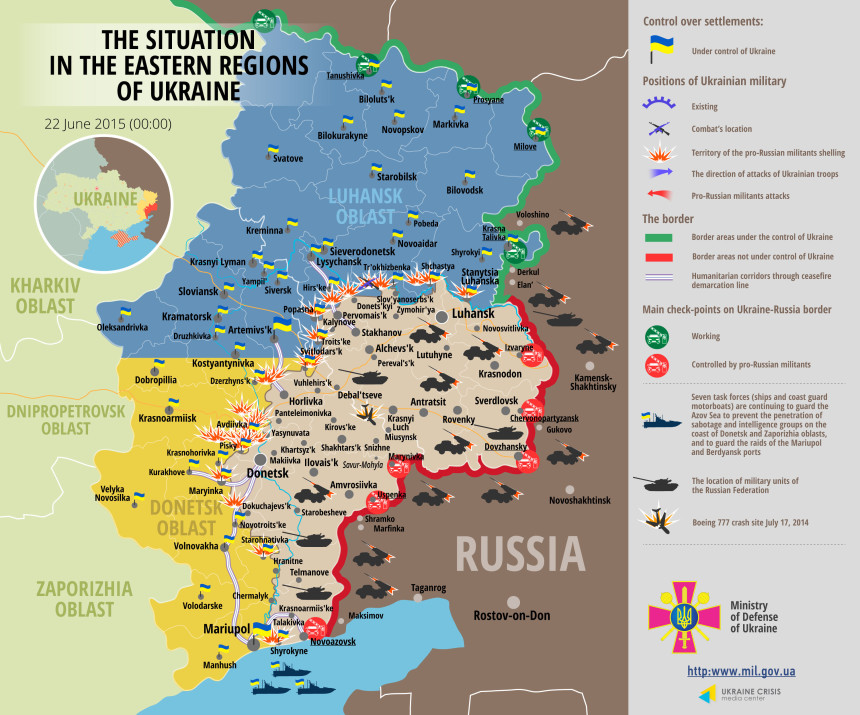 In the Luhansk sector, military action has happened between Novotoshkivske and Sokilnyky. “Militants shelled Ukrainian positions and residential areas during the night. The enemy has also conducted a series of mortar attacks in the vicinity of Stanytsia Luhanska,” Col. Lysenko said.

Ukrainian border guards spotted eight flights of enemy UAVs in yesterday, one more was spotted in the rear between Berdyansk and Mariupol.

Two Ukrainian servicemen were killed in action, three more got wounded in the last 24 hours.

According to Andriy Lysenko, Russia-backed militant subversive group blasted a motorway bridge across the Luhan River in Troyitske. No one got injured as a result of explosion.

Col. Lysenko concluded with the news that the EU Council extended economic sanctions imposed on Russia until January 31, 2016.