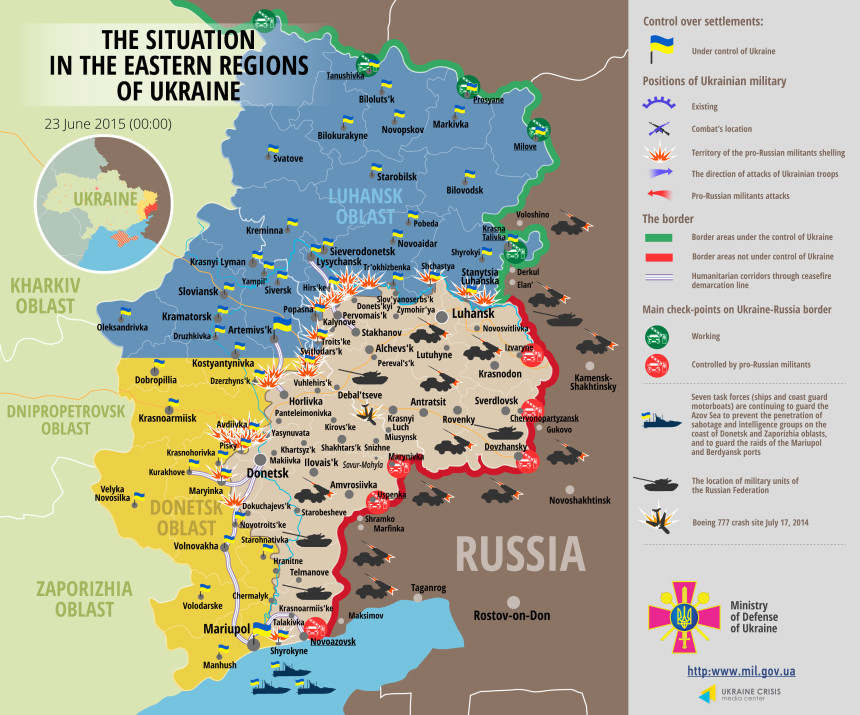 Russia-backed militants intensified combat actions in the Luhansk sector, shelling the village of Nyzhne, 10 km away from the frontline, from Grad multiple rocket launchers. The villages of Troyitske, Zolote and Novotoshkivske, Bolotene and Stanytsia Luhanska have also came under militant mortar and artillery shelling. “The enemy concentrated artillery pieces and mortars in Pervomaysk, Slovyanoserbsk, Vesela Hora villages and near the monument to Prince Ihor located by the Luhansk – Stanytsia Luhanska road,” Col. Lysenko added.

In the Mariupol sector, only one case of ceasefire violation was registered in Shyrokyne village. Col. Lysenko quoted the Ukrainian intelligence, telling that the enemy is moving heavy equipment from the Sea of Azov to other sections of the front.

In the Donetsk sector, incessant fighting continued in the airport area. Active tanks use has been recorded near Pisky and Opytne. Pro-Russian fighters also shelled Yasnobrodivka and Pervomayske villages located far from the combat line from 122-mm artillery, as well as continue provocations outskirts of Horlivka in the area of Lozove village where Ukrainian military positions were heavily shelled from 152-mm cannons.

One Ukrainian serviceman was killed in action and 12 got wounded in the last 24 hours.

Economic situation in the militant-occupied territories deteriorates. “According to our information, the militart who have occupied Luhansk are planning to cut around 60% of miners. Around 800 persons are planned to be fired at the enterprises of Lutuhynsky district, 1,000 workers in Slovyanoserbsky and Perevalsky districts, up to 5,500 workers in Krasny Luch and neighboring miner towns are all going to be out of jobs,” said ATO spokesman.

Ukrainian intelligence registered the raising discontent among the militants. Main reasons for the decrease of morale are payment delays and the lack of military equipment such as thermal imagery devices, night vision goggles, etc.