Kyiv, June 24, 2015. Ukrainian border guards have observed three Russian Su-25 jets flying along the administrative line between the Kherson region and Russia-occupied Crimea. “A Russian helicopter was seen flying along the Ukrainian-Russian border near Ukraine’s Chernihiv region,” said Colonel Andriy Lysenko, spokesman of the Administration of the President of Ukraine on ATO related issues, at the press briefing at Ukraine Crisis Media Center. 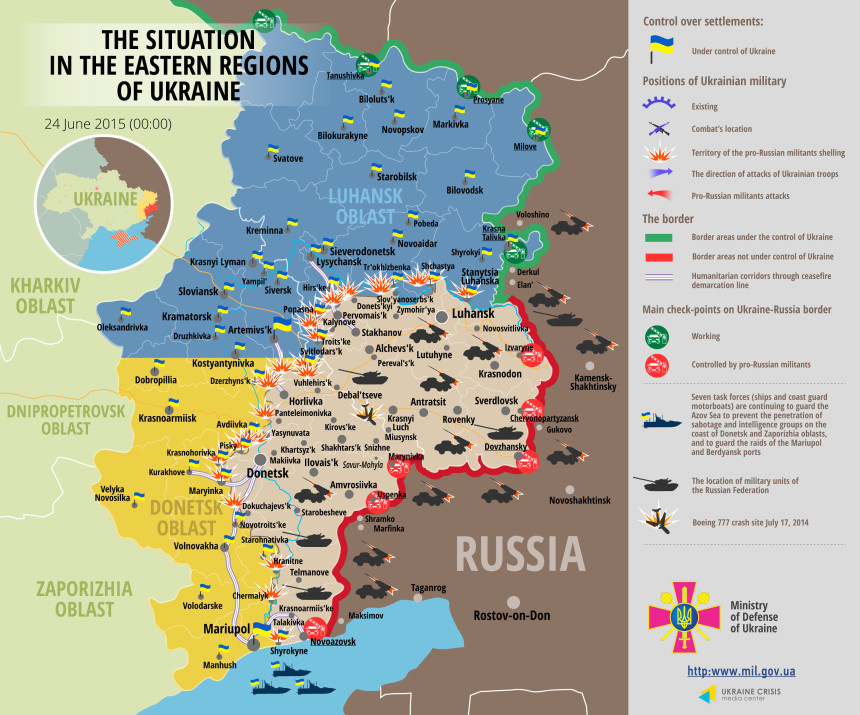 In the Donetsk sector, Russia-backed militants attack mostly outside of Opytne, Maryinka and in Pisky, use 120-mm mortars; enemy snipers are active as well. “There were no cases of the militant’s use of large-caliber artillery use yesterday,” added Colonel Lysenko. Militants have also instigated a series of armed provocations in the outskirts of Horlivka, namely in Leninske, Kirove, Svitlodarsk and Lozove.

In the Mariupol sector, pro-Russian fighters reserved to the tactics of harassing fire from small arms and mortars at Shyrokyne and Chermalyk.

In the Luhansk sector, Novotoshkivske village was mortared and shelled from 152-mm howitzers. “Artillery attacks continue close to Popasna and Zolote too as the enemy keeps firing at our positions from Pervomaysk and Kalynivka. Militants also mortared Shchastya and Stanytsia Luhanska in the second half of the day,” Col. Lysenko said.

Ukrainian Forces did not incur any lethal casualties; four servicemen got wounded in action in the last 24 hours.

Ukraine’s Security Service detained a turncoat policeman who has collaborated with the so-called “DPR” and gather intelligence on the positions and weapons that Ukrainian troops had in the region. Last May he coordinated the retreat of enemy subversive-reconnaissance group after it has committed a terrorist act in the city.

Ukrainian operatives detained three more Russia-backed militants; one of them – a right-hand man of a field commander from the so-called “Ministry for state security of “DPR” – was detained in Mariupol. “This militant group organizes explosions in places of mass gathering as well as terrorist acts targeting Ukrainian authorities and servicemen. He has organized transportation of weapons and explosives to Mariupol,” Col. Lysenko said. A second detainee confessed he had been trained by Russian military instructors. The third detained militant also confirmed that newly recruited militants are trained by Russian regulars in an abandoned resort in Novoazovsk. The militant directly participated in military action outside Mariupol, as well as fired from Russian mortars and participated the battle for Debaltseve.