Kyiv, June 26, 2015. Russia-backed militants have shelled Ukrainian military positions in the vicinity of Shchastya, Luhansk region. Two civilians got injured as a result of the militant’s mortar attack. Militants also instigated armed provocations in Popasna, Novotoshkivske and Stanytsia Luhanska, said Colonel Andriy Lysenko, spokesman of the Administration of the President of Ukraine on ATO related issues, at the press briefing at Ukraine Crisis Media Center. 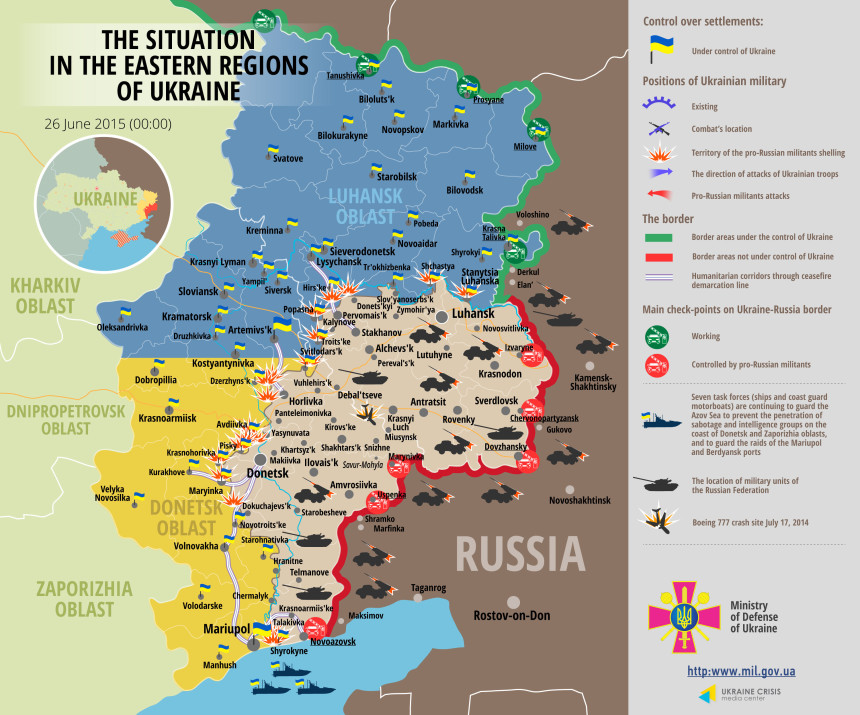 In the Mariupol sector, fighting continued in Shyrokyne. Militants use a wide array of weapons including “Grad-P” reactive artillery systems; enemy snipers have been active as well.

In the Donetsk sector, incessant skirmishes occurred in the airport area and Maryinka. The situation near Horlivka was relatively stable. No cases of heavy arms use were observed.

One Ukrainian serviceman was killed in action and three got wounded in action in the last 24 hours.

Col. Lysenko commented on the rising social unrest in the militant-controlled territories: “Two days ago residents of Dokuchayevsk took to the streets, protesting against the war and a terrible crime when one of the militants shot a peaceful civilian in the head. City dwellers also demanded to stop firing at the positions of the Ukrainian Armed Forces from residential blocks,” said Andriy Lysenko.

Furthermore, residents of western areas of militant-controlled Donetsk demanded to stop placing heavy equipment and manpower in residential blocks as it poses a threat to lives of civilians.

Meanwhile Ukrainian volunteers delivered 3,000 euro worth of humanitarian aid donated by the Swiss charity organizations to the field hospitals located at the frontline.

Ukraine’s Security Service detained two “DPR” informers who were recruited by the Russian GRU [Main Intelligence Directorate] operative nicknamed “Starshyna”. Detained informers confessed that the Russian officer coordinates activities of subversive groups of the so-called “DPR” in charge of the intelligence network made up from the residents of Donetsk, Vinnytsia and Lviv regions.

Ukrainian operatives seized elements of UAV designated for the “LPR” field commander based in Pervomaysk. Col. Lysenko noted that militants have planned to build a drone capable of carrying up to 100 kg of explosives to conduct terrorist attacks.

Policemen of the Donetsk region in Avdiivka uncovered an arms cache with four anti-tank grenade launchers, 20 RGD-5 grenades and 120 rounds for automatic weapons. Also, 12 grenades and over 100 ammunition rounds were seized in Kirove village during the search of a private house.