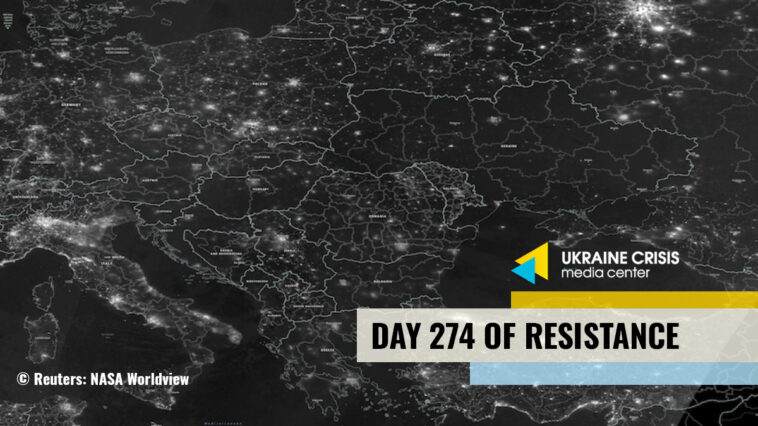 Russia openly blackmails Ukraine: agree to our demands to end the attacks

Kremlin spokesperson Dmitry Peskov openly stated that Ukraine must cede to Russia’s demands to “bring the situation back to normal”. “The leadership of Ukraine has every opportunity to bring the situation back to normal, has every opportunity to resolve the situation in such a way as to fulfill the requirements of the Russian side and, accordingly, stop all possible suffering of the civilian population,” Peskov said Thursday, as quoted by Russian state news agency RIA Novosti. Russia earlier admitted that power and heat outages across Ukraine are consequences of the Ukrainian government’s reluctance to enter peace talks.

It said it restarted supplies to critical infrastructure in all regions where its specialists are present, including to hospitals and water pumping stations.

“We are restoring power to residential customers,” DTEK said. “Having no chances to win against the Ukrainian army on the battlefield, the [Russian] barbarians terrorize civilians.”

“The Ukrainian energy system withstood [the attacks]. The Russian terrorists wanted to leave us with no power, but failed. They will never achieve that. The energy system will stabilize in the coming hours.”

“The energy workers withstood a tough battle against an insidious and unscrupulous enemy,” the company said in a statement.

EU did not agree to cap price of Russian gas

EU energy ministers did not agree to cap price of Russian gas and will reconvene for another emergency meeting in December, Politico said.

Ministers gathered in Brussels for Thursday’s Energy Council reached an informal agreement on the less controversial elements of the Commission’s energy crisis package, but did not agree on a way forward on the so-called Market Correction Mechanism, four diplomats quoted by Politico said.

An alliance of countries most vehemently opposed to the Commission’s proposal — Belgium, Spain, Italy, Poland and Greece — made clear that they would not formally agree to the wider package until the gas price cap issue had been resolved, two diplomats said.

That will require another extraordinary Energy Council, which three diplomats said, was earmarked for December 13 — allowing any agreement to be signed off by EU leaders meeting on December 15 and 16.

The Commission’s proposed Market Correction Mechanism involved a cap on the price of month-ahead trades at the main EU trading point the TTF, but only when prices exceed EUR 275 per megawatt hour for two weeks and those prices are EUR 58 above the global liquefied natural gas price for 10 days, Politico said.

The European Union is pressing ahead with a ninth sanctions package on Russia in response to Russia’s invasion of Ukraine, European Commission chief Ursula von der Leyen said during a visit to Finland on Thursday.

“The EU is working hard to hit Russia where it hurts to blunt even further its capacity to wage war on Ukraine,” von der Leyen told a news conference.

“I’m confident that we will very soon approve a global price cap on Russian oil with the G7 and other major partners,” she said.

The President of the European Commission earlier condemned Russia’s strikes on Ukraine’s energy infrastructure. She also said that the EU is preparing a ninth round of sanctions and an oil price cap to make it difficult for Putin to finance the war.

The European Commission plans to present a ninth package of sanctions against Russian in late November and possibly agree on it in the beginning of December, unofficial reports say.

The EU will ban Russian crude oil imports from December 5, and Russian oil products from February 5 to strip Russia of its largest source of income to finance the war.

Does Serbia support Russia’s war in Ukraine? Ukraine in Flames #259