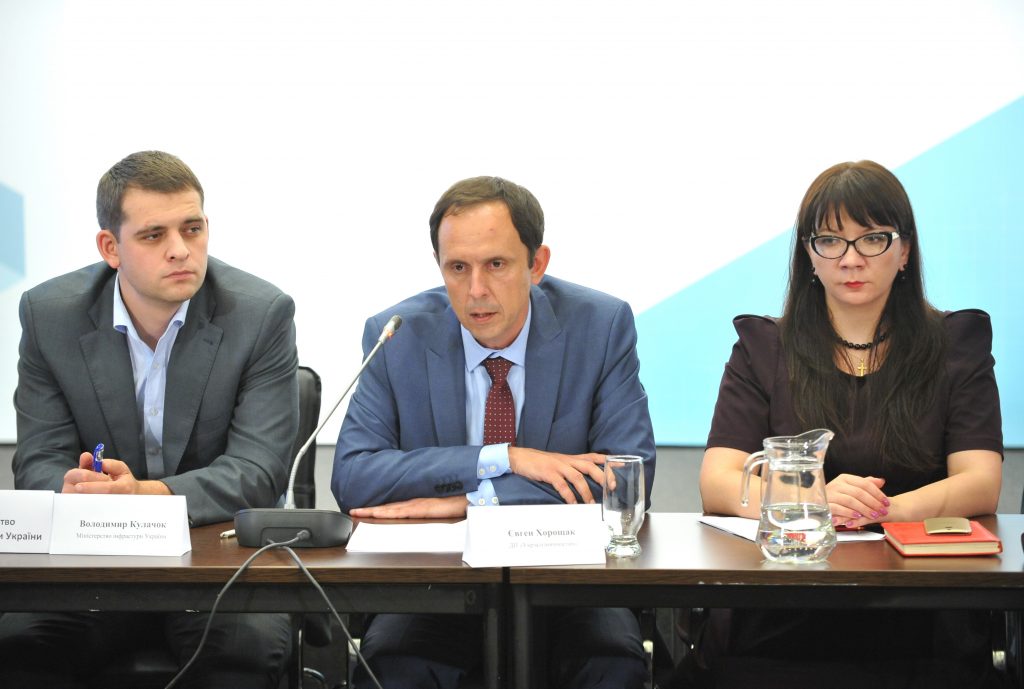 Kyiv, July 1, 2015. “Formula pricing will provide an uninterrupted diesel fuel supply to the railway,” stated Acting Director General of the state enterprise Ukrzaliznychpostach, Yevhen Khoroshchak during a roundtable discussion on formula pricing for state procurement of fuel at Ukraine Crisis Media Center. Representatives from the Ministry of Infrastructure, the Ministry of Economic Development and Trade, the Antimonopoly Committee of Ukraine, petroleum industry experts and journalists participated in the discussion. Currently, the Ukrainian Government receives a fixed fuel price.

Event participants discussed the problems and prospects of a new system that would rely on the Platts European Market Scan currency exchange rates and pricing markers. Khoroshchak emphasized the necessity of an uninterrupted diesel fuel supply with a guaranteed pricing formula for sustainable rail infrastructure. “Formula pricing, which is a standard mechanism in petroleum markets will provide SE Ukrzaliznychpostach—the biggest diesel fuel consumer in Ukraine—the ability to purchase fuel at fair, transparent prices. Formula-based pricing will enhance market competition in the petroleum market and favor the formation of economic fuel prices.”

Ministry officials at the roundtable expressed support for Ukrzaliznychpostach’s position. Volodymyr Kulachok, head of the Ukrainian Economic Analysis Department for rail transport stressed the importance of a steady fuel supply in sustainable rail infrastructure. “Despite the fact that electric transportation prevails at the moment, the 11 percent of Ukrainian Railway Company trains that run on diesel fuel are extremely important in terms of all-Ukrainian transportation. A comprehensible pricing formula satisfying both the consumer and the supplier will eliminate the risk of railway transportation cessation caused by fuel supply problems,” said Kulachok.

“The Ministry of Economics is ready to support formula pricing for diesel fuel. Presently, we need to finalize this formula,” said Anna Tovkay from the Department of Regulation for State Procurement at the Ministry of Economic Development and Trade. She added that Ukrainian legislation on pricing regulation is a key factor in formula mechanism pricing. According to Tovkay, Verkhovna Rada took recent steps toward such legislation by passing a draft of law Number 2087а, titled “On making changes to some laws of Ukraine in the state procurement sphere to bring them in line with international standards and taking anti-corruption measures.” This bill takes into consideration Ukrzaliznychpostach’s proposals to use the Platts indices.

Responding to a question on how the formula would make the procurement process more transparent, Khoroshchak said, “The basic components of the formula—Platts indices, currency exchange rates and excise duty for fuel—are transparent and objective. Both contractual parties understand changing to the proposed method. We plan to formalize the forth component—the correction factor—throughout the term of the contract. It will eliminate the possibility for any manipulation.”

Fuel supply company representatives also expressed their support for formula pricing and discussed technical aspects of its application. In their opinion, it is important to consider how currency exchange rates are used as a basis for determining the price. “We need a mechanism allowing suppliers to decrease the negative influence of currency risks. Advance payment or agreement on a payment balance on the due date may be the option,” said Deputy Director of SOCAR Trading SA, Andriy Bychkov. According to Bychkov, the formula will help eliminate numerous petroleum market middlemen, preventing consumers such as SE Ukrzaliznychpostach from receiving faulty products.

Yevhen Kostenko, Deputy Director of the State Procurement Disputes Department, and head of the Complaint Investigations Division, spoke on behalf of Ukraine’s Antimonopoly Committee: “We do hope the new pricing formula will consider the interests of those competing for proposals and that importers’ risks will not shift to SE Ukrzaliznychpostach and the end consumer.”