Kyiv, July 3, 2015. Ceasefire in the Mariupol sector generally holds. “Russia-backed militants left a devastated Shyrokyne and retreated eastwards to Sakhanka and Bezimenne,” said Colonel Oleksandr Motuzyanyk, spokesman of the Administration of the President of Ukraine on ATO related issues, at the press briefing at Ukraine Crisis Media Center. 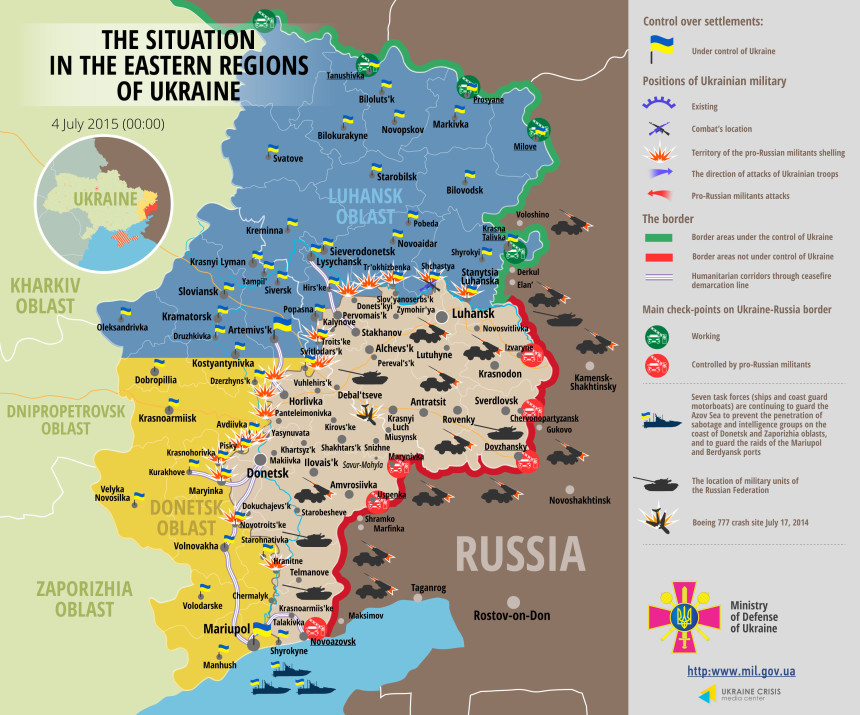 Militants used artillery and mortars in the coastal area only – from Sopyne to Shyrokyne. “At the same time, there have been armed provocations in Chermalyk, which damaged the local infrastructure,” added colonel Motuzyanyk.

In the Donetsk sector, most of fighting occurred westwards from Donetsk “Pisky was the hotspot of the conflict yesterday. Militants fired from tanks, 120mm mortars, as well as enemy snipers targeted our troops,” said Col. Motuzyanyk.  Other sites of conflict included outskirts of Horlivka where numerous cases of fire exchange were recorded close to Leninske and Kirove, although no case of heavy weapons use was registered.

Ukrainian servicemen spotted 12 militant UAVs in eastern Ukraine yesterday, as well as a Russian Мі-8 helicopter on the administrative line with the Russian-occupied Crimea.

Ukrainian Armed Forces did not incur any lethal casualties; four servicemen were wounded in action in the last 24 hours.

Security services uncovered an arms cache with explosives, weapons and ammo in the capital’s industrial district. They have seized eight ІМ-82 TNT blocks, six triton blocks, six blocks with opening for fuses and fuses proper, as well as AK-74U assault rifle with two magazines, SKS short rifle and a large quantity of ammunition.