Kyiv, July 6, 2015. A confrontation between Ukrainian troops and Russia-backed militants occurred in Stanytsia Luhanska and Shchastya, Luhansk region, yesterday. “Skirmishes of various intensity continued through the day. Two civilians were wounded in Shchastya. Other tense areas included Krymske and Zolote, Luhansk region. “Cases of heavy weapons in use in this area were not registered,” said Colonel Andriy Lysenko, spokesperson of the Administration of the President of Ukraine on ATO related issues, at the press briefing at Ukraine Crisis Media Center. 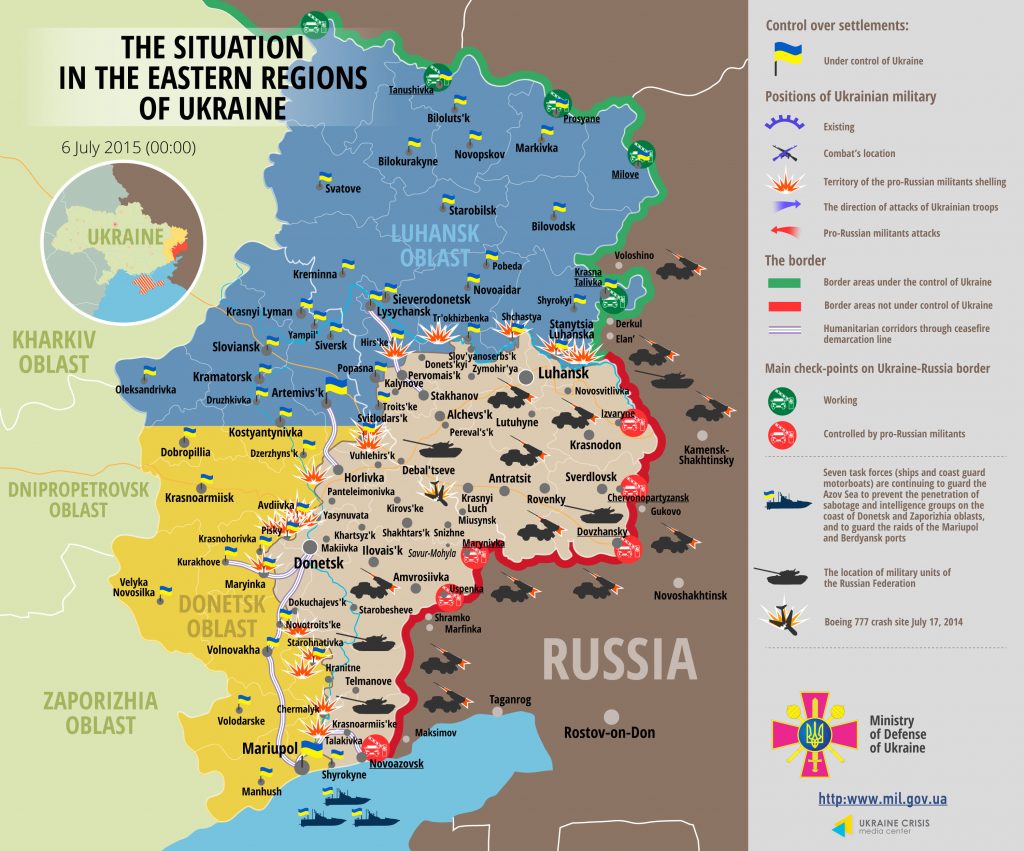 Militants continue firing on Ukrainian positions in the vicinity of Svitlodarsk, Donetsk sector. Combat also continues west along the front lines between Avdiivka and Maryinka. “The enemy amassed the highest number of heavy weapons in this area and is actively using them. As a result, towns located five to 10 kilometers from the combat line come under fire,” explained Col. Lysenko.

After militants left Shyrokyne, active combat operations in the Mariupol sector concentrated further south. Militants carried out provocations in the towns of Mykolayivka, Starohnativka and Chermalyk, mostly during morning hours. In addition to small arms, militants used mortars and howitzers to fire at Ukrainian positions.

Ukrainian Armed Forces did not incur any lethal casualties; three servicemen were wounded in action in the last 24 hours.

Ukraine’s Security Service detained a Kharkiv resident acting under orders of the militant group. The resident had already withdrawn large sums of money from bank accounts from the guarantor funds using forged documents. “The money in question was to be directed for the needs of the “DPR” militant group. It was discovered that the offender was going to deliver 44,000 hryvnias in cash to militants,” said Col. Lysenko.

Senior Sergeant Oleksandr Strelyuk received the grade III military medal “For Courage”. Three servicemen—sailors and a master sergeant —were decorated with the third-class Order “For Courage” and two officers with the medals, “For Military Service in Ukraine.” Rank II Captain Denys Ivanin of the “Hetman Sahaidachny” frigate received the medal for “Impeccable Service”. A total of 147 people serving in the Ukrainian Naval Forces including veterans and port staff received awards.