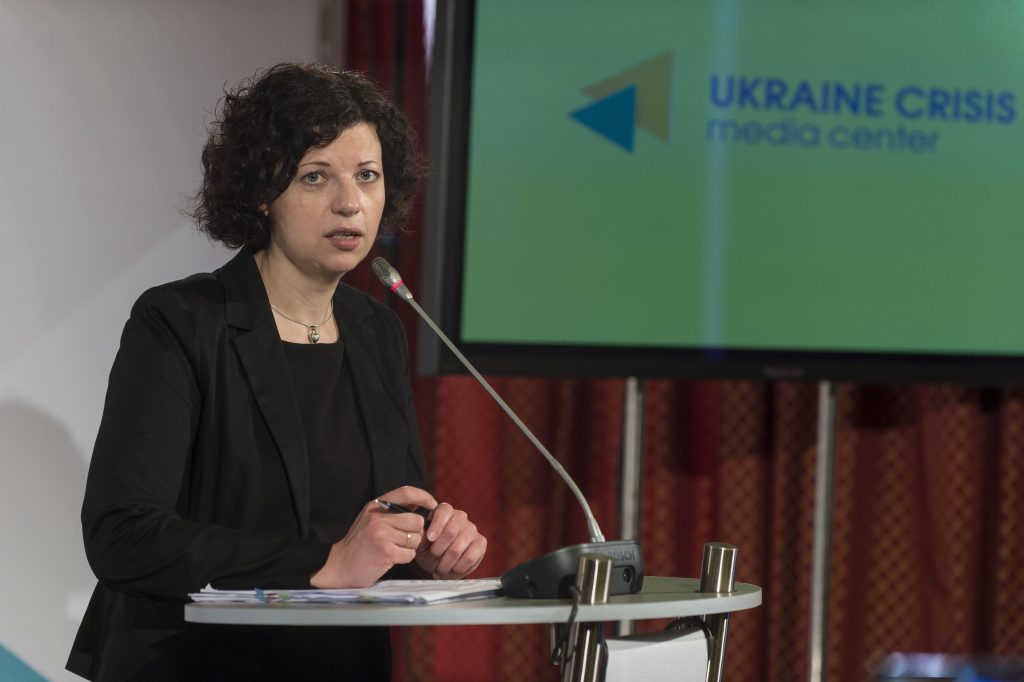 Kyiv, May 20th, 2014 – At least three Ukrainian activists and cultural figures are in thrall to the Russian FSB in Crimea. Neither journalists, nor public figures, or even lawyers do not have communication with the citizens of Ukraine. One of those arrested – Ukrainian director Oleg Sentsov can be transferred from Simferopol to Moscow. This was reported by the First Deputy Minister of Culture of Ukraine Olesya Ostrovska and a journalist Katherine Sergatskova at a press briefing in Ukrainian crisis media center.

Ms. Ostrovska stressed that there is a tendency to arrest citizens of Ukraine in Crimea.”Today we as the Ministry of Culture would like to express deep concern and anxiety due to the situation, which is happening with Ukrainian citizens in Crimea. These are not singular cases. In particular, we are talking about the director Oleg Sentsov. The situation is very symbolic because Sentsov belongs to a new generation of filmmakers, known and popular in Ukraine, bold in his experiments as well as known for his civic position. He is an active participant of Euromaidan and a man who has repeatedly expressed opposition to the occupation of Crimea by Russia”, – said Ms. Ostrovska.

The journalist Katherine Serhatskova who is an information coordinator of the initiative group for help to Oleg Sentsov, said that Oleg was arrested in Simferopol on May 11th and two days before FSB had detained his friend, resident of Crimea, Ukrainian activist Gennady Afanasiev. In addition, on May 16th another citizen of Ukraine – Oleksandr Kolchenko was detained. He is a community activist who conducted his activities in Crimea long ago, in particular actively supported the anti-fascist movement.

Ms. Serhatskova said that according to Gennady’s mother, there are attempts to accuse him of committing two terrorist attacks, the circumstances of which are not understood completely.

Katherine Serhatskova asked the representatives of mass media to cover the events that are now happening in the Crimea more broadly. “They are the citizens of Ukraine, who supported the idea of the country unity and got in a situation where there is an attempt to accuse them in the crimes they did not commit, simply because they supported the position, not approved by Russia”, – said the journalist.
Ms. Ostrovska said that the Ministry of Culture of Ukraine is in constant contact with the Ukrainian consul in Moscow, who also has the situation under control.

Katherine Serhatskova also appealed to people to support the families of the detainees. She said that Oleg Sentsov has two children, whom he has brought up alone for the past two years. One of them is nine year old boy Vlad, who suffers from early infantile autism. Families need financial support – both for a lawyer and children support. Also the families of Gennadiy Afanasiev and Alexander Kolchenko are in need of help, especially legal.

Olesya Ostrovska – First Deputy Minister of Culture; Katherine Serhatskova – journalist, an information coordinator of the initiative group for help to Oleg Sentsov – Ukrainian film director arrested in Simferopol by occupation authorities, accused of terrorist attack preparation and intended to be transferred as a prisoner to Moscow.